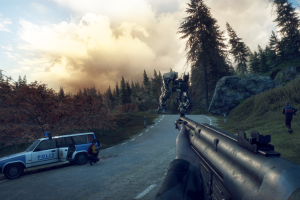 Its very possible that you’ve never even heard of Generation Zero, a small game developed by just a few people in Avalanche Studios. Developed on a relatively tiny budget, it’s the kind of project that more big companies need to do; small scale, more creative endeavours. So, Generation Zero is a primarily a co-op FPS that can be played solo if you like, made on a small budget and probably wasn’t even on your radar. But should it have been?

A small yet interesting snippet of news today that comes from a small interview with Avalanche Studios, creators of the Just Cause games, in the latest issue of Games TM, which just hit subscribers doorsteps today. Amidst other topics covered the magazine asked Avalanche Studios CEO Christofer Sundberg: […]

In the wake of the recent news that EA and DICE have acquired the exclusive rights to make Star Wars games Avalanche Studios have revealed that they were almost signed to make a massive open-world Star Wars game. former Avalanche Studio Manager Oskar Burman Tweeted: “Actually, wanting to work […]