Tag: Day of the Tentacle 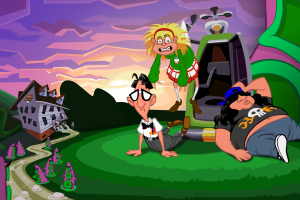 Best of Xbox Game Pass – Day of the Tentacle: Remastered

It’s time to take a trip into the murky past, into the olden days of gaming when point and click adventure games thrived and everyone was well versed in their frequently baffling leaps of logic. First released back in 1993, Day of the Tentacle is actually a sequel to 1987’s Maniac Mansion, not that you need to know anything about that game to enjoy its sequel.

Platforms: PC Reviewed On: PC Developer: Double Fine Publisher: Double Fine Singleplayer: yes Multiplayer: No Review code provided free of charge by the publisher. I grew up playing point and click titles, and watching my mum play them, too. From the Monkey Island games to Discworld and Discworld […]

Fellow point and click fantatics rejoice because Tim Schafer of Double Fine today announced that the classic Day of the Tentacle is getting a special edition! If it’s anything like the awesome Monkey Island special editions then expect beautiful new graphics along with the ability to change back […]