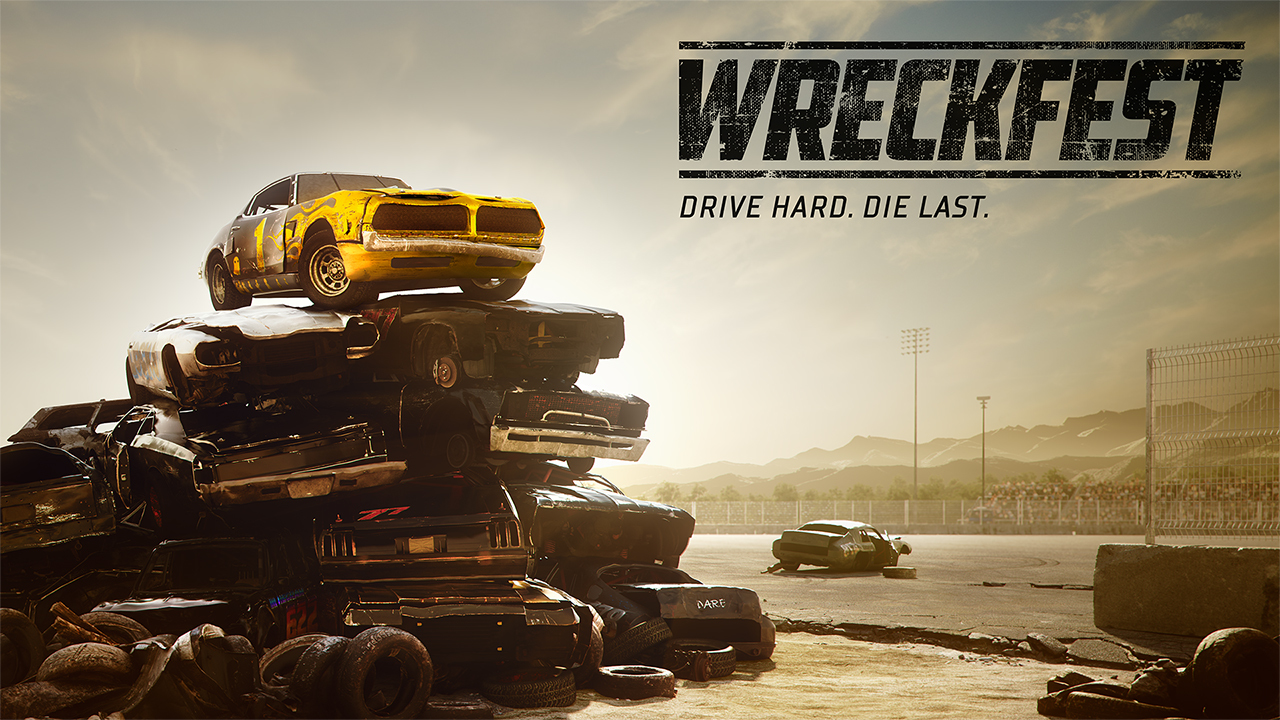 What a journey Wreckfest has had. I remember previewing it years ago while it was simply known as Next Car Game and was composed of a physics playground and a few tracks. At the time Bugbear was unsure exactly where they wanted to take the game, and over the years there were moments where it seemed the Early Access project had been abandoned. But after a bunch of work, feedback and a renaming Wreckfest has stumbled out of Early Access with a purpose; bring back destruction derby.

This month I reviewed Onrush, another game that focused on a lot of smashing, but unlike Onrush this is a more traditional racer and considerably less bombastic, yet still very enjoyable in its own way. The first corner of every race is an epic pile-up that you pick your way through, and after that it’s a rough and tumble battle to the end. Smashing into other drivers is encouraged though the soft-body physics system that allows cars to be dismantled, and indeed careening into someone is probably the best method of getting around a corner if you can pull it off.

The key to everything is in the handling which is arcadey but weighty. Most of your time will probably be spent sliding sideways around the assortment of tracks, enjoying the feeling of heft every car and truck has and how you can really feel the tyres desperately seeking the grip needed to launch you forwards. Bugbear want you to understand that you’re lugging around a chunk of metal capable of wrecking stuff, but they also want you to throw said chunk of metal into corners like a freaking lunatic, and somehow, possibly via black magic, they found a way to successfully do both. It isn’t the most nuanced system that begs you to keep finding that little bit more speed, but it’s the remarkably good fun in its own right and lends itself perfectly to the smashing and bashing nature of the game.

Gravel, dirt and tarmac are sadly the only surfaces to contend with, the likes of snow and rain being nothing more than a pipe-dream at the moment. Maybe we can hope for these to be added in a future update as I’d love to tackle some of the tracks in a torrential downpour of rain, fighting through the mud and puddles. Still, Bugbear ensured that the differences in surface feel pronounced which really helps add to the fun on the mixed-surface races.

Tuning plays an important part in everything, too, despite the options for tweaking being pretty limited. You can only play around with the suspension, gear ratio, differential and brake bias using sliders, but much like the differences in surface Bugbear have made sure that each change can be felt on the track, making it worth your time to amble into the tuning menu before each race. However, because the tuning options are so shallow this quickly becomes a chore since you only need to have a split-second gander at the track information before doing a few basic changes. Still, by keeping it simple and making each change pronounced Bugbear have made sure that it doesn’t end up like some other racing games where you can spend ages in the tuning menu without feeling that much of a change on the track.

Your opponent’s present a mixed bunch in terms of intelligence. Ramp up the difficulty and they’re very fast and able to present a good challenge, but they also have suicidal tendencies, happily changing direction mid-corner to t-bone you into a wall. Sure, it’s a racing game that is more than pleased when you smash stuff up, but you typically only crash into another car when you can be sure you’ll be better off because of it, whereas the A.I. just seems to have these sudden changes of personality where destroying you becomes their entire goal in life, even to their own detriment. But this does create the illusion of racing against real people who are prone to snapping because they got a bit angry.

The weird thing about the game, though, is that despite its own name actually crashing into other cars is the stupid option. Keeping it safe and clean is the best way to win races, and while you can certainly pick a few other cars off using a carefully aimed slam or P.I.T. maneuver you’re usually better off just getting past everyone as fast as possible. Even in the destruction derby events powering into other cars isn’t a good plan; the goal is to the last car driving, and hitting other cars means taking a good chunk of damage yourself, so really to win you need to drive around in a circle, only occasionally hitting something in order to keep the contact timer happy.

It’s annoying because Wreckfest makes smashing stuff feel some raw and brutal and pleasing. The physics system that Bugbear have crafted lets cars get ripped apart and wind up looking like crushed wrecks by the end of a race or derby. Even with damage set to realistic, though, the actual performance impact of getting beaten up is minimal at best, which I’m conflicted about; on the one hand, having to limp a car around could be fun, but on the other maybe it’s for the best that you’re car can’t be turned into a cripple in the very first corner.

The career mode is pretty typical stuff but has a few key problems holding it back, in my opinion. To progress, you’ll enter into various events that span regular races – albeit still with lots of crashing – destruction derbies, lawnmower races and a few other special events, and earn points for doing well in them. Earn enough points and the next championship opens up, but fail to do so and you’ll have to replay events to gather up the points you need. This comes back to my opinion earlier about crashing, bashing and having fun actually going against progressing in the game. You need to win to keep advancing, and that means you have to be more selective about destruction than you probably want to be in a game called Wreckfest. Meanwhile, some events in a championship can only be undertaken by having a certain type of car, so again you can find yourself replaying other events to gather up the cash needed to either upgrade an existing car you own to the required class or to buy a new one.

The career shouldn’t be written off, though. While it might have some design flaws that left me feeling a tad annoyed, including an annoying driver level requirement that stopped me from getting B class cars until I’d replayed multiple events, there’s still a lot of fun to be had from working through the championships, and some of the special events can be a good laugh. Who doesn’t want to watch combine harvesters crashing into each other? Or use a bus to crush a bunch of little vans?

Along the way you can spend cash to upgrade your cars by purchasing new engines, intakes, pistons and more. Strangely, though, none of the upgrades you can buy will increase handling, but I can only assume that’s to ensure you don’t just pick an incredibly fast but crappy handling machine and make it take the corners like a pro. You can also throw some cash into adding armor to a car, sacrificing speed for raw strength as well as added weight so that you can pummel everyone else more effectively, turning even a harmless looking machine into a battering ram. Finally, you can pick up some paint jobs and minor cosmetics if you fancy making your cheap banger look like…a slightly better cheap banger. Given the freedom Bugbear have with this game in terms of not having licensed cars the very limited customization feels like a big missed opportunity, as indeed does the relatively sparse roster of vehicles.

Outside of the career, you can create custom events that will still grant you cash and experience points, but you also get the added bonus of getting to pick from a pretty good range of tracks and event types while also choosing what class of vehicle is allowed and more.

Online presents a few problems that all stem from the people rather than the game itself. There isn’t a huge online presence as I write this, and quite often when you get into a race you’re instantly greeted by people declaring “No CRASHING!” despite them playing a game that is clearly about doing just that. But when you can get a proper race going or a destruction derby event it is a whole lot of fun.

It’s nice to see a game come storming out of Early Access without too many bugs or issues holding it back. There are a few hiccups here and there like experience points not being granted because the game didn’t register you shoving someone into a wall like it should have, but I never ran into anything serious.

And considering the relatively small budget of Wreckfest the Early Access period seems to have done wonders for the graphics. This is a pretty game. Obviously, the damage modeling is a highlight but almost everything else deserves some praise too; the car models look nice and detailed, the tracks themselves have some nice splashes of color and it all manages to run extremely well. The only real issue is that the cockpit view doesn’t include any driver arms or hands, so you just have a wheel magically turning itself.

The audio is a tad more mixed. We get a rock and roll style soundtrack that doesn’t click with me personally due to some of the choice of songs, but that’s a highly subjective thing. The audio mix, though, means that if you want to actually hear the music over the sound of the engines you need to turn the sound effects waaaaaay down. There’s also an irritating issue with the fact that engine noises of cars behind you often sound much, much closer than they actually are. On top of that the sound of metal being crunched, dented and ripped isn’t as savage and visceral as it should be. But in the game’s favor, the cars sound awesome. In short, the audio is merely just okay.

By sticking to the traditional racing concepts of laps and finishing first Wreckfest perhaps holds itself back unlike the manic Onrush which fully embraces its destructive tendencies. The need to come first in the race or even in the destruction derby holds you back from fully embracing the carnage. However, with that said it’s still a really fun racing game with a solid handling model that just so happens to encourage more aggressive overtakes than something like F1 or Forza. Plus, you get the added fun of taking part in full-on destruction derby events and while you might have to skirt around the edges of the battle more than I’d like it’s still good fun to pick a target, charge in and utterly wreck it. So while I have some reservations about Wreckfest I also had a lot of fun with it