Thanks to MadCatz for providing this game for review.
(NOTE: This review is for the Collectors Edition of Damage INC, which includes a joystick)

Let’s face it, for what is supposedly a “historically accurate” way to experience “the ultimate thrill as a WWII fighter pilot” the title Damage Inc. doesn’t inspire much confidence in that statement. Sure, we shouldn’t judge a book by its cover but the arcadey sounding title of Mad Catz Interactive’s first PS3 flight sim venture says a whole lot about the game at large.

Created for what seems to be the sole purpose of showing off their new Saitek Pacific AV8R FlightStick, Damage Inc. Pacific Squadron WWII is, unsurprisingly, a recreation of 23 missions undertaken by the US Airforce over the Pacific. Starting at Pearl Harbour you’ll fly various missions around the Pacific theatre, showing those pesky Japanese whose boss.

However, while you may be excited that the consoles are finally getting some more flight simulator love you best cool your jets before you shell out the rather steep asking price for the special collectors edition (the one that includes both the game and the AV8R).

You see, Damage Inc. isn’t your average WWII flight sim. While it prides itself on being an authentic WWII experience there’s not a lot that upholds this value. Oh, of course you fight battles that were fought at the time in planes that look like their real world counter parts but the very essence of the game is strictly arcade. As the game includes two difficulty levels, arcade and simulation, you would expect there’d be a stark difference. Unfortunately, you’d be greatly mistaken…

There are aircraft stats, which actually don’t make a whole lot of difference, there’s a slow-mo ‘reflex’ mode, radar mini-maps and a “War Speed!” mechanic that some how gives your little propeller driven aircraft a break neck speed boost. Add to this unlimited ammo, useless friendly AI, HUD targeting modes and a sense you’re winning the war all on your own and it’s starting to feel a little like ‘Call of Warplanes’ than a historical combat simulator.

Everything about Damage Inc. screams an arcade experience. Granted, realistic combat sims are often overly complex and the limitation of controls to actual buttons ratio on consoles really doesn’t help but when you’re able to shoot down over 200 Japanese aircraft in a single mission without breaking a sweat something’s got to give.

And I’m no flight sim maniac either. I’ve played a bit of IL-2 Sturmovik, quite possibly the most realistic WWII flying game you’ll find out there, but I’ve got nowhere near the micro management skills needed to fly successfully, nevermind keep my aircraft in the air. The fact of the matter is though, Damage Inc. just isn’t that fun, even when it embraces traditional gameplay over realism.

Aside from the gameplay mechanics that have more in common with your average First person shooter than a historical flying game, the technical side of things is also a little worse for wear. In games such as Birds of Prey and Ace Combat we’ve seen beautiful vistas, ground textures and buildings that make you believe you’re there, but with Damage Inc. it’s a whole different story.

The Pacific paradises we’ve all come to associate with thanks to films such as Pearl Harbour and Pacific are reduced to nothing more than murky drab landscapes that are near impossible to see. As the ground looks like one huge mush of browny greens the game’s targeting system, which consists of putting a massive arrow above any aircraft, makes the guess-work a little easier but trying to find ground units or even aircraft that end up blending into the background is frustrating at best.

Add on top of this the stuttering frame rate which plummets when your aircraft goes into “War Speed!” mode and the game is made more of a chore to play than anything resembling fun.

On the other side of this is the joystick included with the collectors edition, the real reason the game was made and possibly the only reason to buy it in the bundled format. The Saitek Pacific AV8R FlightStick is a flashy little USB joystick that’s usable on both PC and whatever other format you bought it for.

For all intents and purposes the AV8R is a good little joystick at the budget price of £54.99. For the PS3 version you’ll get 3 programmable top buttons, a view ‘hat’ stick, 10 possible buttons along the bottom and a throttle all in a small collapsible package. If you can get past the overly Americanised paint job there’s nothing to stop you using the stick on practically any game on console or PC that needs one.

It’s a good product with a lot of programmable buttons for all your flight sim needs and a responsive stick and great compatibility options. One downside however is that the grip feels like you’re holding a cheese grater. The website assures me it’s removable but I’m none the wiser as to how you’d go about that without taking an industrial sander to it…

All in all, the Damage Inc. collectors edition is a really bad way to buy a really great joystick. The game is clunky both technically and gameplay wise and quite possibly the worst WWII flight simulator for the money around. If it had been released as an arcade title at £15 it might warrant a look, providing some arcadey flight sim fun for a couple of hours but as it stands it really isn’t the ultra realistic, authentic WWII experience it claims to be. 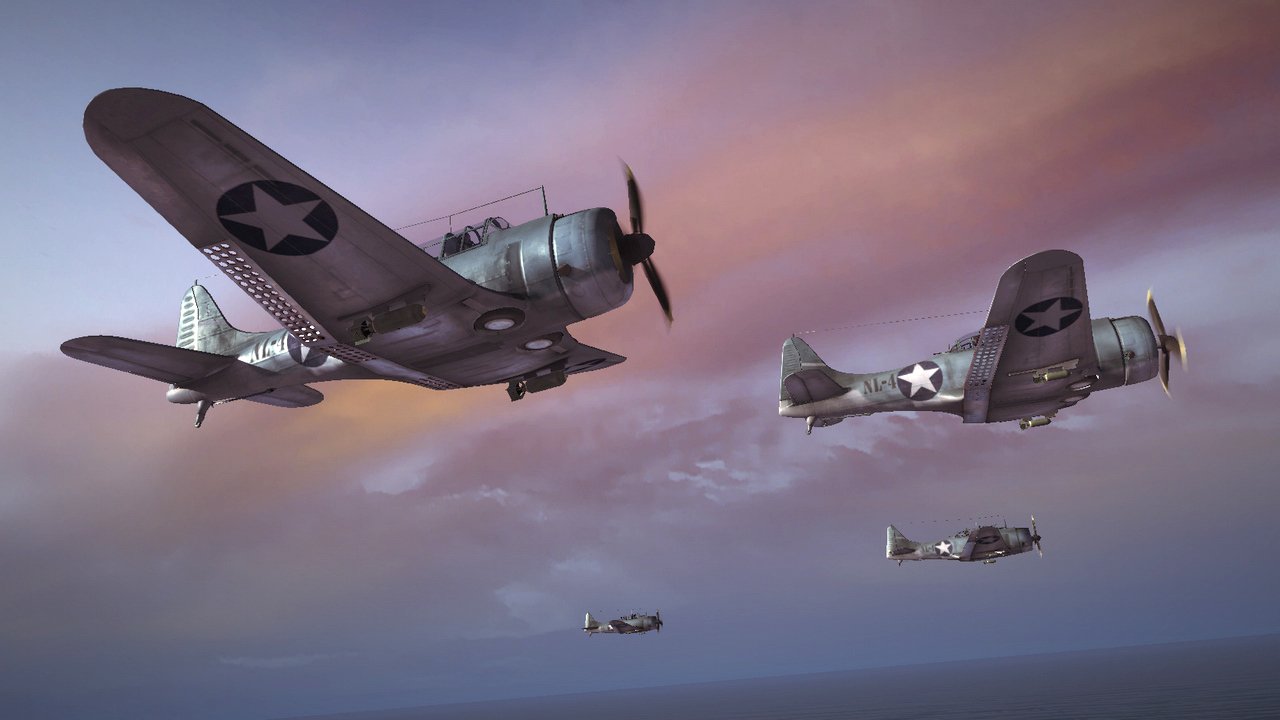 If you’re looking for some WWII aircraft combat you could do a lot better than Damage Inc. PC gamers in particular have been treated to such greats as IL-2 Sturmovik while you can pick up the console equivalent Birds of Prey for ridiculously cheap now. My advice? Buy the AV8R joystick separately if you’re in need of a great budget stick but otherwise steer well clear of Damage Inc.

The Bad:
– Too Arcadey for the price
– Dull graphics and some stark frame rate issues.
– No changeable difficulty levels

Graphics: 5
Dull textures that make it hard to see anything are a crying shame since many of the aircraft models are beautifully detailed in the model viewer.

Sound: 7
It’s all very gung-ho Americanisms in the voice acting but there’s enough NEOWNG and PEW PEW to satisfy any aircraft enthusiast…

Story: 3
If you know at least the basic history of the Pacific theatre then there’s no need to listen to the hammed up acting going on. There’s no overarching story to be found here that isn’t strictly historical.

Gameplay: 4
For a game that prides itself on giving a realistic war experience there sure is a lot of arcade mechanics that make the game just too easy to be of much enjoyment.

Lifespan: 3
Once you’ve beaten the singleplayer, if you can endure it, there’s not much to draw you back to this lackluster title.

The Verdict: 4
Unless it comes down dramatically in price there are a lot better WWII flight simulators out there to satisfy your flying needs. As for the Joystick however it’s a great budget bargain if you buy it without the shoddy tie-in title.