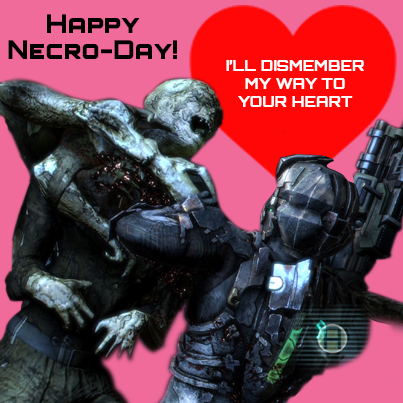 Valentines Day has snuck up on us like a fat man sneaking up on the all you can eat buffet in Pizza Hut, and what better way to celebrate the day than winning yourself a weapon pack for Dead Space 3 and dismembering some Necromorphs? The correct answer to that question is that there is no better way, just in case you were wondering.

That’s right, Visceral Games has kindly handed me some codes to give away for their latest entry in the Dead Space franchise:

“Happy Valentine’s Day! As a way of saying THANK YOU to all our passionate Dead Space fans, Visceral Games is giving away free download codes, good to redeem for the eight weapon, suit and scavenger bot upgrade packs in Dead Space 3. The codes allow the winner to share with a friend or with your significant other.  All in the name of love…and Necromorphs!”

I’ve got a total of three different packs on offer, with one Xbox 360 code and one Playstation 3 code available for each pack, meaning there’s six codes to give away to six lucky people! Before I get into how to win these, though, I have to warn you that this competition is for US residents only! Sorry, everybody else!

So, what are the packs on offer? Well:

Right, so how do you win this stuff? Simple: first, make sure you actually own Dead Space 3, because that would sort of be helpful, and otherwise you might look a bit stupid winning a code for a game you don’t even have.

Then, pick which pack you want! Choose wisely, because it’s limited to one entry per person. Then just send an Email to this address: badenronie@wolfsgamingblog.com
Make sure you put Dead Space Competition in the subject line so I don’t just assume you’re some evil stalker intent on doing unspeakable things, and then in the body of the Email put: “I wanna kill me some Necromorphs with the *insert name of the pack you want to win*.” After that just tell me which platform you want the code on, Xbox 360 or Playstation 3.

The Competition will close on February 18th at midnight GMT time. I’ll send out Emails to the winners on February 19th. Yes, I am aware that means you won’t be winning the codes on Valentines Day, but this way it gives everybody a chance to enter.