AfterView: Addressing The Night of the Rabbit’s Pacing Problems

Hello. Hi. Hey. Aloha. Smegski……Sup? And welcome to the first ever edition of AfterView, which is the name I’m giving to a new series of articles in which I talk about more specific points or aspects of a game that I’ve just reviewed, allowing me to go a bit deeper into the title in question and address things that perhaps don’t have a place within a review. I admit that the idea is shamelessly ripped from Edge Magazine’s Post Script pieces which sit opposite the game review.These articles will sometimes be spoiler free, and other times will be so completely packed with spoilers that merely looking in their vague direction will cause you suddenly know everything that will ever happen.

So, for this first article I wanted to delve into a certain point that I brought up during my review of The Night of the Rabbit, namely that I felt its story had serious pacing issues, marring the otherwise great story. It’s very easy to criticize games from the outside, and I firmly believe that you don’t have to be an expert in how the medium you’re talking about is crafted to render a judgement. For example, I don’t think a film critic needs to understand every single thing about how a movie is made to be able to tell if it worked or not. But sometimes it’s good to take one of those criticisms and say, “okay, so how would I have done this?” That’s what I’m doing today: I’m going to talk about how I would have handled the pacing of The Night of the Rabbit’s storyline. I’m not saying my version is right or wrong, because I’m no expert at this writing malarky, as demonstrated on a near-daily basis within this very site, but it’s healthy to look at these things because by doing so it can broaden your perspective, and that can never be a bad thing.

As such, SPOILER WARNINGS! Since I’m dealing entirely with the game’s plot here I will be talking about various aspects of it throughout this article, and so I highly recommend that only those that have completed the game or those that have no intention of doing so proceed any further. You have been warned. What I’m getting at here is that you read this article anyway and then send me a message complaining about how I spoiled the entire game for you I’m just going to laugh at you. Got it? Good. 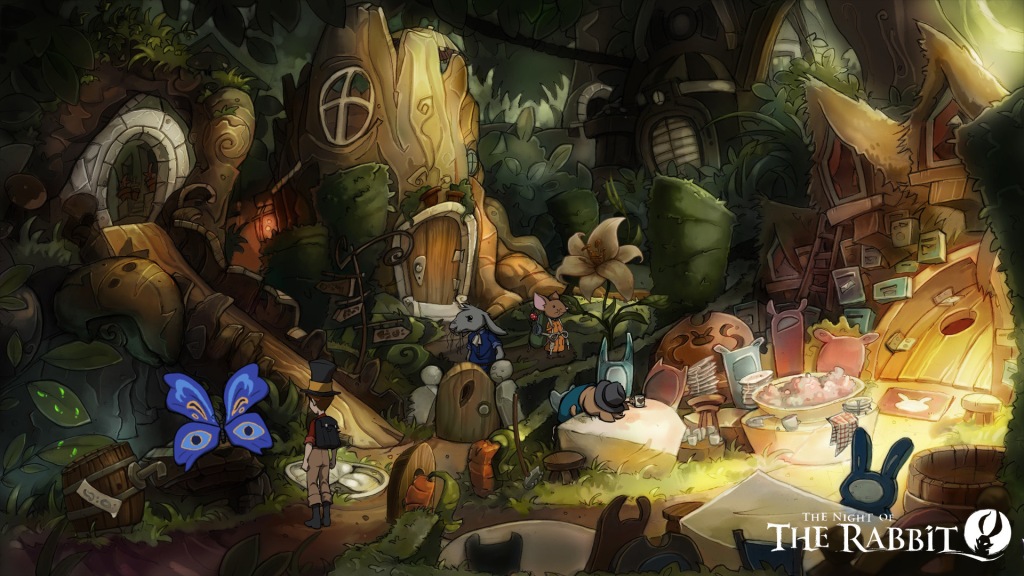 Pacing problems or no, it’s a beautiful game.

First I must lend voice to my original complaint, though, to ensure we’re all clear on what my criticism was. My issue with The Night of the Rabbit’s story stems not from the actual tale itself, which features some lovely dialogue, characters and twists, but the way it’s told throughout the game. For the first half of the game there’s very little progress made in terms of the narrative, and then in the second half the pace picks up massively, but only to deliver lots of layers without any answers to reward players with for their hard work up until that point. The the finale is delivered in a video which picks up every single plot element thus far, mixes in a load of new ones and answers them all in just a few minutes, creating a story overload that assaults unsuspecting players. As a result I found the pacing to be almost jarring, jumping from sluggish to fast and then to downright hyper, making it harder to appreciate everything that occurs.

Before I begin proper as well let’s quickly recap the events at the end of the game. So, in the final video we get to learn that the evil Zaroff was once the apprentice of the Marquis De Hoto. The Marquis took him on many grand adventures, until one day they encountered a strange mirror which showed them the darkest recesses of their souls and turned them slowly evil. After a while, a rift formed between apprentice and master, and the Marquis banished Zaroff back to his world, where he eventually escapes from. As for the Marquis that you’ve had as your mentor during the game, he’s actually a memory from the main Portal Tree, a memory formed before the Marquis became evil. This is the most important fact that I’m going to be using in my small rewrite of the storyline, so keep it in your head!

So, exactly how would I pace this story out over the course of the game? Well, it requires some slight modifications to how the tale is told.

The first thing I’d do is have Zaroff introduced fairly early on in the game, probably within the first few hours, by way of one of one of the town council talking about him, and how he is feared across the worlds. By introducing Zaroff this early, but without actually seeing him, we could build a sense of suspense for the player, especially once the Zaroff posters start to arrive in town, advertising his forthcoming performance. We can also introduce a sense of mystery when the townspeople start to talk excitedly about Zaroff and his coming magic show. Weren’t the townsfolk only just talking about how feared he was? Were they not just whispering his name, yet now they’re loudly and cheerfully shouting it? This of course links in the magic spell of Zaroff and how he is able to draw people toward his act, something which we discover later. As the first half of the game goes on and more and more Zaroff posters get put up, and the people get more and more excited about his arrival, the player should hopefully remain in suspense, scratching his or her head in regards to what’s going on.

But wait, you cry, what about the Marquis? Wouldn’t he know exactly who Zaroff is? Well, yes, he would, except that in my version of the story Zaroff is not his given name, it’s only a moniker that he assumed after parting ways with the Marquis. For the purposes of this article we’ll say that Zaroff’s actual birth name was Bruce Wayne. In the story finale it will be revealed that upon finally managing to free himself from his imprisonment Bruce reshaped himself, donning the mantle of the Great Zaroff. Because the Marquis that we know and love is a memory of the original Marquis created before he and his apprentice, Bruce, turned evil, our version of the Marquis De Hoto would have no idea of who Zaroff is, helping to keep the player in the dark, though I’m sure the Marquis would have some suspicions. For added measure the actor playing the Marquis also wouldn’t be told of this little revelation, to help make the Marquis sound as genuine as possible when speculating about who Zarofff is and when telling the player that he has no idea of Zaroff’s identity. Of course, some players may begin to have their suspicions, but that’s fine because it means they’re paying attention and developing theories – their minds are active and caught up in the story, which is what we want.

This would hopefully mean that the first half of the game has some solid narrative progression for the player to get invested in, and should also hopefully create an looming sense of dread and interest because Zaroff is coming and they’ve heard so much about him. In its original form the storyline simply has Zaroff posters appearing around town, and while I was mildly interested in who Zaroff was the lack of information on him for a good chunk of the game meant that I pushed him to the back of my mind for the most part, which is a real shame.

As the game progresses we can have the old magician that you meet in Mousewood reveal to the player that the Marquis had another apprentice before you. Coupled with the Moth’s later startling accusations toward the Marquis, calling him the “Cold One”, this should be more than enough for any player to be having some serious doubts about the Marquis, but of course the Marquis will still be protesting innocence, and rightfully so. What I like about this idea is that the game’s story would then letting players make an assumption based upon the evidence, an assumption that is actually partially wrong: yes, Zaroff is the Marquis De Hoto’s former apprentice, but the Marquis before you is actually telling you the genuine truth, that he had no idea who Zaroff is. In fact, technically Bruce Wayne was never your Marquis’ apprentice, because your Marquis is merely a memory. This would give us some good conflict between Jerry and the Marquis, especially if the Marquis was revealed to have had some suspicions about Zaroff’s identity and simply kept quiet about it, and some even better character moments for the Marquis’ himself, as he struggles to understand what is going on. Does he know he’s a just a memory?

After that the story would progress pretty much as it originally did in the game, with everything being fully explained in the final video. Obviously by this point a few revelations would have been taken away from the finale, but I feel that by doing so we’d get a stronger tale delivered throughout the game.

Alright, so there we have it, my own personal attempt at validating my criticism of the game, of expaining, in a vague way, how and why I felt that the pacing was off.  Once again I’m not claiming that my method for portraying the storyline is somehow right or even better than the actual game’s, but I’ve enjoyed getting to think through how I’d handle it. It’s so easy to sit there on the outside and throw rocks that sometimes we forget how much work actually goes in to creating the games we play, and it’s good to try to get into the minds of the developers and, “Alright, so I think this aspect of the game wasn’t done very well, so how would I do it, then?”

Tagged as: night, of, pacing, rabbit, the