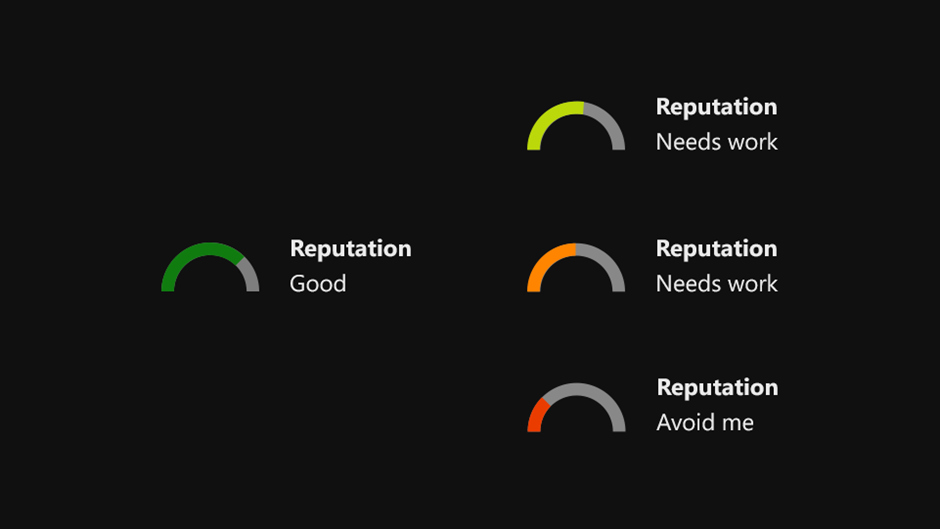 Microsoft have lifted the lid on their new reputation system for the Xbox One, which aims to penalize player’s who get large amounts of complaints filed against them over a period of time by removing certain privileges.

The new system works via a simple coloured gauge shown on your Gamercard. Should your reputation at any point move from green into the “Needs Work” category you’ll get an official warning from Microsoft that politely asks you to improve your online behavior. These warnings will begin to get sent out this week:

“The purpose of these communications is to remind players about their effect on the community and encourage them to have more positive interactions. These warnings are based on community feedback collected since Xbox One launched.”

Continue to be a pain in everyone’s arse and the gauge will go down further and you’ll begin to get paired up exclusively with other Xbox Live members at the same reputation level, potentially creating black holes of  foulness.  Apparently users may also have certain privileges removed, such as the ability to stream gameplay via Twitch.

“If players do not heed warnings and continue to have a negative impact on other players and the Xbox Live community, they will begin to experience penalties. ”

Microsoft also say that they have plans to introduce a reward system for players who remain in the good reputation bracket, though did not confirm what they may be. Things like a week of free Xbox Live or even a game spring to mind.

Naturally this new system raises some concern that gamers could find themselves getting penalised due to angry gamers filing reports for no other reason than spite, but Microsoft assured gamers that a couple of complaints won’t see your reputation drop through the floor.

“Remember, we designed the algorithm so it won’t penalize you for bad reports over a few weeks of play. The system also adjusts for false reports from people that might intentionally report someone of greater skill or for other griefing purposes.”