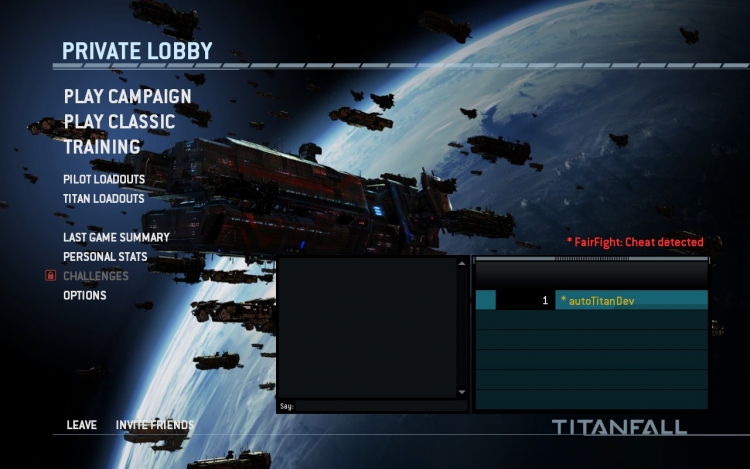 Respawn have finally begun the never-ending task of battling cheaters in Titanfall, but they’re doing so with a stylish twist that can’t help but bring a smile to my face.

On the 21st of March Respawn officially began banning PC users using the FairFight detection system, which it must be said has its fair share of critics. The system essentially works by monitoring player’s stats, looking for those who are getting a suspiciously high amount of headshots from great distances in order to determine whether or not an aim-bot is at work. The system has been rather controversial, though, as many people argue that it doesn’t do its job very well. Respawn have stated that they’ll continue to tweak the system.

Regardless, if someone using aim-bot tech sees the “FairFight: cheat detected” message, as shown above, when they next load up Titanfall then they’ve been caught out by the system, at which point the fun begins. Rather than simply banning them from Titanfall altogether, they’ll instead be allowed to continue playing, except that now they’ll only be placed in games with other cheaters, in what Respawn happily described as, ” the Wimbledon of aimbot contests.”

“Hopefully the aim-bot cheat you paid for really is the best, or these all-cheater matches could be frustrating for you. Good luck.” They cheerfully continued.

Furthermore, if a known cheater enters a non-cheaters party, then that entire party will be treated as cheaters for that play session, Don’t worry, though: you won’t be marked as a cheater yourself – you’ll be able to go back to playing regularly as soon as the cheater leaves your party.

“You do not get permanently tainted just by playing with a cheater – you are only banned for cheating if you are actually cheating.” Respawn assured.

It’s a clever system, and one that actively encourages people to essentially disown cheating friends. Should you suddenly find yourself in a game full of aim-bots, you know someone in your party is using methods they shouldn’t, and they’ll have to either own up or continue ruining everyone’s evening.

Personally, I’d quite like to watch a match or two full of aim-bots, just to see what the outcome would be.