This game was tested using an AMD Radeon HD 7790 graphics card kindly supplied by AMD. Click here for details on that, the Radeon HD 7790 and the test system used for all PC games.

As you may have already guessed from the straightforward title Kill the Bad Guy is all about killing bad guys. You work for a shadowy agency and each level tasks you with assassinating a douchebag whose unique brand of douchebaggery is explained to you via text in an attempt to give you a reason to hate your target. It’s a game that revels in a straightforward premise that neatly sidesteps the modern trend of having darker, complex setups.

While the global media would probably love to describe it as a brutal murder simulator, Kill the Bad Guy is ultimately a puzzle game, one that’s hiding under a dark disguise and armed with a black sense of humour that manages to miss as often as it hits. Whomever was in charge of writing the brief biographies of your victims attempts to weave in a black sense of humour, but it comes across as weak, especially when paired up with descriptions of real-life killers. Your victim trundles through the level, and its your goal to figure out how to kill him while making it look like an accident, an element of the game that quickly becomes absurd as most of the intended methods of murder don’t remotely resemble an accident. The game grants you a couple of “days” to perform the kill, essentially meaning you can use the first day and the pause button to investigate the objects in the level, sabotage anything you think you might need and watch the victim’s chosen path, which he’ll repeat in the next day. You simply need to figure out, using the tools provided, what the intended method of death is and how to carefully herd the target into the killing area, which becomes far more important later as you’re not allowed to execute the hit in view of cameras or civilians. And for bonus points you can also perform the secondary objective, which is a specific method of death, grab the hidden passport and snatch up the tooth that flies from the victim’s mouth upon being squashed/sliced/hacked/run over. 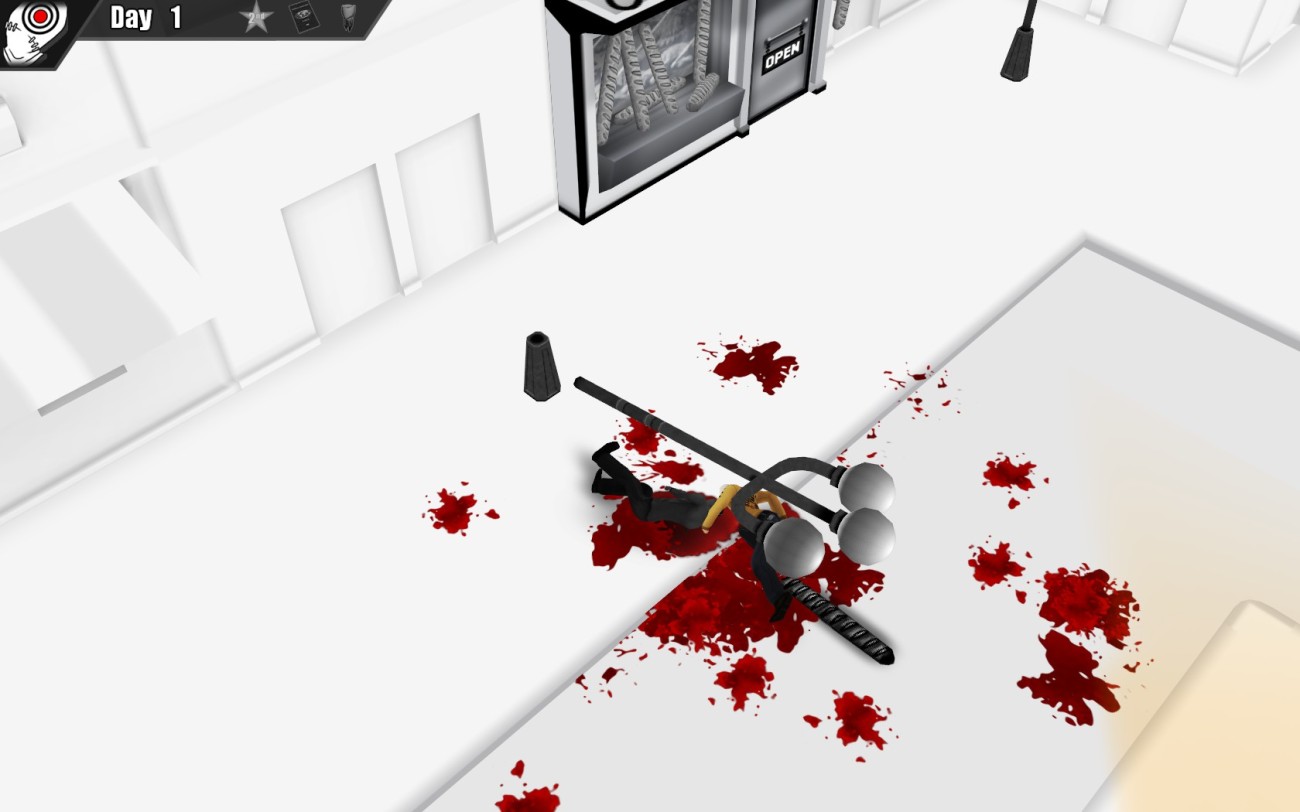 Dotted around the white and grey landscape are objects that can be interacted with, signified by their darker coloring, and even combined. A car, for example, can be sabotaged and then used as a missile to be launched at the unsuspecting victim, a tree can be felled to squash whomever is unlucky enough to be under it, or it could even be turned into a catapult for a piano, if you so wish. Electric lines can be cut so that they land in a pool of water you created, and ropes can be stretched across poles to create a vicious crossbow used to fire sharp bolts. Meanwhile stop signs, broken glass, barriers and even dead dogs can all be used to redirect the villain. All of this must be done without making the victim suspicious, or else they’ll do a runner.

When it’s all working in tandem there’s a simple pleasure to be taken from playing Kill the Bad Guy. Distracting a victim with carefully placed porn magazines before impaling him to the passing police car with a spear is immensely satisfying, as is carefully redirecting your target using dead dogs and signs in order to drop something heavy on his head, or decapitate him with a whirling blade of death. While the written comedy fails, the absurdity of your target’s deaths and the strange sense of joy it brings successfully creates a game with an invitingly dark sense of humour. It’s like a Saturday morning cartoon with lashings of blood.

Every level presents you with a brief description of the target and all the horrible things he has done in an effort to make you feel a bit better about the forthcoming bloodbath, but none of it actually ties into the gameplay. It would have been great to be able to kill them in a manner relevant to their crimes. Before long the static descriptions begin to blur together, and you’ll likely stop paying attention to who you’re killing or why, especially given that every bad guy has exactly the same character model.

However, it is worth paying some attention, because there’s an interesting sub-plot going on that may, or may not, have been intentional. The people you’re killing have supposedly escaped justice, but ultimately you’re murdering them solely on the word of a strange agency who provide no actual proof of their crimes. They merely tell you why someone is bad, and then order you to execute them. Furthermore several of your victims aren’t actually very evil, such as the man accused simply of insisting on doing the backstroke when the pool is a busy, something which I admit irritates me but hardly warrants a grisly death. For players that like to theorise and read between the lines, then, there’s quite a bit here to think about. In terms of actual narrative, though, it’s largely non-existent. The name of the game pretty much is the story, and that’s fine.

But by far the game’s biggest problem is just how linear it actually is, and how quickly the concept begins to wear thin. Rather than giving you free reign over a level with numerous potential ways to massacre your target,  you’re hemmed into a tiny location and must simply determine the exact method of death that the developers had in mind, with a second potential demise hidden away as the secondary objective. At first it’s fun to contemplate the tools of death at hand and work out exactly what needs to be done with them, but it doesn’t take long for this to become boring and the desire for more freedom to sink in. Later levels do open up a shade and may give you the tools to perform a couple of different assassinations, but you still feel remarkably restricted, while the various methods of execution also begin to repeat themselves very early on. There’s only so many times you can perform a variation of crushing someone before it becomes a little dull. In the developer’s defense creating enough methods of killing baddies to fill even half the game must have been quite the challenge.

I mentioned this in my review of Project Temporality, but it does warrant repeating; the greatest puzzle games create the sensation that as the player you’re outwitting the game and the creator, despite knowing deep down that you’re really just following a largely pre-planned route to victory. Kill the Bad Guy doesn’t manage to create this sensation, nor does it offer a sandbox filled with tools for players to abuse.

Replay value is added through being score on each kill. Achieving the secondary objective, grabbing the tooth and passport, killing the target on the first day and being quick about it all contribute toward your total points. Going back and figuring out the quickest, most effective way to eliminate the target is fun, but again the lack of freedom takes away from some of the desire to replay levels. Oddly there’s no in-game leaderboard that you can quickly view upon completing a mission to compare scores, instead you need to use the Steam leaderboards.

However, you can upload videos videos of your kills to the Internet, thereby showing off how awesome you are, and the settings menu has an area for logging into Twitch, which is a nice addition.

The user interface also presents some small problems, largely because it seems to have been designed with mobile gaming and tablets in mind. Sabotaging items or activating them usually involves having to use a slider, which isn’t an irritation until you’re attempting to do things in a hurry, at which point manipulating a slider feels clumsy and pointless. Doing things in a rush is further hampered by the fact that to move the screen around you hold down the mouse click and drag. Again, this is fine in a calm situation, but when you find yourself needing to do something quickly it’s very, very possible to find yourself attempting to click on a small item and use it, but actually grabbing the map and slinging your view madly around the screen. To launch a stationary car  you must hold down the mouse button to charge it, and release when you think you’ve reached the right amount of power. The problem is judging this is terribly trial and error in nature. During one mission I needed to launch a car using a ramp and squish the bad guy. What followed was a frustrating number of restarts. I’d hold the button down and launch, only to see the car hit the ramp and stop. The next time I’d hold the button down for what felt like a mere split-second more, only for the car to fly over the bad guy’s head. Even dropping a crate from the top of a building can become annoying, as the slightest movement in the mouse sends it too far off course, while getting the timing right on this and other things involves some serious guesswork.

Indeed, the simple graphics, top-down view, user interface and bite-sized nature of the levels all go a long way to making the game feel like it was supposed to launch on mobile platforms rather than PC. In fact it probably would make a lot more sense on a handheld device. As something to pick up and play on the way to work or whatever, Kill the Bad Guy Would be outstanding.

As a fully fledged PC title, though, it’s mostly just an entertaining diversion, one that can be played for a quick twenty-minutes and then put aside for a while. Eliminating your targets rewards you with a lovely splash of blood and the glow of a job well done, but it’s a glow that tends to fade away quite quickly as you find yourself wishing for methods with which to dispatch foes and more freedom to do so.

The Verdict: 3/5 – Good
A solid title that provides half-a-dozen hours of fun, provided you don’t play through it all at once. A great game to pick up for five to fifteen minute blasts.