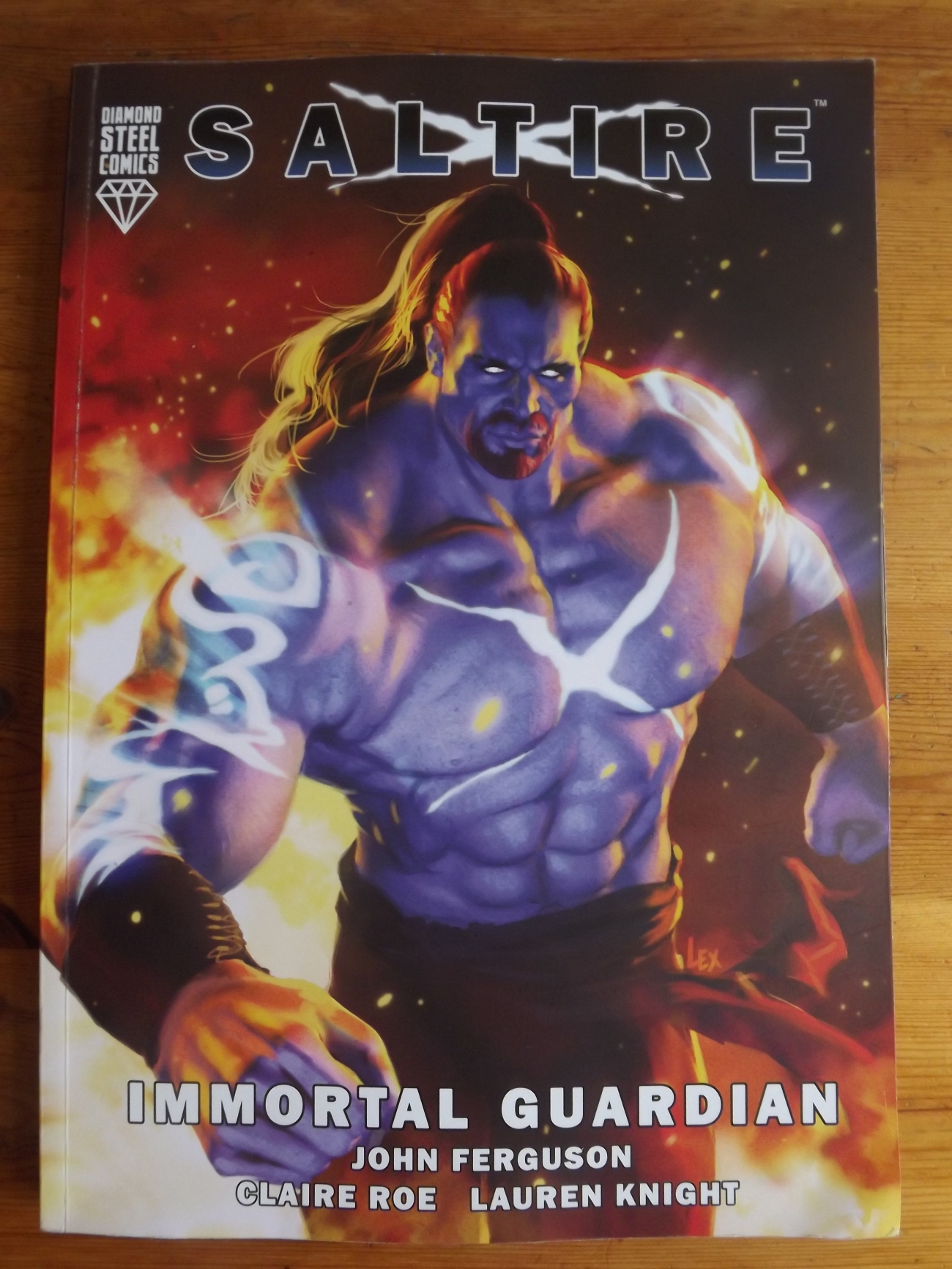 Following on from my adventures at Glasgow’s Comic-Con, which you can read here, I promised four comic-book/graphic novel reviews. Here’s the first of them.

As a nation Scotland is practically overflowing with rich history and myths. Its beautiful highlands have always held a deep appeal and sense of powerful mystery, the glistening land and eery fog that often hangs just above the ground only serving to enhance the mystique, as does the many castle that dot the landscape.  As a people we Scots seem to carry an inherent quality that other nations find compelling, too. Despite our lore and castles and kilts, though, and the fact that some terrific writers have come from within our borders, Scotland has never had a true superhero, except for a few comedic ones. But the team over at Diamondsteel Comics are aiming to correct this horrible injustice. Having already produced several issues of Saltire this graphic novel collects the existing two story arcs into one book titled Immortal Guardian. But is it any good?

The book opens with the Roman army marching toward the border of Scotland with the intention of conquering the land in the name of the Empire. The various clans come up with a plan to defend their homeland, summoning the ultimate embodiment of the nation; Saltire, a blue behemoth of a man with the saltire emblazoned upon his chest and a great mane and beard of ginger. The only thing missing from Saltire is a kilt, which is a somewhat baffling omission considering he is in all other ways the absolute representation of all things Scottish, second only to Terry Pratchett’s brilliant Nac Mac Feagle, who not only wear kilts but also yell “Crivens!” while brandishing broadswords. They remain the single greatest representation of the Scottish people ever seen in any medium. 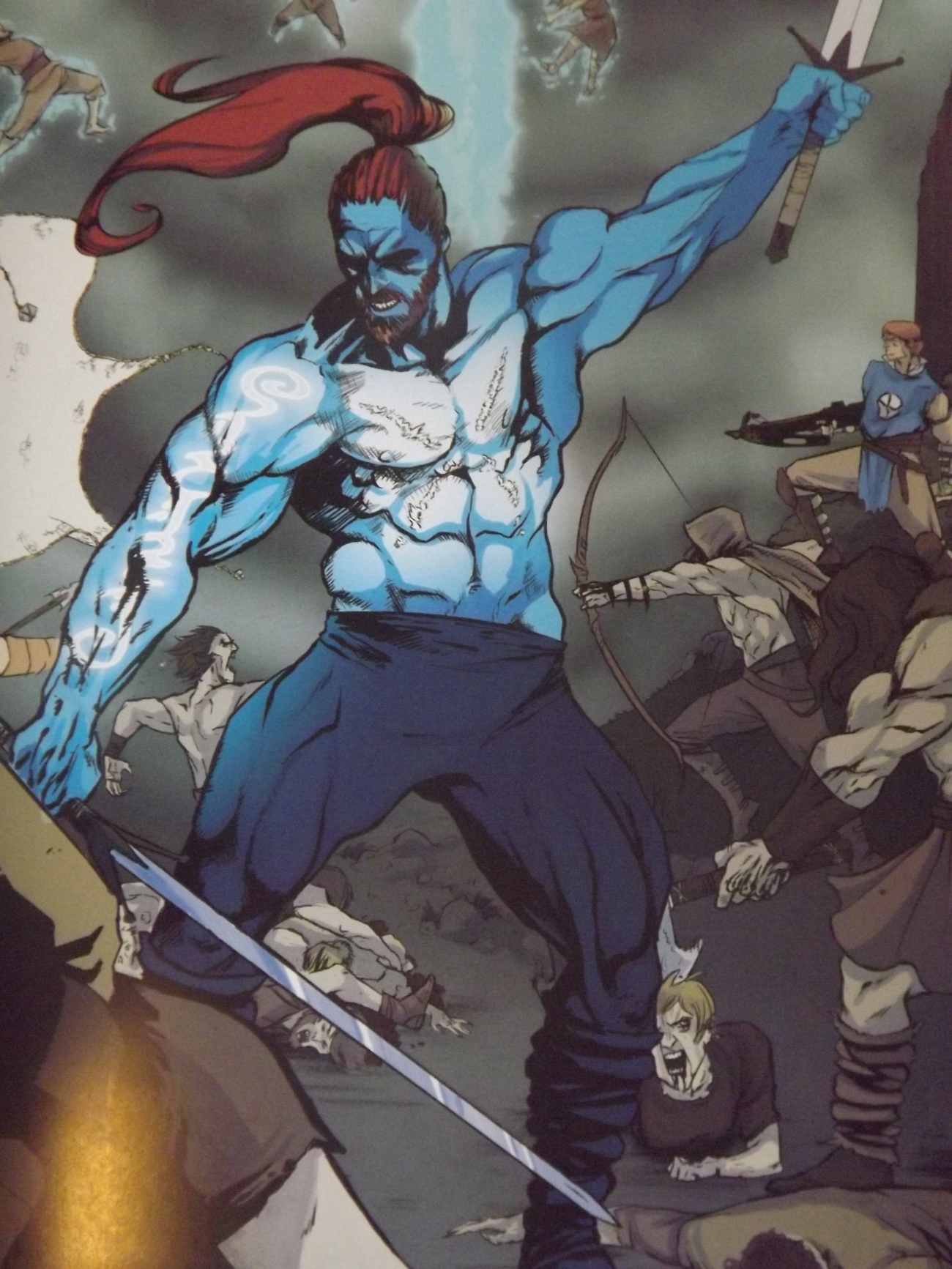 From there the book follows Saltire across many years and events. The fascinating thing here is that Saltire isn’t limited to just any age; he’s a spirit summoned forth for a reason and is immortal, thus he can continue to appear in key events across this fantasy Scotland’s history. It’ll be interesting to see where the character is taken in the future. Perhaps we’ll see the blue brute eventually walk the streets of Edinburgh in the modern day.

But for the new Saltire takes place firmly within Scotland’s past. It’s impressive to see how writer John Ferguson has sewn together hundreds upon hundreds of years of Scottish myth and folklore with more traditional super-hero elements and modern ideas, creating a fascinating ancient Scotland for Saltire to inhabit. Of course being Scottish myself I’m absolutely biased. It does come across as a sort of Game of Thrones style world, designed to be darker and grittier for a modern audience that appreciates that sort of tone. At the same time the action is bombastic, the tale being told is big and the artwork is pretty lively, so there’s a nice contrast going on that ensures the book never becomes too dark or depressing, something which Game of Thrones is absolutely atrocious for doing. Yes, I know, I love Game of Thrones, too, but you have to admit it can be a slog sometimes.

Saltire himself is primarily presented as a force of nature, a man with a simple but striking visual design that is capable of doing some serious damage with his dual diamondsteel swords. At this point, though, despite the relatively large size of this graphic novel, he’s also something of a blank slate. His rather vague origin story and subsequent battle with the forces of Rome in the opening arc demonstrate his sheer power, and the remaining two issues give him a chance to converse with other characters, but right now there’s nothing that defines him as a person. This makes sense in the opening issues given his status as a supernatural being that has been newly summoned forth, but the second storyline contained within Immortal Guardian leaps 500 years into the future and it appears that for the entire duration Saltire has been present in Scotland, so the fact that he’s still lacking anything resembling a personality is a little disappointing. However, it’s still very early days for the comic.  There’s plenty of time left to define Saltire as a character, and not just as a powerhouse.

The second storyline proves to be considerably stronger than the enjoyable but rough first issue, dealing with a Mercyan invasion and a powerful being called Ban Sith who creates an undead problem for Saltire and the Guardians of Scotland to tackle. Here writer John Feguson seems to get a better handle on pacing the story and lets us spend a little more time with the characters when they aren’t just smacking things around, although page-time with the Guardians when they aren’t in combat or just spouting clunky lines is tiny, making them seem more like a bunch of disposable goons than people we’re supposed to care about. The dialogue and writing are firmly entrenched in the realms of typical High Fantasy, and I have to say that as an avid reader of fantasy I honestly through I’d gotten away from that style of speech years ago.  The style of speech is weighty, formal and overwrought, and conversations between characters sometimes feel less like dialogue and more like people loudly proclaiming things while being in the proximity of others doing the same thing. 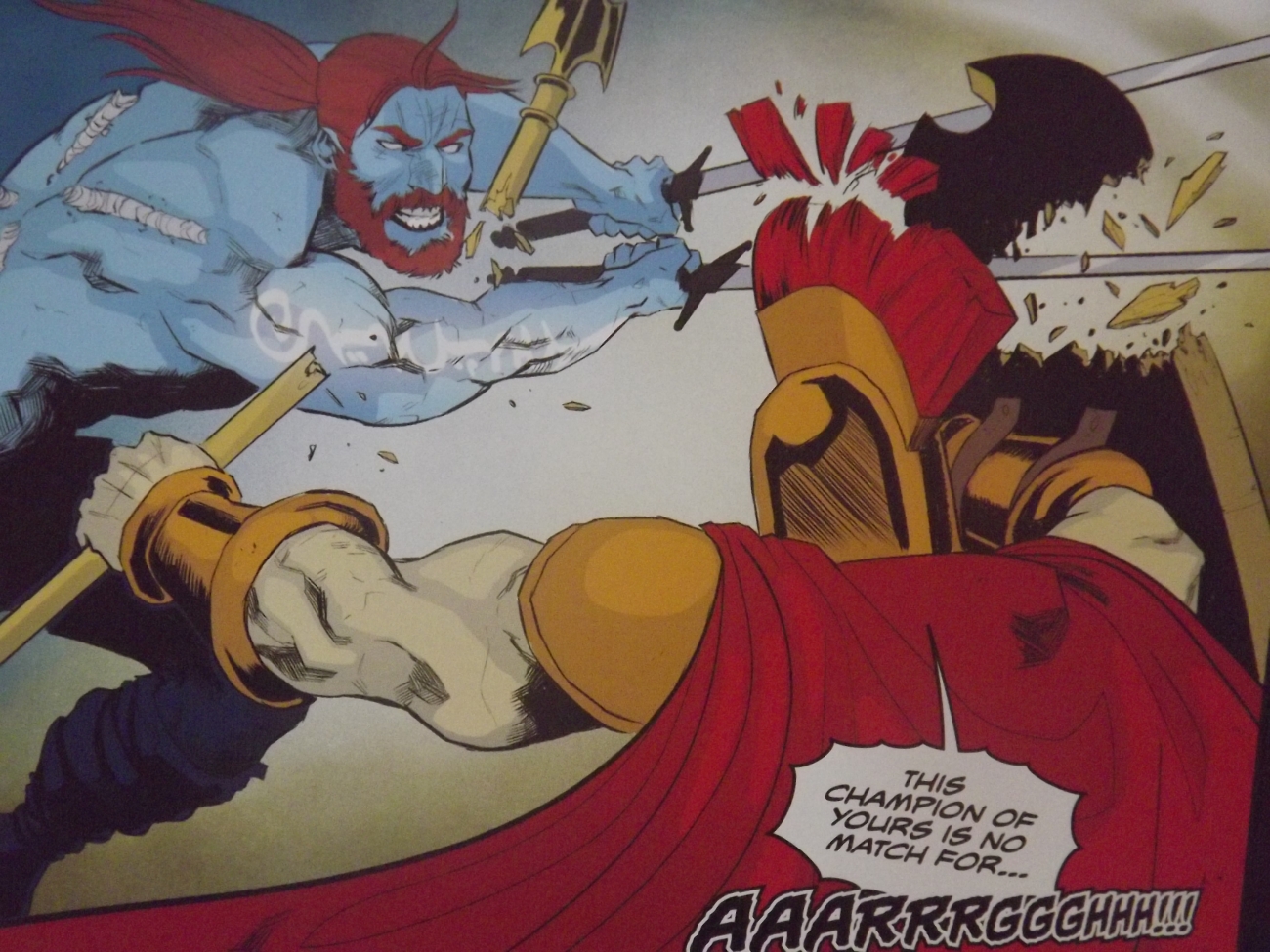 It is perhaps an unfair criticism. Given the period of history Ferguson has set his comic its understandable that he’s going for this style of speech, so it’s absolutely right to point out that a sense of distaste for the cliché High Fantasy style of speech is a very personal thing, one that I’ve gained over the years of reading fantasy books. It remains difficult for me to take any character seriously when they’re saying such things as, “Wretched hag! You will rue this betrayal.” or screaming, “Feel our power!” as they hit someone. I’m no history buff, either, and therefore have no way of knowing exactly what style of speech ancient Scotland truly had. I’m just more surprised that Ferguson didn’t go with what the world views as typical Scottish speech or inject more slang into his writing. At no point does anyone declare, “I dinna ken what’s goin’ on!”, which makes me a little sad. However, putting the style of speech aside my criticism of the dialogue between characters stands; conversations simply feel stiff and awkward most of the time, something which will hopefully be sorted out as the series continues.

But it;s important to say that Saltire: Immortal Guardian is just really fun to read. This edition collects together the existing three over-sized issues of Saltire, and the art is handled by Tone Julskjaer, Gary Welsh, Claire Roe and Lauren Knight who bring a rough, lively style to the book that makes me think of quick, fast sketches given color. The action comes thick and fast, with this book managing to jam in nothing less than a couple of Gods, two living armies, an undead army and supernatural siblings. It’s too packed, really. There’s a lot information thrown at the reader at times. There’s ten Guardians alone that are introduced in the first issue, plus a unicorn, a dragon, The Stone of Destiny, a couple of different realms and other information. The story jumps 500 years at one point and new Guardians have arrived, the concept being that the son takes over the father’s role as protector, keeping the same name in the process. What quickly becomes apparent is that the story is more concerned with the big picture than it is its characters; the story is EPIC with all capitals, with over-the-top action and huge threats all overshadowing the individual characters. Various Guardians get named, and then sort of glossed over in favor of dialogue which moves the plot forward but which rarely ever stops to establish character traits. Unsurprisingly this renders some dramatic moments less powerful than they ought to be.

On occasion it almost feels like scenes are missing or the page randomly skips to a panel and then back again. There are moments that feel disjointed, like there was supposed to be a panel or two more to provide a smoother transition. Just a few pages into the book Saltire encounters a strange, elderly man who states that Saltire is not welcome in his lands. Saltire winds up pelting him with a stone he’s carrying. This takes place over just one page, feels completely out of place and doesn’t seem to have any reason to exist. It doesn’t connect to story in any meaningful way. Saltire proclaims that the clans will fear him no more, but as a reader I’m left wondering why they feared him at all. Who was he? Why was he there? It seems his entire existence was because Saltire had been summoned three pages before and John Ferguson felt there needed to be some violence. A few pages later there’s a scene where Saltire asks, “may the guardians be bound from this day, in defiance of fear and tyranny?” Nobody replies. Nobody acknowledges the question, and in the very next panel Saltire is asking about the entrance to the Ethereal world. In another page further into the book  there’s a few panels of celebration, and the a single one of Saltire and a companion 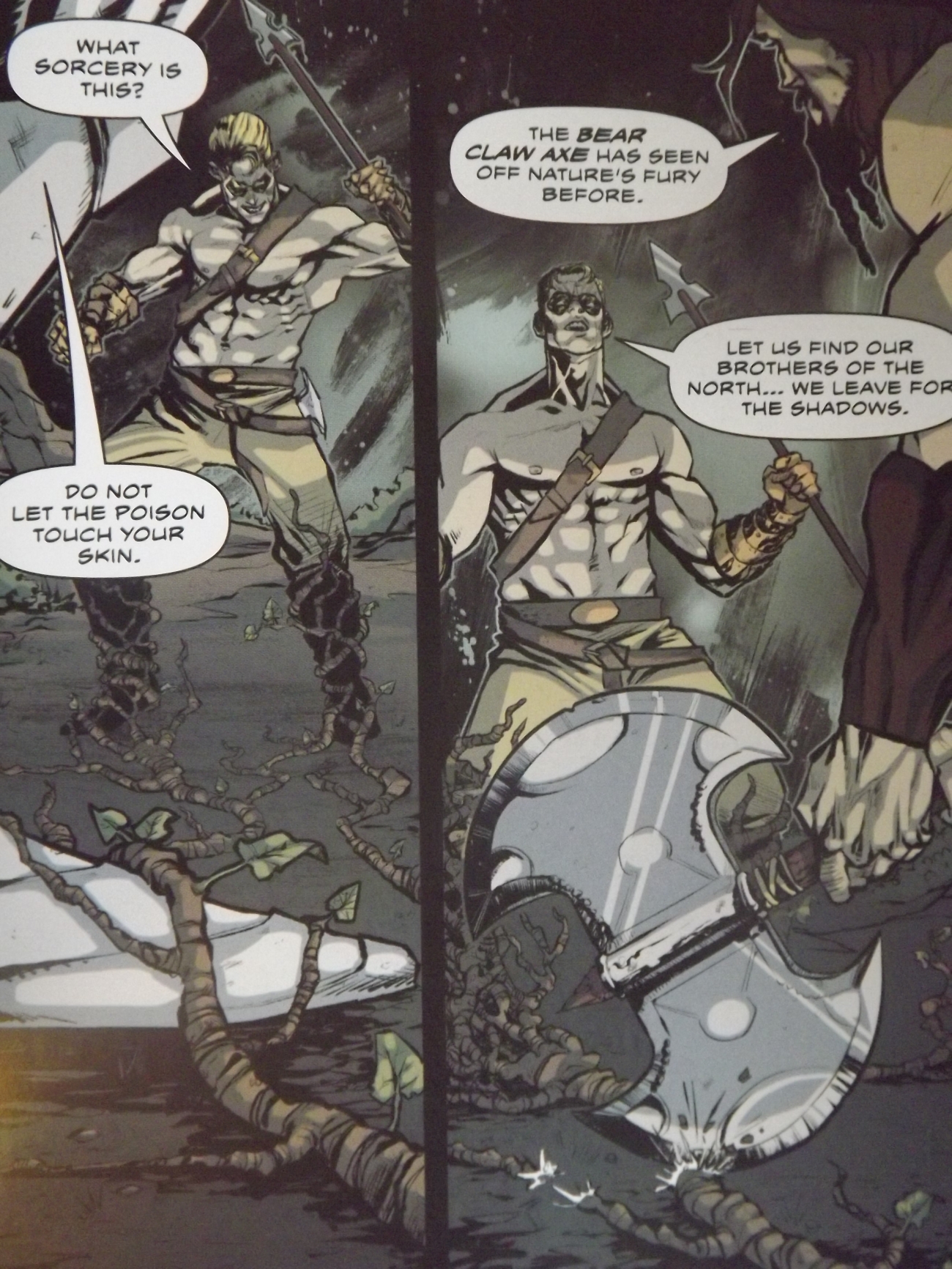 And as much as I do love the artwork it sometimes struggles to convey information properly. Take, for instance, an early example where Saltire is in full battle with a Roman champion; amidst the flat battlefield Saltire is kicked and suddenly finds himself on frozen-over water before the ice gives way and Saltire plunges into the depth. A cool moment, yes, but the thing is that the lake or pond or even puddle (it’s never clear) wasn’t show in any of the previous panels. It was suddenly just there for the sake of convenience. Another moment involves a character getting stabbed which is framed badly, which led me to backtrack quickly just to see why somebody was suddenly dying. There’s also quite a lot of panels that look unfinished or lacking in detail compared to the others.

But frankly I was enjoying it too care too much. I suppose as a Scotsman I’m coming into this review entirely biased toward wanting this to be a good book. I’ve always been proud of Scotland, and right now there’s a strong sense of patriotism within the country that makes it a perfect time for a Scottish superhero to enter the fray.

Saltire has some fairly big drawbacks that indicate the relative lack of experience behind its creation. The writing sometimes feels clumsy and the story can be a bit muddled. There’s a lack of characterization at the moment which means most of the sizable cast feel almost identical in terms of how they talk and behave, and the artwork is a bit inconsistent in terms of quality and its ability to convey information to the reader. Yet considering how early we are in Saltire’s run this is an impressive story set in a fascinating version of Scotland. Saltire has an impressive future ahead of it, I feel. At the moment it’s exciting and fun, filled with some cool action sequences and visuals, plus it has a fascinating lore, even if that lore is delivered clumsily at times. If it manages to develop interesting characters and more carefully work its magic and lore into the story then Saltire could become something truly impressive. This collection has a hefty price-tag, but I feel it’s worth reading.