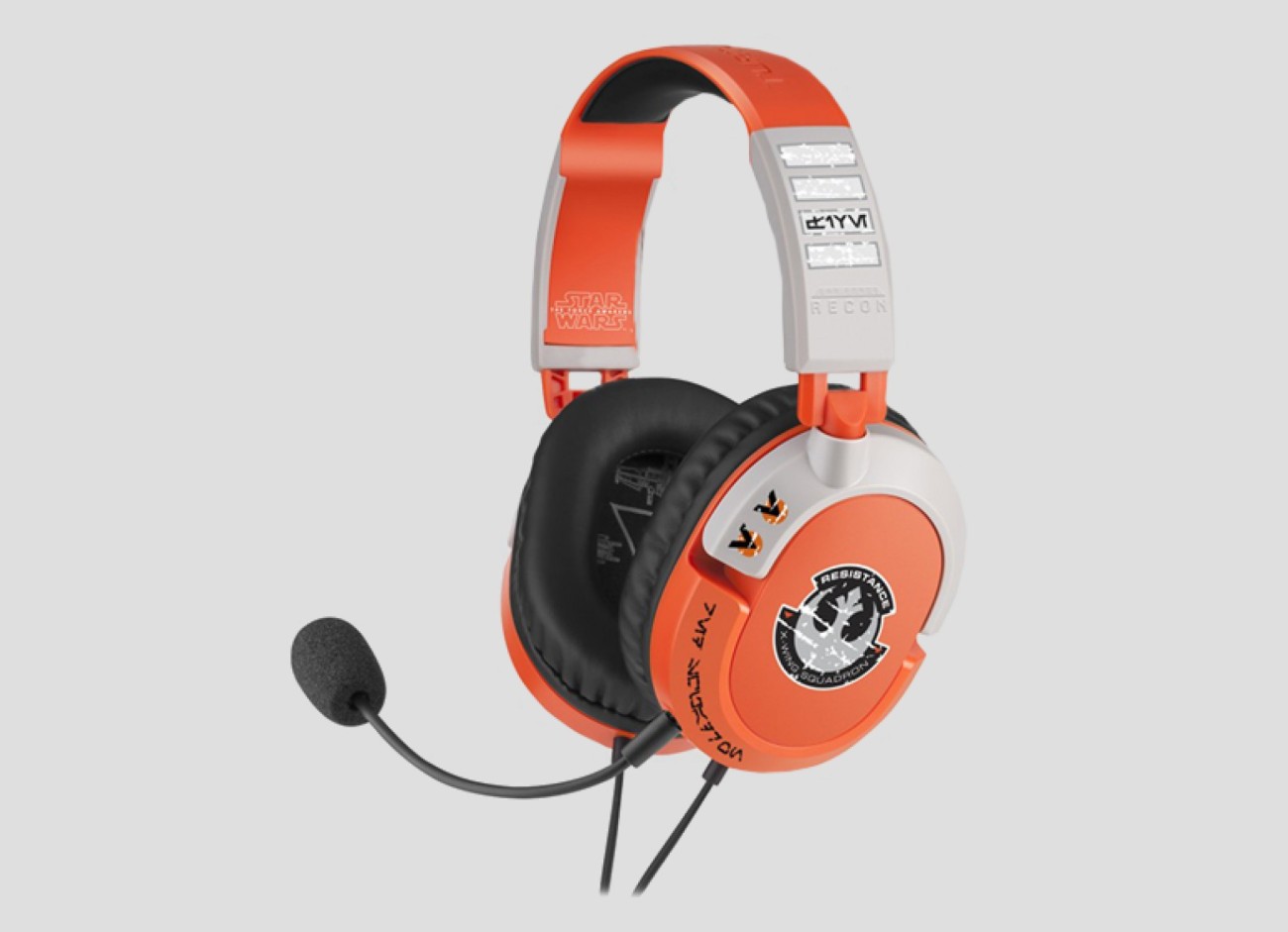 Not everyone can stuff seven speakers and a subwoofer into their bedroom or living room, at least not without the neighbours calling the police at 3am because you’ve been watching Halloween at full volume and they’re stating to get a bit worried about all the screaming, thus headsets can be a gamer’s best friend, especially for those late night sessions where the family is trying to sleep and you’re staring furiously at the name of the guy or girl who just shot you for the billionth time in Halo 5. Actually picking a headset, though, is tricky business since they span a vast price range from the enticingly cheap to the heart-stoppingly expensive. If you’re a Star Wars fan (if you aren’t out, get out of my presence) then you may have already been eyeballing Turtle Beach’s new X-Wing Pilot offering which seems to be a repainted version of their Recon.

The packaging is the first port of call, and it’s not great news. A cheap, thin outer cardboard box houses a flimsy cardboard mould for the headset, so protection during transit is almost non-existent. There’s a small leaflet in the box, plus the detachable mic and, of course, the headset itself, because if that wasn’t included we would have a serious problem. With a price-tag of just £35 the packaging isn’t exactly surprising, though.

Taking the headset out of the box the build quality is acceptable but hardly as impressive. At just 202g (including cable and mic)  this is a relatively light headset which is good for those long, hard Fallout 4 sessions, and while the solid plastic doesn’t feel or look like quality material  the whole thing seems to be reasonably solid, although it is prone to creaking. However, keep in mind that my test unit is a loan unit and may have been passed through a lot of different hands, so its hard to say if the creaking is normal, or simply because of being shipped and handed so much. The few millimetres of padding that runs along the very top of the headband is pretty paltry, almost like it’s a grudging concession to comfort that the designer was adamant didn’t really need to even be included. The light padding on the ear cups is better, although hardly luxurious, and provides almost no noise cancellation. I do appreciate the fact there’s small diagrams of X-Wings inside the earcups, though.  The size of the earcups does seem a little small, and indeed the headset in general is a little pinchy even when fully extended, so that could potentially be a problem for those people with larger heads and larger ears. Or Dumbo. Ultimately the headset is comfy enough for extended play sessions provided you angle the headband a little to stop the plastic digging in, but it’s far from the most comfortable headset you can buy. A little more padding would have gone a long way. 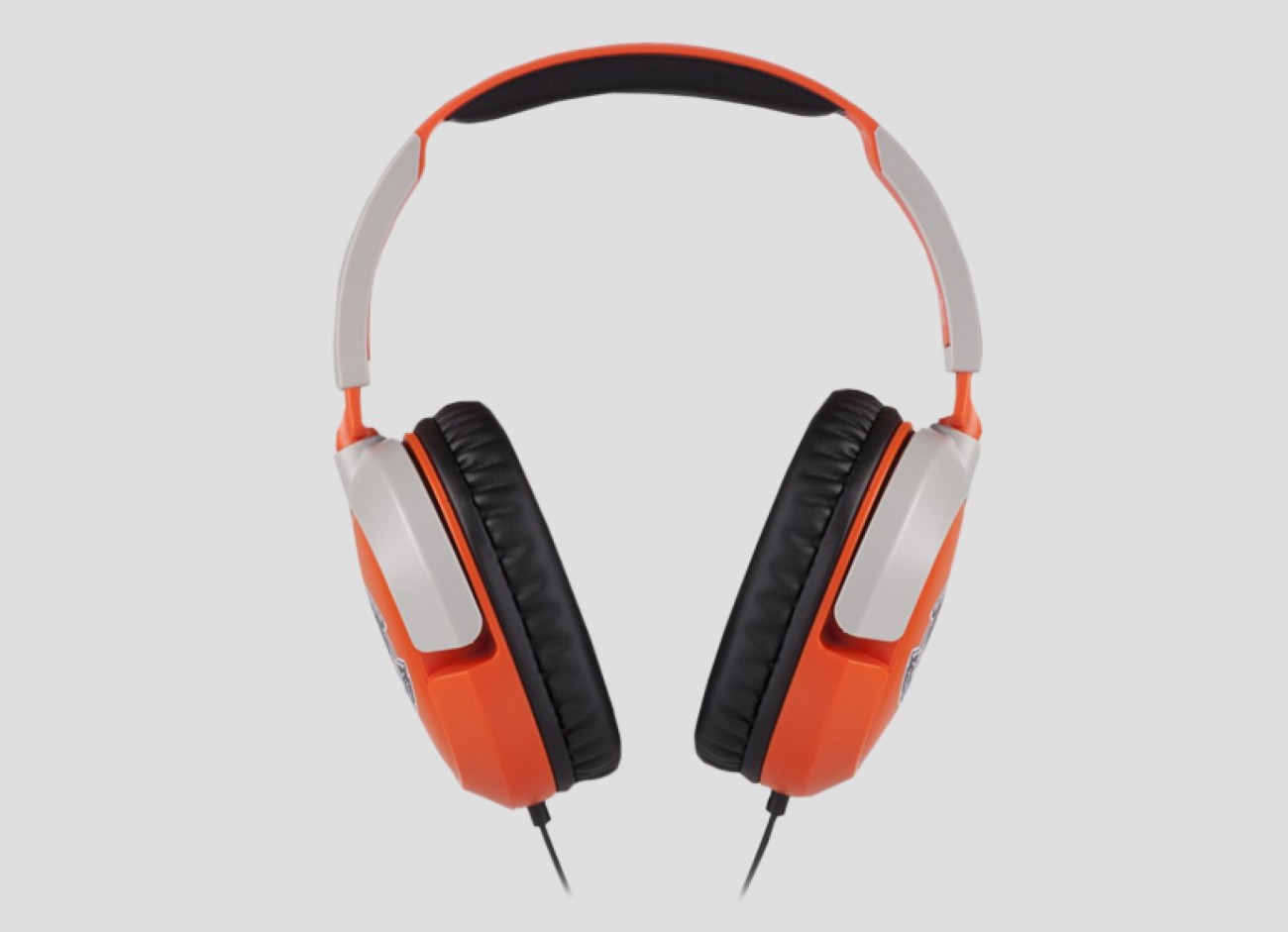 Moving on the headset has two wires that extend from earcup rather than the single wire that a lot of the competition tend to use, which isn’t exactly an important detail, yet remains worth mentioning anyway. About half-way down the wire there’s a small controller that let’s you mute the detachable mic and adjust the volume. Speaking of which even maxed out these headphones can’t go particularly loud, so if pure volume is your thing either consider a different headset or plan on running them through an amp. At the end of the wire is a standard 3.5mm stereo jack that can be plugged directly into newer Xbox One controllers or connected using either an official Xbox One adapter, or the Turtle Beach model. You can, of course, also hook the headset directly up to a TV or a PS4, or your PC, although you’ll need an appropriate splitter in order to use the mic.  Basically anything with a 3.5mm jack will work. At a mere 3ft long the, though, the wire is a little short. It’s perfectly fine if you’re connecting directly to a controller or have the PC sitting next to you, but otherwise an extension is going to be needed. In my case my PC actually sits several feet away from me, so rather than plugging the headset straight into the Soundblaster card I hooked it up to the Corsair SP120’s speaker systems headphone port located on the control unit. Likewise I couldn’t plug the headset directly into my TV or even my TV’s Creative speakers without an extension cord. I can’t be overly hard on Turtle Beach for this, though, as they are heavily advertising this as being a headset for Xbox One owners where the short cord will mean they have less mess to deal with.

The mic features a fairly typical bendable design so that you can shape it to your preference and can be detached, which is great in case you want to use the headset for listening to some music in the dreaded outdoors or simply don’t fancy talking to other human beings. The quality of mic’s audio is reasonable, managing to bring my horrendous voice to the ears of my friends with an acceptable degree of clarity, much to their everlasting horror. However, it’s still quite far from being good.  The connection itself locks in nicely although a number of reviewers on Amazon seem to have missed that it doesn’t just push straight in – you need to line it up correctly, otherwise you’re probably going to end up breaking the entire headset while trying to shove the mic into place.

Visually the headset is…..well, not very nice. The orange and grey scheme is designed to replicate the outfit of X-Wing pilots, favoring the original trilogy since trailers indicate The Force Awaken’s suits feature a more toned down shade of orange, namely one that doesn’t melt your eyeballs. The whole thing just looks flat and lifeless, though. The text and designs on the outside of the earcups, which are actually painted on rather than simply being decals, feature scratches to try to make it look more authentic, but the effect looks quite poor and the rest of the headset is flawless, somewhat ruining the idea of a scuffed, war-torn headset that has seen many a battle in space. It looks more like a cheap, quickly put together cosplay item than anything else. I’m a pretty big Star Wars buff, but these just aren’t doing it for me, I’m afraid.

So let’s move on to the all important audio quality, which is….okay. Testing ran the typical gamut of movies, games and music, featuring the likes of Halo 5, Darksiders II, Avengers: Age of Ultron, Mad Max: Fury Road, Pink Floyd, Black Sabbath and some HD audio tracks as well since they can really highlight any problems or strengths within the headset. The earcups house 40mm Neodymium speakers driving the stereo sound to your ears with mild directional audio being provided via the simple method of slightly increasing the volume in one side.  The mids suffer heavily from the audio becoming muddled and loses much of the detail when things become hectic, damaging the beautiful sound design in something like Star Wars: Battlefront. Meanwhile the entire range has that slightly flat, lifeless, hollow quality that I’ve come to associate with budget to mid-range headsets, lacking the richness of better headsets. That’s two fairly big negatives, but the rest of the sound is pretty solid, capturing both the lows and highs quite well, if lacking much punch or wow factor. Naturally the level of detail that can be heard using a more expensive set of cans is far out of reach of this budget headset, yet it’s still capable of picking up a reasonable amount of the smaller sounds going on within any given scene, track or game. And that sums up the entire headset in terms of its audio; it’s okay. It’s fine. It’s decent. It’s reasonable. It’s absolutely unspectacular in just about every way imaginable, and it’s ultimately because of this I can’t recommend, nor condemn them. I can’t offer glowing praise or harsh criticism. They’re good. If I was still issuing scores they’d be a 3 out of 5, a 6 out of 10.

So now we come to the closing words of my review, and an explanation of the Recommended sticker. As you all know already this sticker exists to represent a game that is either great, or boasts one or two fantastic things that are entirely worth experiencing despite some other flaws. In other words, a game with a brilliant story and characters but mediocre gameplay can still earn itself a Recommended sticker. The one thing the sticker, and my reviews, don’t take into account is price; I may talk about the cost of any given product in the review, but ultimately when it comes time to offer up a final opinion the price simply doesn’t matter. I’m talking about whether the product is good, not if its good for that price range.

I’ve used quite a few Turtle Beach headsets over the years, from the cheaper to the more expensive, and for the most part have come away feeling good about them. It’s a little disappointing to come away from this Turtle Beach X-Wing Pilot headset feeling entirely uninspired. They aren’t bad, but they aren’t good. They’re okay, and that’s the hardest thing to talk about when writing a review. It’s easy to talk about things you love or hate because both of those things sparks pure passion, and passion is good for getting the words flowing, but mediocrity is tricky, hence the shortness of this review. If you want a cheap, solid set of cans and aren’t overly concerned with getting great audio then these are just fine and sit at the high-end of the budget price-range. But personally I’d probably recommend setting aside some extra cash because even a relatively small increase in budget can get you much better audio and comfort. Seriously, you and your games and your movies are worth it.