Epic Roll Review – They See Me Rollin’, They Hatin’

Review copy provided free of charge by the publisher.

Epic Roll attempts to take the inherently epic idea of a wizard, warrior and elf battling through hordes of enemies and distill it into a very simple push your luck dice game that plays in about ten minutes rather than ten hours. In other words it’s decidedly not epic. But it does involve a lot of rolling, so at least it got that part right. And one should never underestimate the strangely compelling act of rolling dice. Its addictive, like eating Jelly Babies or yelling loudly at folk on the street.

The contents of the small box are unsurprisingly minimal. There’s a compact board that lets you keep track of everyone’s progress, a thin deck of treasure cards, nine dice and some rather nifty colored glass markers. The quality of these components is excellent, with some nice artwork adorning the board, although I did have some trouble getting it to lay flat. The treasure cards look a bit dull, but overall there’s very little to complain about here. The size of the box makes it perfect for tossing into a backpack, and as a bonus the lid can be used for rolling the dice.

The goal is to progress through a series of six regular fights, as indicated by the crossed swords on the board, and then defeat the Lich who acts as a boss monster of sorts. Supporting a fairly low three players it’s a race to be the first one to end the Lich’s life and claim victory. Simple as that. 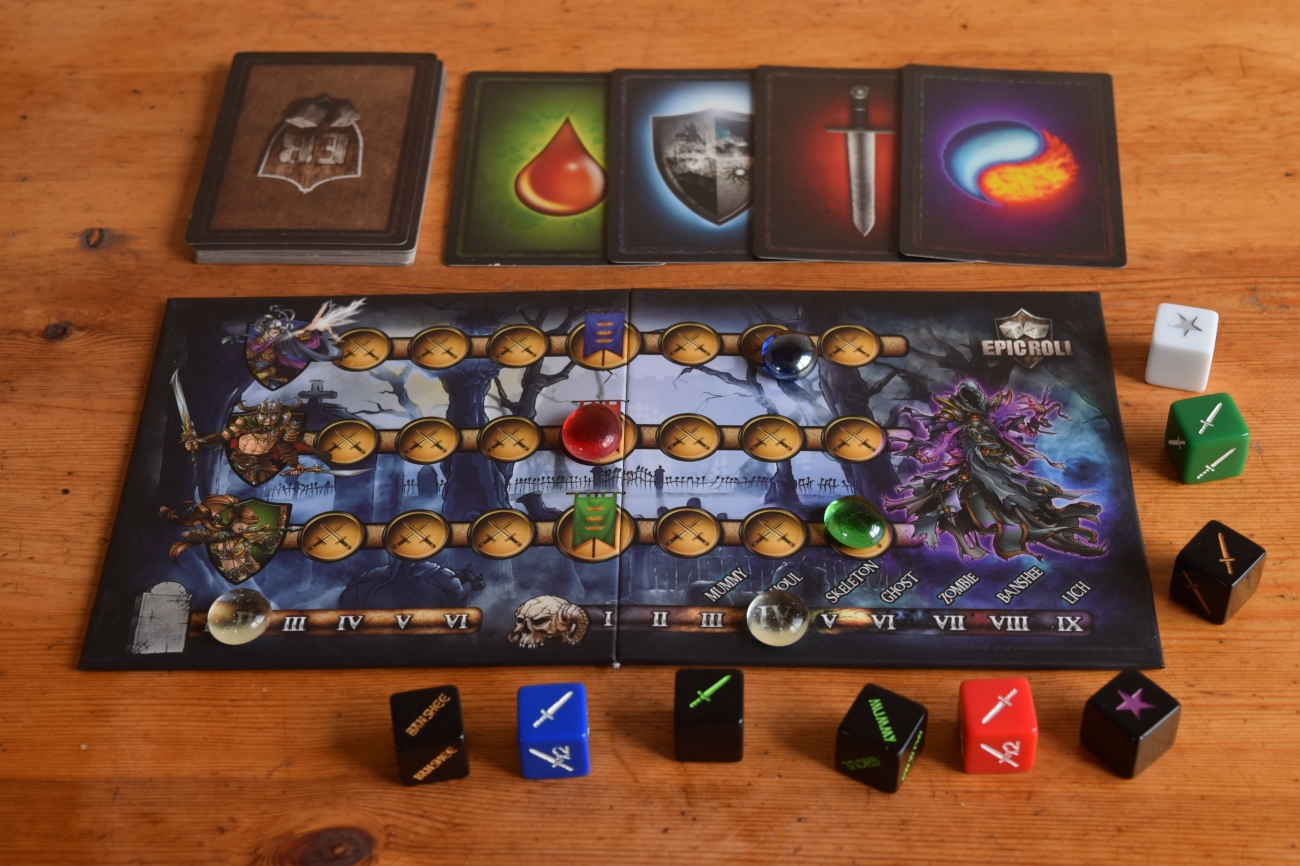 First you have to figure out what monster you’re battling by rolling a green and black die which will tell what nasty is trying to remove your face. Then you place the monster’s life marker on the appropiate space on right-most health bar, set the heroes health to six on his/her health bar and get on with the act of stabbing. Combat is a simple affair; you grab your hero die and the monster combat die and roll them together before working out the results. Shields negate incoming hits, and of course each hit deals one point of damage. You carry on rolling and adjusting health until either you or the monster dies, or you opt to retreat, at which point the monster gets one free roll of its dice for a final swipe at your rapidly retreating rear end. Should you fall in glorious, or not so glorious, combat then you get sent right back to the start of the progress track. However, should you emerge as the victor then you have a choice to make; either continue on to the next fight, or end your turn. The catch is that if you want to continue on to the next fight your health doesn’t reset, so any wounds you took in combat previously stay with you for the next battle, thus each round of combat is progressively more dangerous as you risk getting killed and having to restart.

It’s a simple system that be taught in about ten seconds, or possibly five seconds if everyone has been drinking plenty of coffee. It also provides a few tense moments as people get close to the final fight and deciding whether to continue or stop becomes harder to make. You might find yourself hovering on the edge of entering combat with the Lich but only have a few points of health left, while one space behind you an opponent has got a full health bar. Do you leap into the fray and risk it for the big win, or do you decide to end your turn, heal back up and hope that your opponent gets stomped on?

Winning a fight gives you a reward in the form of a random treasure card, which sounds a lot more exciting than it actually is. Rather than some nifty armor or a new sword or something like that there’s just four types of treasure card that can be used; one that gives you an extra hit in combat, one that let’s you block an incoming attack, another that restores a point of health and finally one that lets you counter a card played by an opponent, which in turn can be countered with a counter which could also be countered with a counter and….you get the idea. You can only ever have two of these cards in your hand at any given time, though. They add a little variety to the game but are ultimately quite plain. More importantly is that the developers missed an opportunity to bring something more to the core decision the game is built around. When you should play these cards is so obvious that there’s no thought involved.

After three battles a hero levels up, whereupon the game changes slightly. For starters the monsters you’re battling become tougher, able to absorb more damage before falling  to your sword/bow./magic. Instead of rolling the green die for determining which enemy you’ll be facing you have to roll the gold and black die which has the ghost, zombie and banshee enemy types. The enemy combat dice also gets replaced with its more dangerous counterpart that includes double hits. A new die for the heroes also tossed into the mix that has two stars on its six sides. Roll a star and that character’s special power activates; healing for the warrior; an extra hit for the elf, and a shield for the wizard. The final foe, the Lich, also gets a special ability die that lets it heal a single point on ever successful role, so during the final bout you’ll be tossing four dice at a time. The tiny rulebook says this can make working out the results of a fight more challenging, but that’s hardly true – the outcome can be worked out at a glance with ease.

Levelling up also comes with another small benefit, namely that when you get your arse handed to you by an irate banshee you’ll only have to drop back down to the half-way point rather than the beginning of the entire board. Hurrah!

Pick up the dice and you will notice that there are differences between the three playable characters. The wizard is the hardest hitter in the game with three sides of his die bearing double hits, but the other three are blank so there’s just as much chance of missing as there is decimating the enemy. On the other extreme is the elf, who boasts the only die in the game with no blank sides, having three single hits and three shields. Sitting in the middle is the warrior, with a. This does serve to bring a smidgen of extra spice to an otherwise very straightforward set of mechanics.

Yet the game’s small attempts at introducing some semblance of theme all fall flat. This is fantasy at its most generic, from the boringly titled “warrior” to the fact that the various enemies mean nothing more than different amounts of hitpoints. The special powers could have been so much more interesting, as could the treasure cards. When you remove this thin veneer of fantasy there’s very little that sets Epic Roll apart. While other push your lick dice games try to bring interesting twists to the genre, Epic Roll takes a lazy swipe at it and fails. Hell, it even gets its three characters wrong as you’ve got two “classes” in the warrior and the wizard, and then an Elf, which isn’t a class. Dear developers, I think you meant it to be a rogue.

And that’s pretty much all there is. It’s a straightforward push your luck dice game that asks you to make one decision over and over. There’s a small attempt at mixing in some theme with the whole warrior, wizard, elf and levelling up ideas, but obviously it’s little more than skin deep. I’d like to have seen support for at least one more player, too. Ultimately, then, Epic Roll is perfectly enjoyable in a very basic way but also entirely standard stuff.