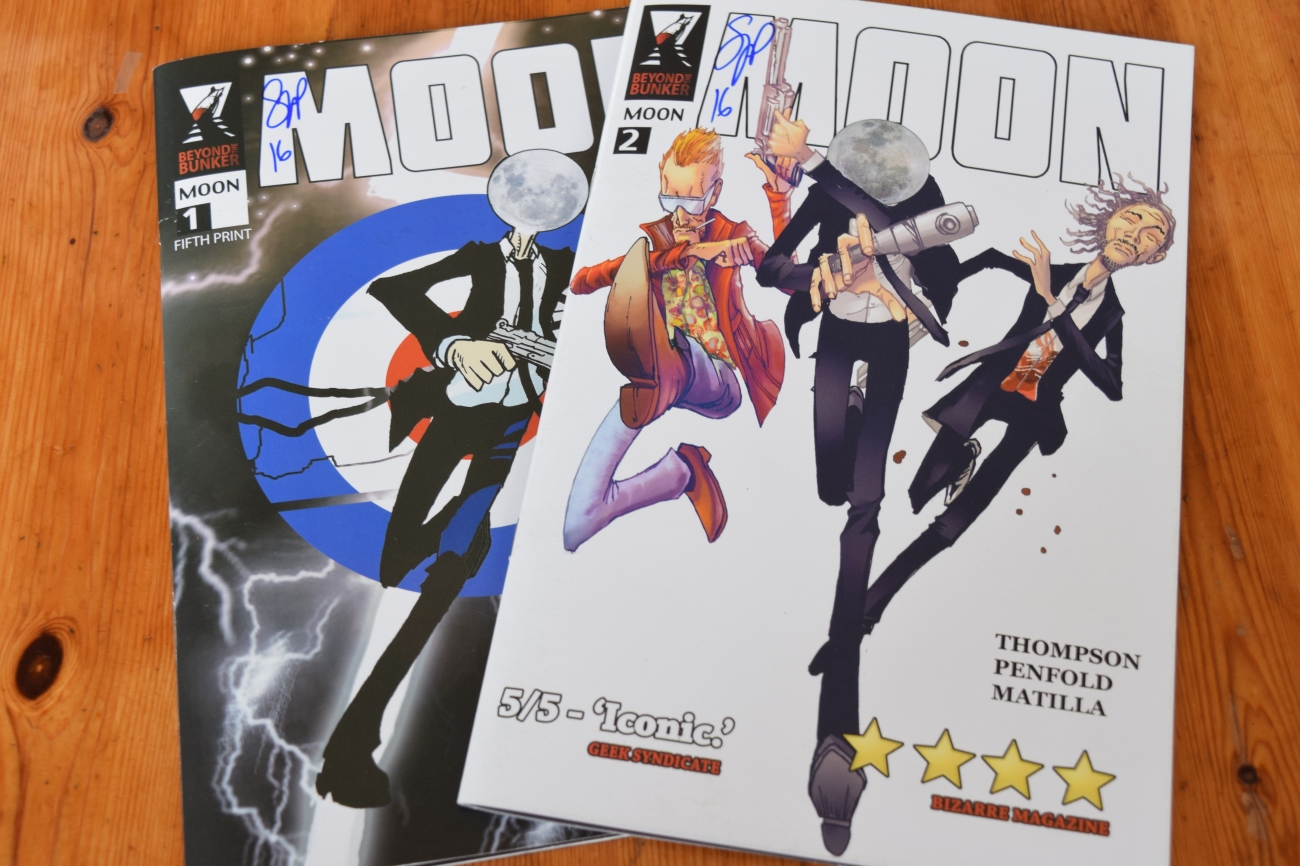 Having returned from Aberdeen’s second Granite City Comic-Con with a bag full of comics and a headache the size of Scotland it’s fair to say that my promised reviews haven’t exactly come thick and fast. Indeed, I have to admit that my general work rate has become a lot slower of late as I try to juggle having a dog to look after, real-life demands and making sure I’m getting out of the house enough for my Cystic Fibrosis. Don’t worry, I’m working on getting the balance better and speeding the reviews up. Here we are, though, with the first of the comic reviews and it’s a good ‘un.

The basic premise is what’s going to decide if Moon is for you or not; many thousands of years ago several Celtic druids gathered to conduct an ancient ritual in order to summon the spirit of the Moon to Earth and bind it to human form via sacrificing their beloved Queen, who had volunteered for the task. After a lot of arguing, bickering and several screw-ups which resulted in the wrong type of heart being procured they sort of succeeded, somehow drawing the Moon from its perch high in the sky and giving it human form, albeit a human form with a moon for a head and an inability to speak. Skip forward a whole lot of years and now when Moon is finishing Mooning up in the sky he descends to Earth and helps solve murders with his partner Ray. Confused? Good. Because it’s stupid.

And boy does it know that. Writer Dan Thompson doesn’t waste any time taking the premise or story seriously and instead revels in the complete insanity of the idea while happily ignoring any pertinent questions that you might have, like doesn’t the Moon going missing have a pretty major impact on the workings of the Earth? Why does nobody really seem all that shocked that the Moon is ambling around and can somehow grow a small beard? Why the hell is the Moon solving murders? How does a celestial body with no mouth get drunk? How does laughing using gravity actually work? And seriously, what the  McFuck is going on? 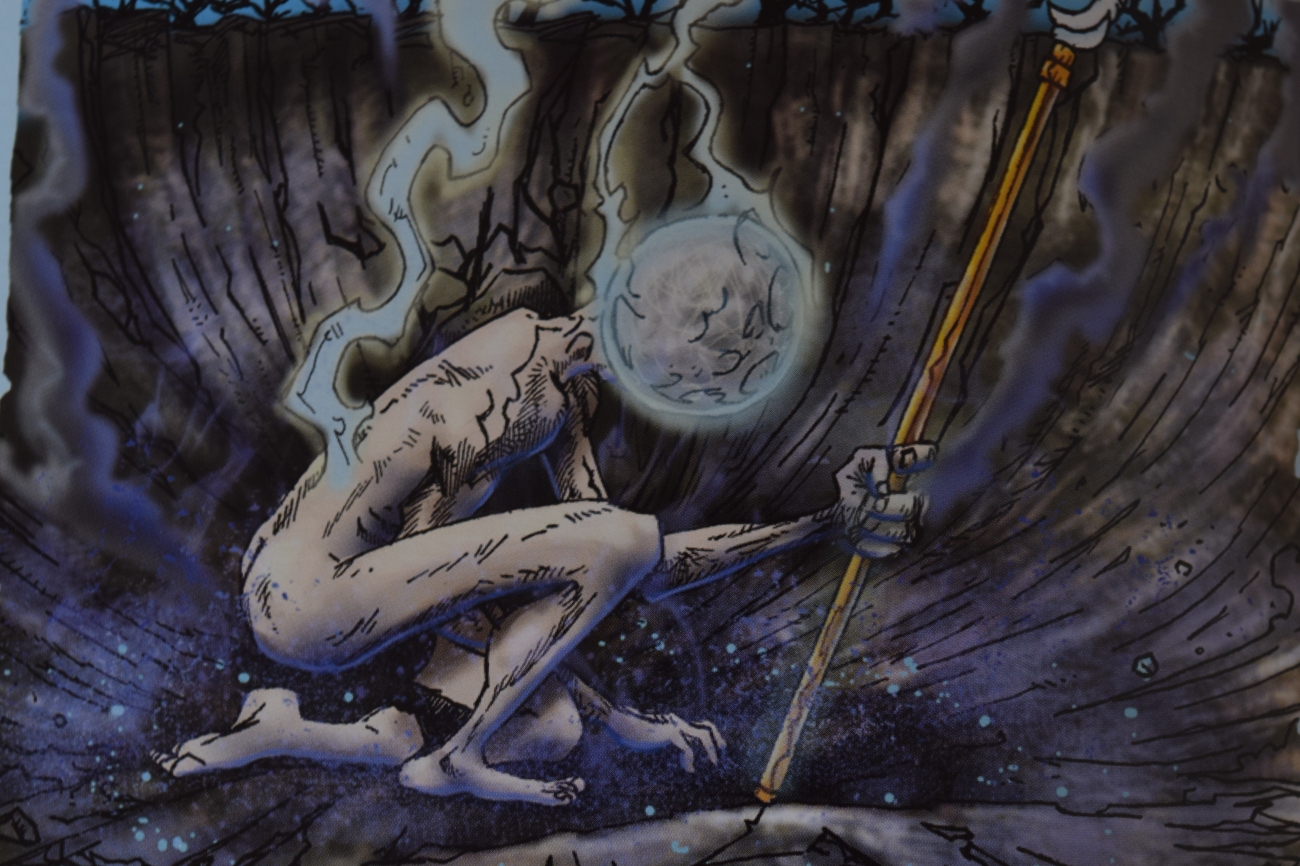 The artwork is rough and ready, almost looking like it was drawn by a person drinking waaaaay too much caffeine. With the penciling done by Steve Penfold and coloring by Ivanna Matilla their scruffy style gives the book a powerful sense of energy. Even the dividing lines between panels aren’t perfectly straight, and images sometimes overlap other panels, all adding to the aesthetic. However, the first issue is too busy for its own good. There’s a lot going on in every page with the artist sometimes even tossing in micro-panels and other nonsense, creating a cacophony of visual imagery that makes it difficult to process what’s going on at times or to properly appreciate the unique style of Steven Penfold. This is most prominent in the final few pages which are home to an action sequence that winds up being the comic version of an annoying modern action movie that reckons doing a jump cut every 0.2milliseconds is a good thing. Thankfully by the second issue the artist seemed to realise this and calms down a touch, delivering a more manageable amount of panels per page and thus giving the art and the story the room it requires to breath properly, even if he does still wander into the lands of confusion every now and then. More importantly the art imbues a mute character with personality. Since Moon can’t speed other people have to have conversations around him and at him, so the artist works hard on Moon’s poses to give him a way to communicate. It’s surprisingly effective.

Now we enter spoiler territory as I’m going to tackle the storyline running through both the first issues in order to give you a better idea of how Moon plays out. Once past Moon’s initial summoning the first issue introduces us to the titular celestial body and his partner Ray as they investigate a murder. As it turns out they work for THE Agency ( a proper name is never given) who presumably deal with the odder things in the world, although details are thin on the ground. Ray and Moon enter the scene to find that the current team working there had arrested a nanny who was a potential suspect, only to discover she was made entirely out of Chorizo. As in the sausage. Yup.  As it turns out it was the baby in the nanny’s pram that looks like it might have committed the heinous crime, although of course there’s a little more behind it, namely that the baby turns out to be a small bear going by the name of Bun Bun Warmheart, who served six years for the theft of the Cutty Sark and who was brought in by Ray. The first issue ends with Moon’s partner calmly chatting about a holiday he is about to take with his family before being killed by a mysterious group who presumably have something to do with Warmheart come barging in to the diner. . Meanwhile the second issue deals with Moon’s escape, funeral of his partner and his subsequent teaming up with a hot-headed, over-zealous parking attendant named Shades that Ray and Moon had an encounter with in the first issue.

Aside from the whole thing about a tiny bear called Bun Bun being a killer, it’s probably the dialogue in the second issue that best encapsulates the worst and greatest of Moon. As Moon’s boss assigns Shades to an advisory role with the spherical one himself she says to Moon, “your partner was gunned down while expressing a desire to spend time with his family. Procedure dictates that you have to be partnered up with somebody wildly inappropriate in order to complete the investigation. You know the rules!” On the one hand it’s a nice jab at the old cliché found in classic movies and TV, and on the other it also demonstrates the book’s sense of humor which can occasionally feel like it’s maybe trying a little too hard to be random and quirky. It’s going to have to tiptoe that line gently or else risk each character losing their unique personality, becoming one sort of quirky blob. 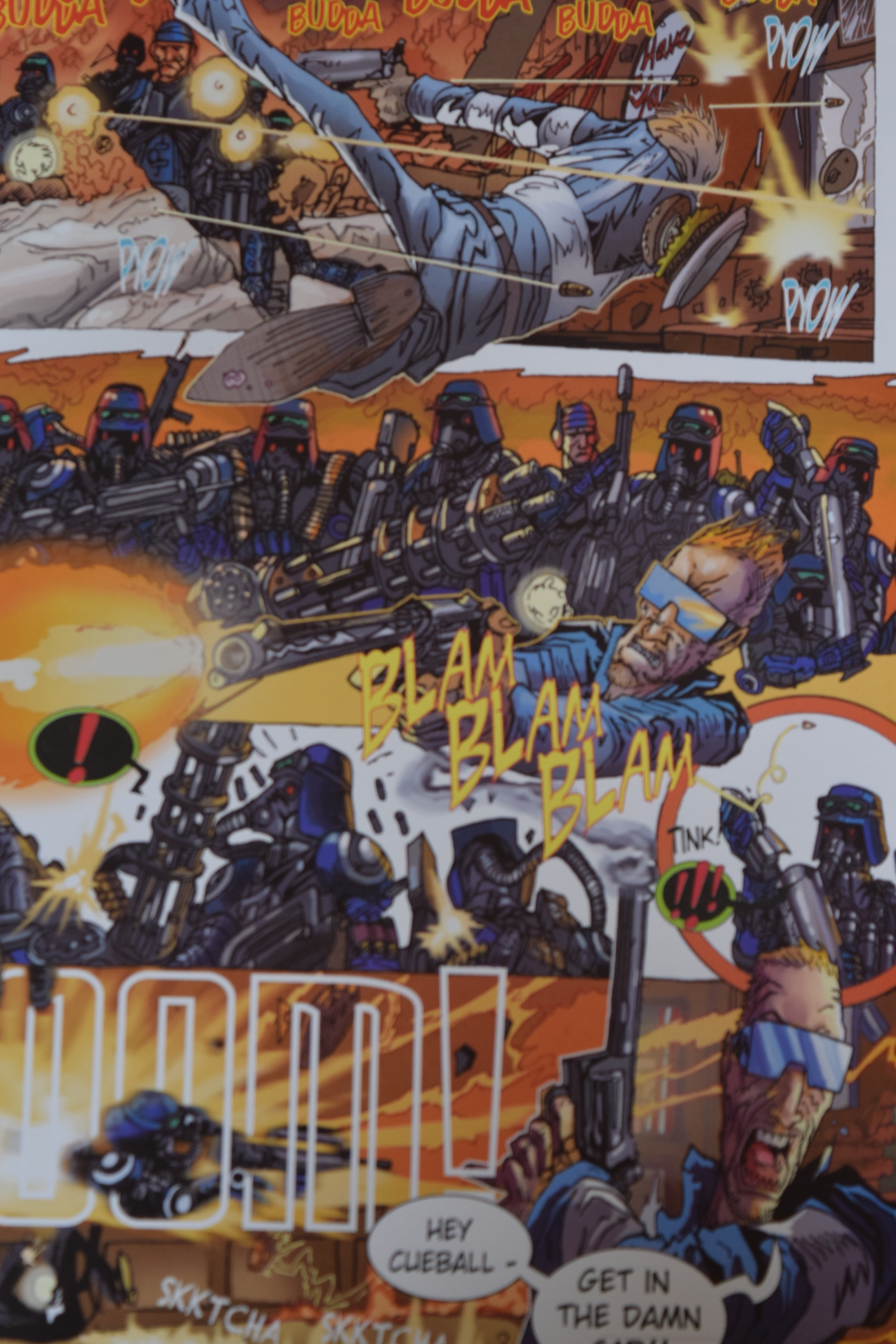 Indeed, going forward it does feel like Moon has a lot to try to get right. It has to juggle an insane plot with its unique humor while trying to ensure readers remain interested in a mute hero, one which they’ll have to work hard to maintain a sense of personality.

Overall I came away from the first two issues of Moon feeling impressed. The writing is sharp and witty through both books, only occasionally slipping up by trying to capture that “quirky and random” style of humor that has become more prevelent. The art and coloring are absolutely stunning, too. All of this combines to tell one of the most creative and compelling comics I’ve read in a while. It’s amazing that they manage to imbue a mute character with so much personality.  This is one I’d most certainly recommend picking up and reading.

But seriously, how did he grow a beard?