Review code provided free of charge by the developers.

Oh, Furi, why couldn’t you have launched last week? If you had arrived earlier you would have easily made it onto my list of favorite games from the first half of 2016. Furi’s brilliance, you see, lies within its deceptive simplicity; nine bosses stand in your way, and to beat them you can slash, dodge, parry and fire a gun. Beyond that, you can charge up your slashes to stun an opponent, dodges and gun. There’s no complex combos to learn, nor any upgrade system that allows access to flashier moves. New weapons are entirely absent,  too. Nine fights, four moves. That’s it.

It plays out like the very essence of the Dark Souls games compacted into a streamlined experienced with very little excess fat to be found anywhere. Every fight is about precise timing, good reflexes, fast decision making and an understanding of the enemy’s attack patterns. Every boss has their own selection of attacks and tricks that they bring to the battle that make them unique, and you have to exploit the small gaps in their arsenal. Furi never, ever feels unfair or cheap, despite the sheer amount of stuff that it typically tosses at you. You won’t die and feel like the game cheated you. Every defeat is a chance to learn from your mistakes, and Furi rewards that patience because when you get it right and you get into the magical flow it’s beautiful. 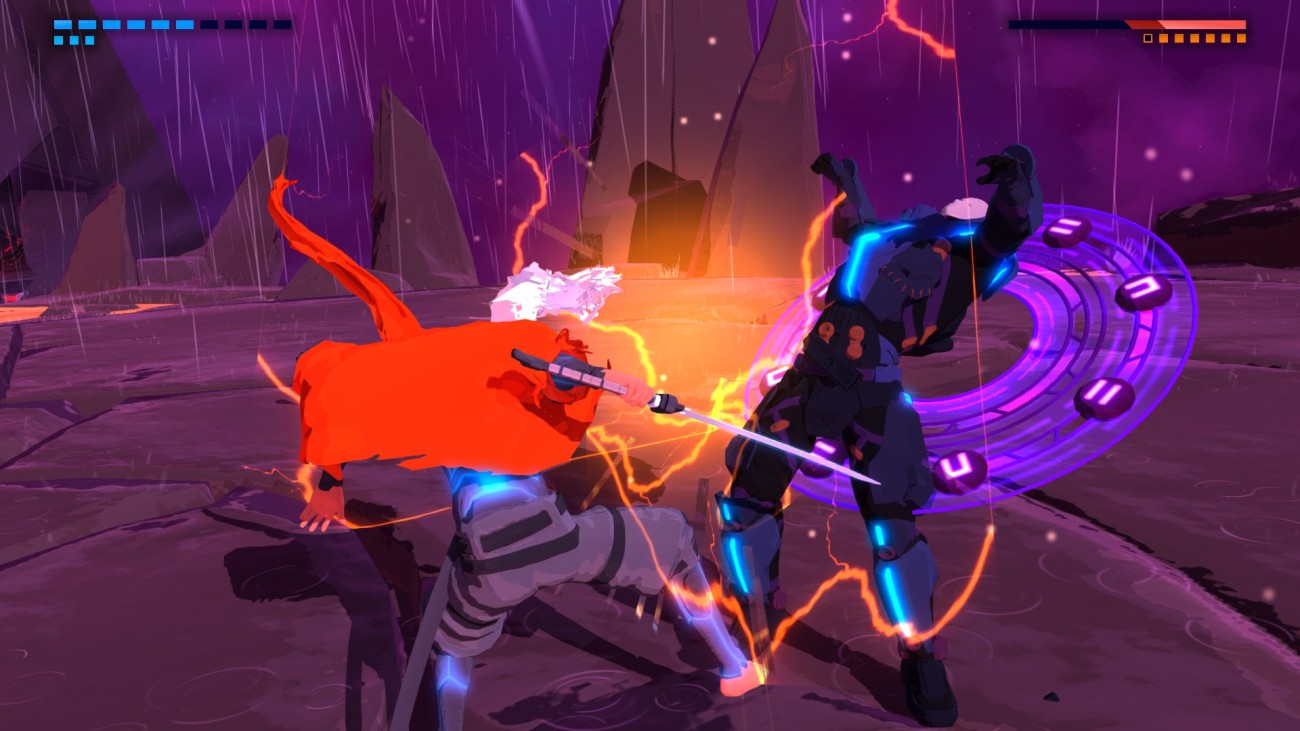 So here’s the setup; you take control of the mysterious Stranger who has been locked up in some sort of celestial prison guarded by a variety of weird and wacky people. Then yet another strange figure appears, one who looks like he decapitated the rabbit from Donnie Darko and began wearing its severed head as a helmet. This baffling man/thing guides you out of the prison, all the while rambling away about the place you find yourself, your past and those who guard the crazy lock-up you’ve found yourself in. Your avatar remains silent for the game, but through things mentioned by the rabbit-headed figure and the dialogue of the guardians his past slowly gets revealed, albeit in a vague fashion. It’s an odd mix of engaging and yet massively over-written in that a character’s speeches often feel like they’re supposed to be philosophical and deep, but aren’t. It’s clear the writers were going for a narrative that leaves the player with questions, and it does succeed, but not in the right way.

Still, the eclectic mixture of wardens that you face rise above the iffy writing. Designed by the very same artist who handled Afro Samurai’s design they’re all visually striking, rendered in the game’s nearly indescribable art style. They don’t go down in just a few strikes, either, each proving to be challenging in their own right.  Each one packs multiple stages, with two health bars per stage, meaning a battle can rage for quite a while, although they never outstay their welcome unless you’re really struggling. In contrast you have three lives, and each of those has a single health bar. The way this is handled is smart; if you lose a life then the boss will gloat a little and then restart from his or her current stage. If you manage to beat the snot out of the enemy and progress to their next stage you earn a life back, but if you lose all three of those precious lives then its game over, forcing you to start the battle from the very beginning. That’s not all, however, because while you can occasionally nab health pick-ups the biggest way of healing is to nail a perfect parry, encouraging you to stop hanging back with the gun and instead get your hands dirty with the sword. Parrying, though, requires very good timing. There’s a small ting and little flash of white light to indicate an incoming attack, but you actually have to wait just a split second after that to hit the button.

The first stage of every boss is an introduction of sorts, giving you a look at what sort of style they lean towards. While all bosses mix up ranged and melee attacks, most of them favor one or the other. Some really  rely on getting up close, while others prefer to unleash a hellstorm of projectiles that force you to dance around the map like a lunatic, dashing to and fro. Each stage gradually ramps up the threat, mixing in old patterns and moves with new ones. In this regard every boss is different, bringing unique attacks to the table. Old Man Time, for example, begins his first stage by putting up three rows of shields that orbit him, and that can only be destroyed using your gun. The catch is that the shields also deflect your projectiles, quickly turning the small arena into a deathtrap, forcing you to constantly move and dodge while maintaining the assault. Later on he’ll unleash more projectiles floating through the map, while teleporting in for quick attacks with his sword. The second boss is a strange one, a lady literally tied to a Segway of sorts. She can unleash arcing laser blasts and eventually even wields a massive scythe. The arena you battle her in is made up of numerous walls that can be used as cover, although they break down, something which can at times be used to your advantage. As you battle through the game you’ll learn which attacks can be dashed through, what tell-tale signs indicate a melee attack will be coming soon, the little moment when you can zoom in for a sword combination and when to back off and get some space.

There are some things that translate across all the bosses, though. The musical ting and small flash of light that indicates an incoming melee attack, certain types of projectile that can be shot down or not and the orange glow that indicates a boss is impervious to attack at the moment. The biggest thing that carries across all the fights is the close-combat sequences where guns and ranged weapons are put aside, bringing everything down to quick parries and area of effect attacks.

We’ve seen so many developers create massive  games with complex, interlinked mechanics that somehow still end up feeling soulless and shallow. The recent run of Ubisoft games are a prime example; layers of mechanics placed in open worlds that can interact in so many different ways, and yet somehow still end up feeling lifeless. Furi is the exact opposite, taking four simple moves and making them feel fun throughout the entirety of the game’s run time. The game just builds and builds through the nine fights, and while there are occasional difficulty spikes that get in the way it always presents new challenges that feel impossible to defeat, yet before long you find yourself rising to the challenging, and surpassing it. You go from parrying basic attacks to weaving through a field of projectiles to dealing with a laser grid and random energy pulses while still managing to fire a gun. You get better, and better, and better, and better, until eventually you’re surprised at how good you’ve gotten.

In some ways playing Furi was like travelling back in time. For many the Dark Souls series is their foray back in time to when games were challenging and demanding, but to me Furi more perfectly encapsulates this feeling. It’s a step back to time of simple mechanics, where it’s just you versus the game and nothing else getting in the way. Its mechanics are shallow, but in the best way possible. From that simplicity comes elegance, and through that elegance you can capture the mythical state that gamers and game designers refer to as flow; a zen-like state where you’re calm and collecting, seemingly anticipating things before they even happen. Furi is one of the few games that has managed to get me into that state consistently.

After anywhere between 6-8 hours, depending on your skill level, the credits will roll and you might breathe a sigh of relief. That’s just the beginning, though, because upon beating the game on the standard Furi difficulty you unlock  Furier, which doesn’t just ramp up the damage output and health of the bosses. Oh no, it bestows upon them all a vast new armory of moves to employ, too, giving you a reason to start the journey all over again and test your mettle. Frankly it’s here where an already beautifully designed game gets even better. Everything you learned previously across those nine battles still applies, but now there’s a whole new set of attacks to understand and counter. There’s also a speedrun mode in case you feel like proving your master of the game.

Interestingly Furi does attempt to cater to, and I’ll be blunt here, less skilled gamers, but feels as though it hates having to do it. Promenade difficulty gives you extra lives, plus the bosses themselves have less attacks in order to give you a better chance. Furi, though, makes it pretty clear through a few messages that it views Promenade players with disdain, which seems a bit stupid. If you’re going to include an easy mode, then do it properly. I assume the intention was actually just to push people to try to get better, but it comes off slightly wrong It’s a relatively small complaint in an otherwise impressive game, though. 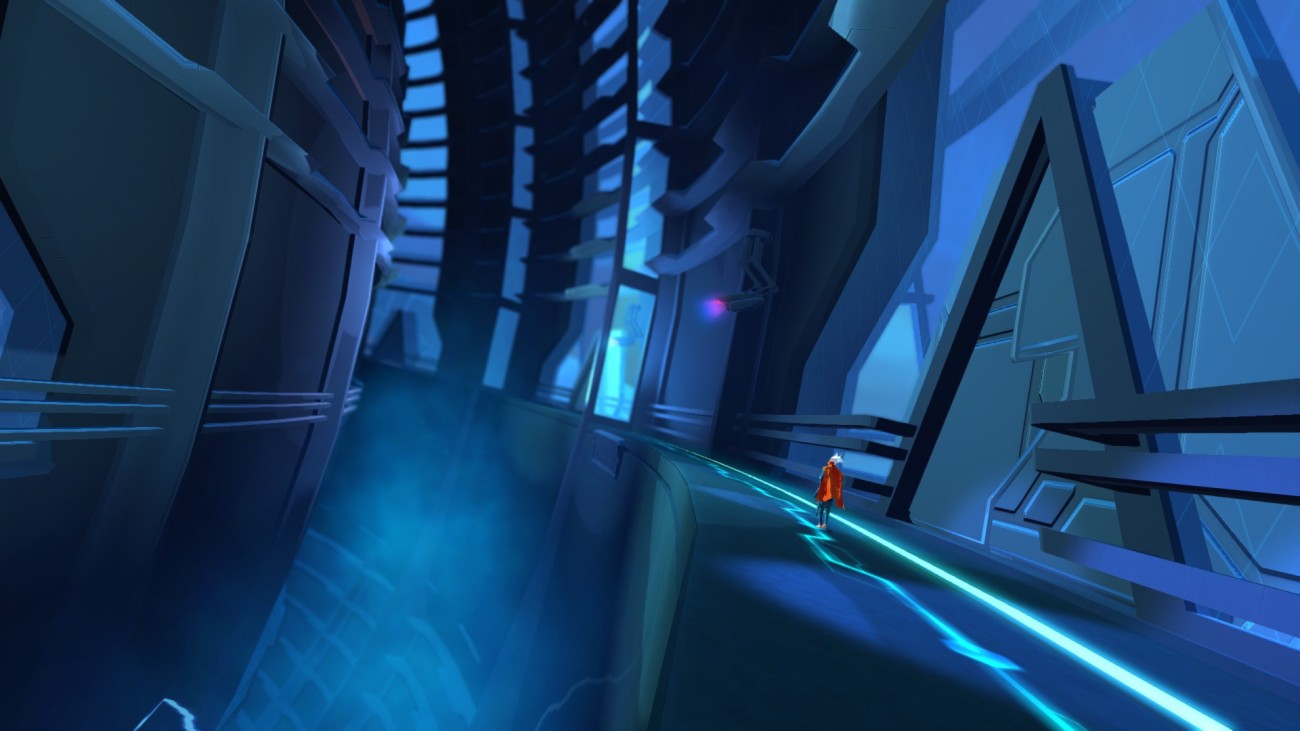 Special mention has to go to Furi’s excellent soundtrack which includes work from a slew of techno artists, including Carpenter Brut, Danger and The Toxic Avenger. It’s a truly memorable soundtrack that suits the game’s unique visual style perfectly. Speaking of which, it really is a lovely looking game, although I’m sure a lot of people will find the style off-putting. The only thing I’d like to see improved is the slightly clunk animations, and the blocky character models.

The only major flaw is the time you spend between fights, ambling from point A to point B while listenining to the rabbit-headed man ramble. These moments offer a nice respite from the hectic fights where you can get your breath back, but constantly changing, awkward camera angles prove to be a pain in the ass thanks to controls that don’t adjust with them, thus finding yourself suddenly walking backwards or straight into  a piece of scenery is annoyingly common. Not to mention there’s a lot of scenery that you can get caught on for some reason. It’s a shame because there are some nice vistas.

While the hefty price tag might be enough to put a lot of people off, Furi easily earns itself a recommendation from me. It’s not a tactical game nor a complex one, so naturally if you’re looking for either of those things then look elsewhere, but if you want something fast and furious that requires absolute concentration, on-the-ball reflexes and split-second decision-making that will challenge you every step of the way, then this is it. Oh, and it just so happens to be free for PSN users right now.