Livelock Review – Robots With Capes. That’s All You Need To Know 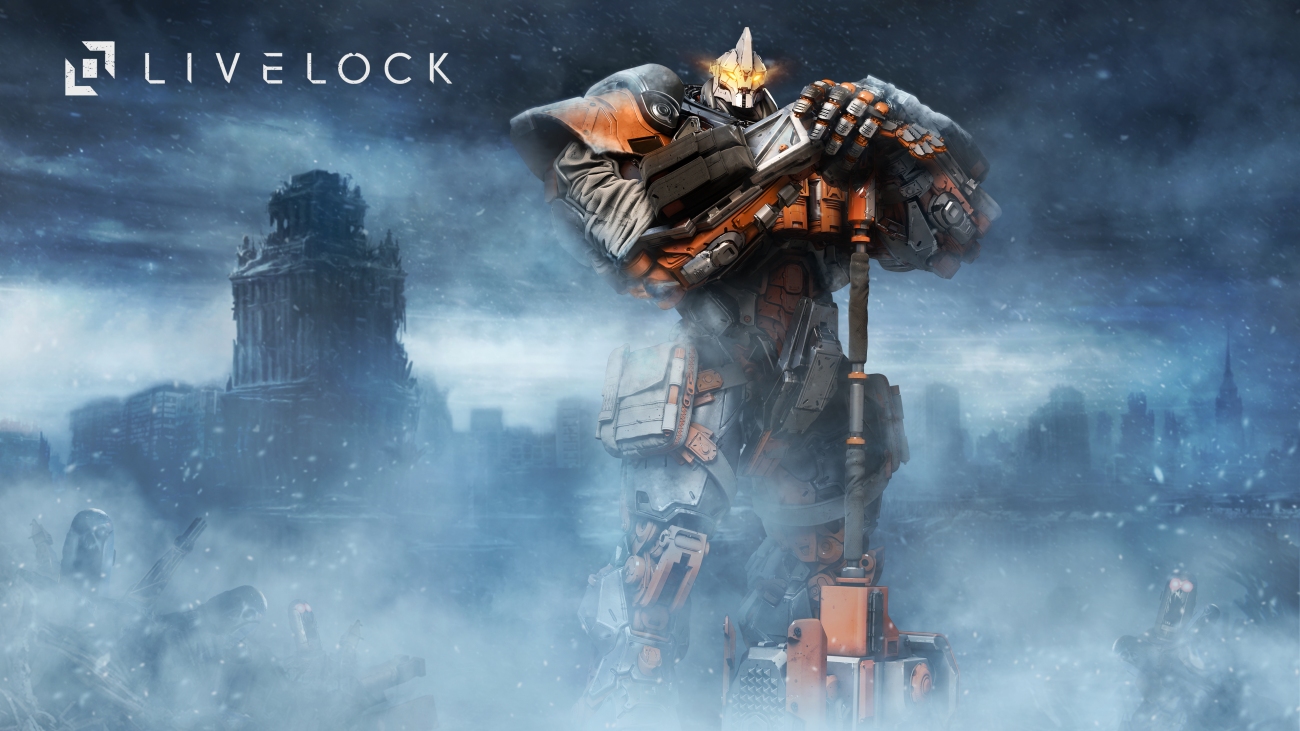 Review code supplied free of charge for review by the publisher.

Who doesn’t like big robots smashing stuff and shooting stuff? No one! And who doesn’t love a good twin-stick shooter/brawler? No one! At least, no one sensible or fun-loving.  So how could you not like a twin-stick shooter/brawler featuring giant robots smashing stuff while wearing capes? No one, figures Toque, which is why they’ve just released Livelock, which is exactly that. So let’s jump in and take a look, eh?

The boys and girls over at Toque Games clearly put a lot of effort into designing the world of Livelock, attempting to bring some unique flair to the typical postapocalyptic world. Learning of an impending wave of energy travelling through space that will strike Earth and eradicate life humans have ten years to develop some sort of plan to survive the cataclysm. What they decide upon is sending some of humanity underground to something named Eden where they will hopefully be safe, while other humans were to have their minds transferred into hulking machines designed to make it through the annihilation intact. The idea is that the ex-humans would work with an AI known as SATCOM to prepare the Earth for the return of humanity. Of course this is a videogame so things don’t go as planned and the machines engaged in a neverending war for dominance, forgetting their purpose in favor of trying to claim what little is left. If it all sounds a little Total Annihilation, you’d be right. 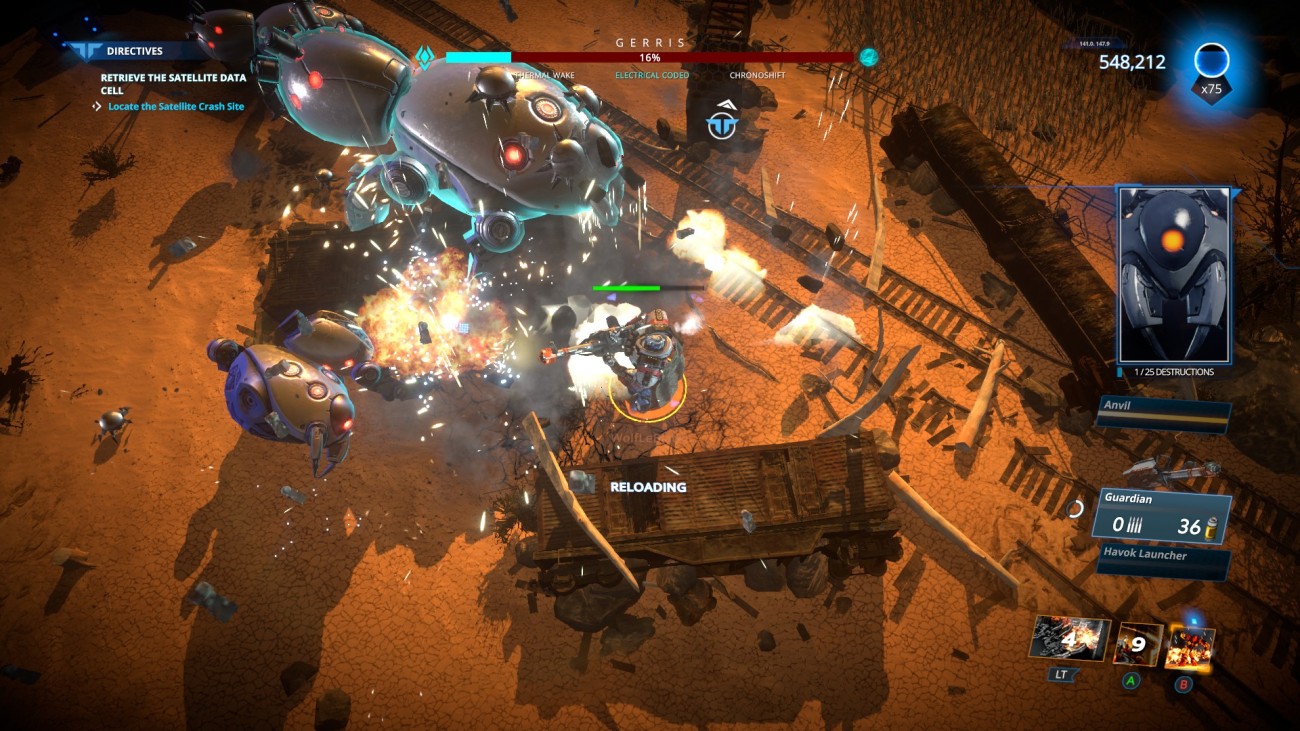 It’s a fun premise even if it doesn’t hold up to much scrutiny, but story is one area in which Livelock fails to deliver. A droning AI that tries to find new ways of saying, “go there and destroy X,” flat characters and stunted writing all make sure that you’re never engaged or invested in the narrative. The trio of robots you can play as are stuck delivering cringey one-liners, never getting a chance to shine. Likewise all the lore that ARC have developed gets pushed aside, almost like they were afraid to bring it to the fore in case it got in the way of the action. That’s perhaps understandable, but it’s such a shame to see it all go to waste.

On the gameplay side, however, Livelock is a whole lot of fun. This is a no-nonsense, no frills game that focuses on deliver polished mechanics rather than innovation. The core of everything revolves around the three avatars you can choose from. The hulking Vanguard has one very clearly purpose in life; wade into combat and begin decimating the opposition while soaking up damage. He’s the front-line bruiser of the group, wielding things like a large hammer that can strike multiple enemies at once and the slow-firing but powerful reaper cannon, although I typically favored his shotgun-style gun since I was up close and personal anyway with my absurd hammer. Special abilities include a front-facing energy shield that lets him close the gap to ranged enemies and which gets upgraded later to stun enemies it touches, a powerful circular barrage and a quick shotgun burst. Basically he changes Livelock from twin-stick shooter to twin-stick brawler. Hex, meanwhile, is the ranged specialist, preferring to hide out toward the back of the group and deliver death from afar. His starting weapon is an EMR which acts like an assault rifle, but he also gets things like a sniper of sorts that can punch through multiple enemies, plus abilities such as armor-piercing. Rounding off the group is Catalyst, a support specialist who can heal and bolster allies with drones. For solo play she tends to be a bit trickier due to the lack of offensive abilities compared to her two companions, but with some careful play is still very capable of getting through the rather short 2-3 hour campaign.

Regardless of which character you choose to play as Livelock delivers on the action. The controls feel tight and responsive which is so damn important in this genre, yet seems to be something many developers struggle to nail. There is, however, a slight touch of imprecision when using a controller which could be improved upon with some updating, but overall control is great and there’s a palpable sense of weight behind attacks and movement, bolstered by the fact that the game has a moderate level of environmental destruction. It’s a lot of fun to walk through thick walls and watch them crumble or to shove cars aside while swinging a colossal hammer. Livelock conveys the size of the characters well, and I love that. This also feeds into the combat as cover plays an important role in letting health recharge, or just grabbing some breathing room. Amidst the action it can be a little tricky from time to time to tell the different between destructible terrain and something what will provide safety. It won’t take long to get the hang of it, though. Enemy variety and behavior also goes a long way toward making the action fun. Like most games in this genre Livelock loves to throw screenfuls of enemies at you, something which can sometimes make the dodge button feel a bit ineffective, but it does a good job of mixing them up and making them behave differently. Basic suicide bombers charge in while artillery bots try to stay distant and hammer you from afar, while cloaking enemies skirt the battlefield in order to get a bead on you. This mish-mash of foes makes battles feel more interesting, and in co-op gives everybody something to do. The vanguard might be the king of smashing stuff, but if he’s mired in a bunch of melee robots then he’s also at the mercy of the ranged units, so Hex can get in there and offer some firepower and maybe even some mines while Catalyst makes sure both of them are healed up with her beam-weapon and abilities. 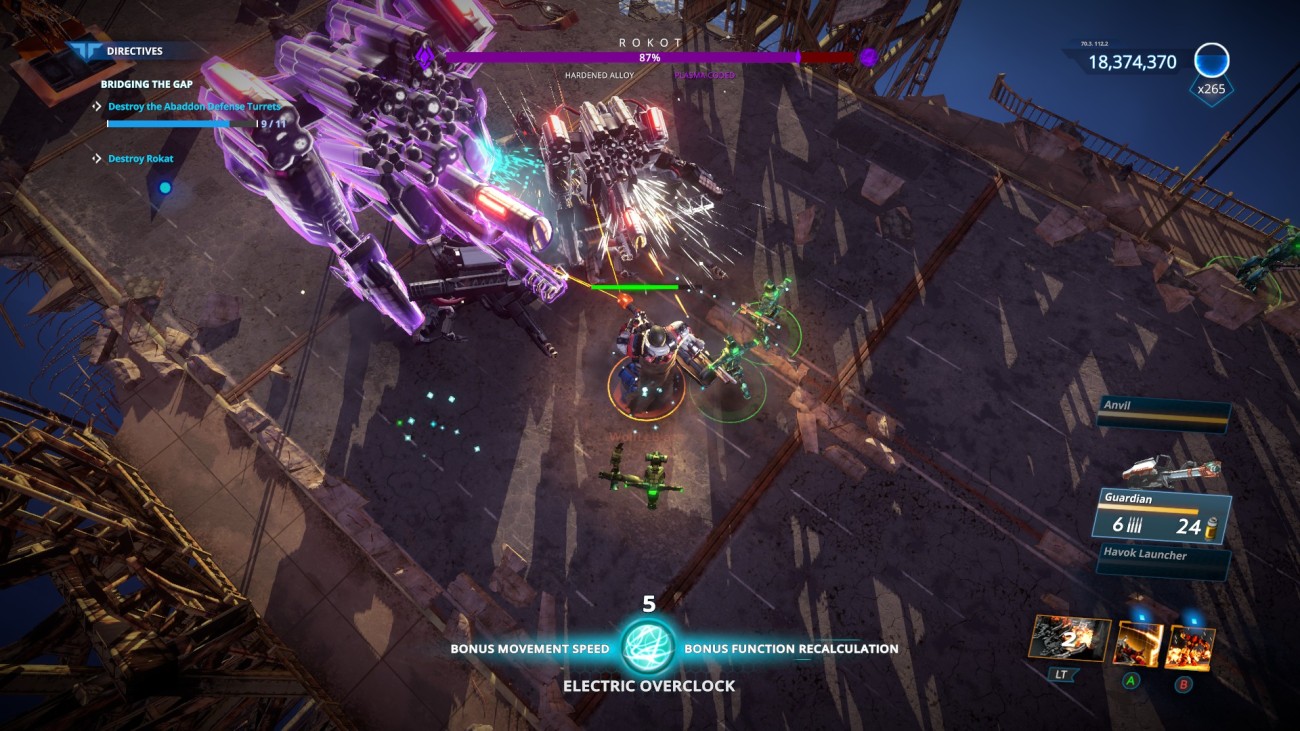 And that’s why the game’s definitely at its very best with three people in the action. It can be a lot of fun played solo, but the repetitious nature of each level can become too much when you’re stomping around on your lonesome. Toque have attempted to balance things so that every character can take on all enemies and complete the campaign solo and for the most part have succeeded. With a few people in the game all geared up as different characters everything becomes so much more enjoyable, though.. The sheer repetition of fighting through hordes of enemies fades, and in its place comes laughter. Even playing with other random folk can be a great experience, although I did note that finding a co-op partner at the moment can be rather hit or miss, at least on PC. The problem with this bit of praise, however, is that something being more fun with friends or other people isn’t necessarily because of the game itself. Most things are fun if you bring friends along, and in the case of Livelock it’s fair to say that from a purely co-operative standpoint it’s nothing special. There isn’t much room for actual co-operation as such, which is a shame. It’ll be interesting to see if the game ever gets expanded with abilities which can bounce off of each other in order to prop-up the co-op some more.

Getting back on track the enemy roster is rounded off by a series of enjoyable boss-battles and the Upgraded foes, which are bigger, badder robots who’ll tag along with regular hordes and wield special powers, such as stasis fields. Naturally they can take a lot more damage before falling, but they also reward you with cosmetic items. Your robo avatars can be mildly customised with new heads, paintjobs and capes, because nothing is more freaking awesome than big, stompy robots wearing capes. Be we warned, though, this isn’t a loot-heavy game. The progression system is entirely linear, so you’ll be unlocking new weapons, abilities and ability modifiers based on leveling up, and the range of new cosmetic items is quite limited. Your weapons can be improved by spending a currency you collect in game, but again it’s linear; you spend the money, the stats go up. I would really have loved to see a more inventive or interesting progression system implemented here, perhaps one where you could choose which stats on a weapon to upgrade at the cost of something else. Still, this basic system gets the job done.

Outside of the short campaign mode Livelock offers up a survival mode where players face off against endless waves of enemies. Chasing the high-score also offers some reason to venture back into the  campaign, although I think most people will struggle to muster up enough enthusiasm for a second run. It isn’t that the gameplay isn’t fun, it’s just that there’s very little to warrant going through it again unless you found yourself really, really into the action. As it stands, then, Livelock isn’t a very meaty game, then, so those seeking something with a good runtime might want to hang around for a sale before breaking out the Steam Wallet.

Moving on to the technical aspects of the game Toque have done a pretty reasonable job across the board. The environmental design by itself is relatively bland – You’ll be stomping around completely standard ruined streets, underground parking lots and other largely grey areas – but there’s a nice amount of detail and colored lighting that helps make it more visually pleasing, and it only gets better as the destroyable terrain and particle effects get added into the mix. There’s also some nice attention to detail within the animations. Different guns get different reload animations, for example, which might not sound very impressive but in most top-down games developers will cheat heavily since it’s hard to see the animations. It chugs along quite well, too, although I did experience some sizable dips in framerate from time to time despite sporting a GTX 1080. 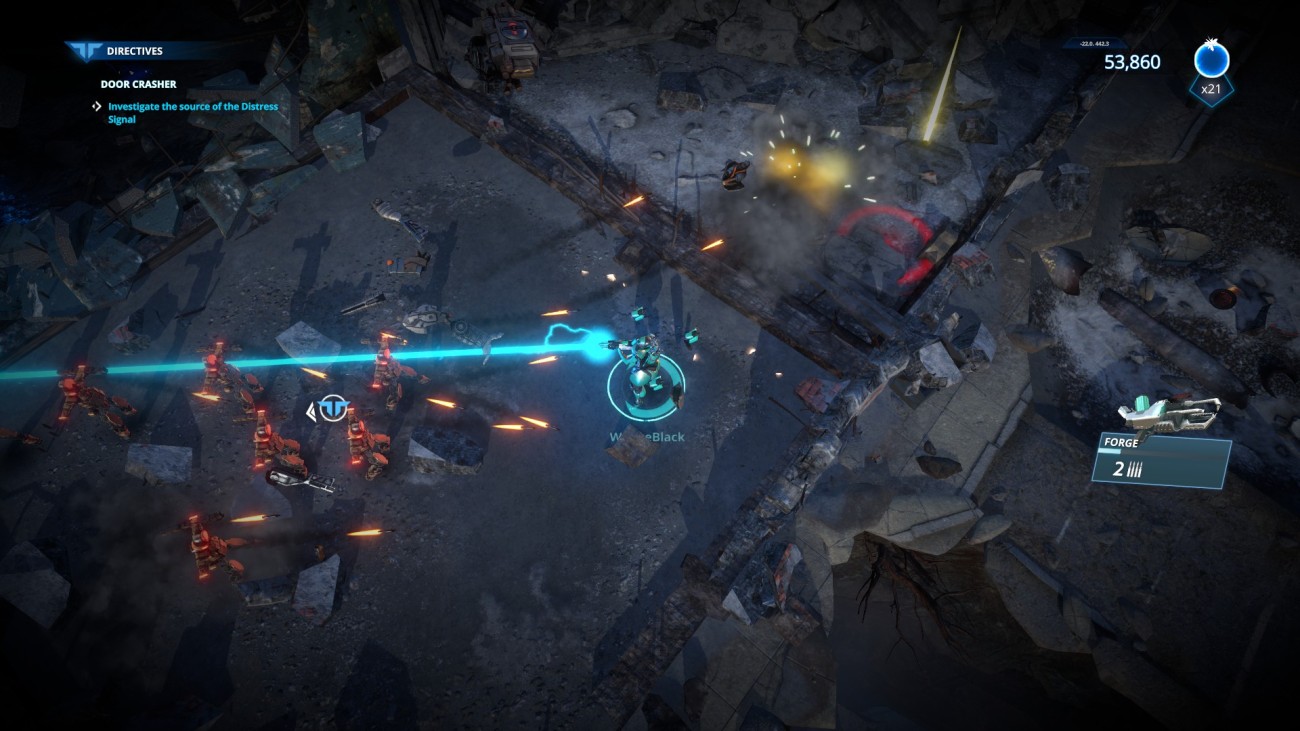 The audio is pretty solid, too. The voice acting isn’t anything special, partly because of the stiffness of the writing, but the rest of the audio design helps sell the destruction and size of the mechs. In combat there’s a cacophony of booms, bangs and metallic death that is convincing.

Livelock is a tricky one, because as much as I really loved playing it, it doesn’t earn itself a full-on recommendation sticker. It’s not a game I feel people need to rush out and buy because it’s just that damn good, but it actually is rather damn good. Do you see what I mean? The point is that Livelock doesn’t deliver a good story, nor does it have a lengthy campaign. It does, however, do twin-stick action very well. Regardless of which character I played I had fun smashing through hundreds of enemies, checking out new helmets and capes, powering up my gear and chasing some high-scores as well. If you’re a fan of the genre already and eagerly await each new release, feel free to imagine a recommendation sticker on the bottom of this review.

Now hand me my hammer. There’s smashing to be done.