Norway has a rich folklore filled to the brim with creepy tales with which to scare unsuspecting children who refuse to tidy their damn rooms. It doesn’t tend to get much attention in the media, though. Developer Protagonist want to change that with Through the Woods, a game about exploration and monsters.

You’ll be playing as one Karen, who has come with her son, Espen, to a remote house on the edge of a lake in order to get some work done. It doesn’t take long for Espen to disappear, however, captured by some strange old man who takes him away on a boat. Diving into the water Espen’s mother gives chase and winds up transported to a strange island inhabited by creatures and legends from Norse lore. Looking up at the sky reveals a partially destroyed moon, there are trolls and other horrible things roaming the night and quite a few abandoned villages containing helpful notes filling you in on some of the details.

If you’re hoping for a guided tour of Norse mythology then Through the Woods doesn’t go that far, but it does make good use of its source material, bringing out all sorts of cool stuff, including some seriously creepy wargs. Still, I’d like to have gotten some more background on the rich lore, although working it into the game organically would be a problem. Through the Woods already struggles with this as it is, opting for the old idea of scattering notes around the decaying villages.

Where the game struggles most is with its dialogue and voice acting. Whomever voices Karen clearly isn’t a native English speaker, delivering her lines in jarring fashion.This is sort of acceptable because through the narration you can at least believe that this is a Norwegian attempting to speak to someone in an unfamiliar language, relaying the entire tale to someone else. Of course this excuse doesn’t extend to rest of her dialogue. But the bigger problem is the lack of emotion in many sequences. Sometimes the voice actor nails it reasonably well, but far, far more often her voice doesn’t convey the amount of emotion you’d really expect in this unique situation. There’s even a few encounters where she remains oddly silent, apparently oblivious to the madness in front of her. I don’t think she needs to go completely over the top like we so often see in other games, but there’s certainly room at least some heavy breathing or some other indication that what she is seeing is freaking her the f*ck out. It grievously harms what is otherwise an intriguing tale. Between the awkward line delivery and the lack of emotion it’s hard to get properly invested.

Through the Woods does at least get its atmosphere right, arming you with just a flashlight with which to navigate the dark paths and villages. You don’t strictly need it because usually there’s enough moonlight to get by, but the closer over-the-shoulder view and little beam of light make you feel even more vulnerable in a game where you can’t fight back against any of the creepy beasts.

The darkness does help to hide some of the graphical problems, too. In the stark light of day the lack of anti-aliasing shows and even becomes a bit distracting. Once darkness settles in for its stay, though, this problem gets forgotten about in favor of the damn framerate which refuses to stay consistent. Even running a GTX 1080 I couldn’t maintain a solid 60fps, and there were several sections of heavy stuttering. Considering the entire game has been developed by a team of just five people it’s impressive that it runs at all, really, but that doesn’t negate the fact that some patching is required. Happily the devs have already confirmed a performance patch is coming.

As you amble through the woods you’ll occasionally run into creatures taken straight from Norse lore, like shambling trolls or a blind beast that runs when light is shone in its face. These are where Through the Woods introduces more traditional gaming elements, albeit in very basic form. You might have to sneak past a monster or shine a light in its face to keep it at. It’s basic stuff that’s sometimes enjoyable and sometimes not. There’s some clumsy controls letting it down, stopping you from turning on the spot quickly or feeling anything less than a clutz. There’s also a few sections that are less scary and more comical, like an early run-in with a creature that can be scared off using the flashlight. The way it bounds around the environment and even teleports into place makes it a lot less terrifying than it should be. But hey, at least a run in with some wargs is creepy, with my first attempt at getting away from them ending when I heard some breathing, turned around and found out it had been following me for a while.

It’s a bit of shame that the game ruins its own tension a little by announcing the presence of these creatures via creepy music. The upside to this is that when the music kicks in you begin to look around furtively, casting your eye to the shadows in case something is watching you. The downside is that when there isn’t music you’ll feel perfectly safe which damages the sense of tension. What this resulted in was me basically just skipping along the forest paths without a care in the world, all that lovely atmosphere I praised earlier amounting to very little.

If you hadn’t already guessed it Through the Woods sits within the walking-simulator category for most of its short 4-hour runtime with just a few more traditional gaming segments tossed in for good measure. It’s very basic stuff. And yet I was also surprised by how it managed to keep me relatively engaged throughout. Don’t get me wrong, it’s far from a great game, or even a good one. It’s merely passable horror, but the fact that it has an original idea and some cool moments elevates it a little. 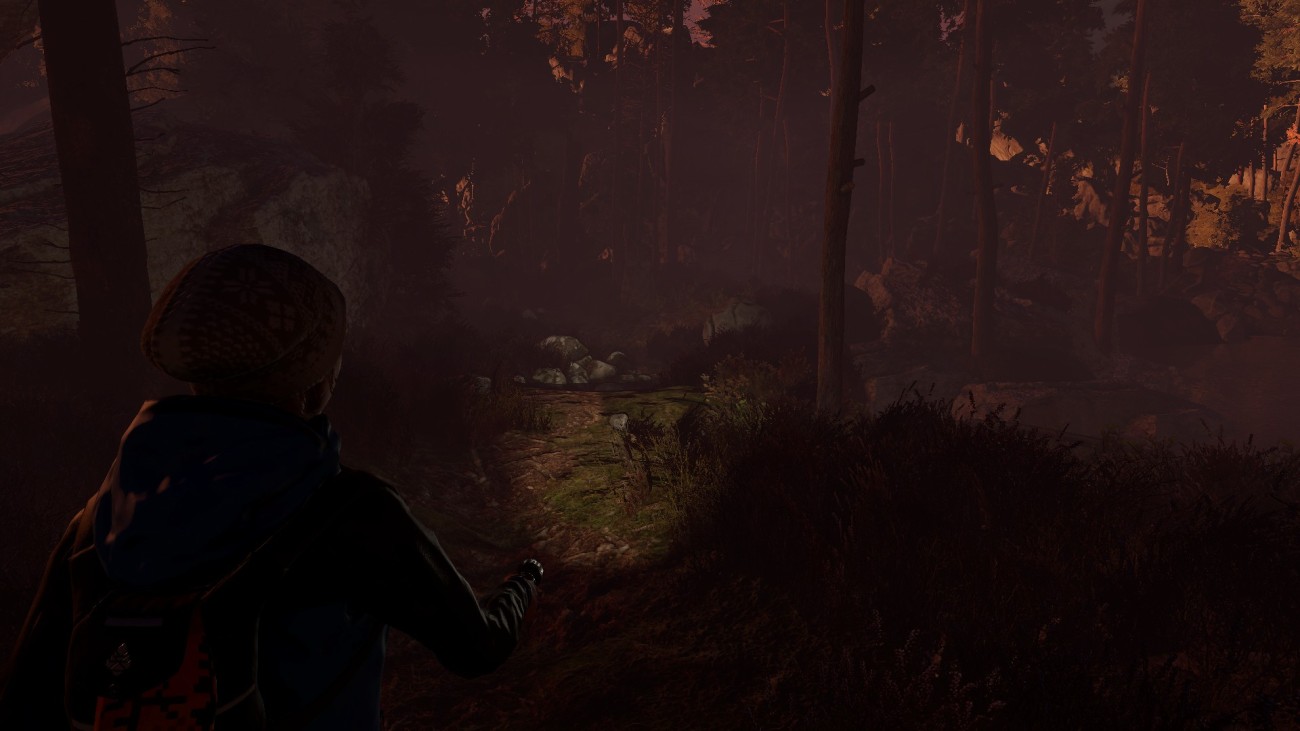 A  pleasant surprise in places Through the Woods has its fair share of problems holding it back from greatness. More than anything it’s a pretty good showcase for 5-man development team Antagonist. With  some extra cash at their disposal they could really create something special. But that’s talk for the future, and right now I’m here to review Through the Woods. As it stands it has a few good ideas, but isn’t something you need to consider getting unless you’re a die-hard horror fan looking for a quick fix.

Tagged as: Antagonist, developer, pc, review, steam, Through the Woods