Note: you may have noticed that some of these images are squashed, and that’s because the in-game photo mode seems to display at a lower resolution than my monitor.

The problem with creating a new game every year that’s based on a real sport is that eventually each game starts to feel a bit similar. Without any huge shake-ups in the sport the developers are left to twiddle their thumbs. To their credit, Codemasters have at least attempted to do a few new things, but their efforts have been inconsistent over the years. Now, though, they’ve gone and done it. They’ve made their best F1 game to date.

Out on the track it’s business as usual. Codemasters have always opted for something that feels real rather than actually being a full simulator and personally that has always sat well with me. The increased grip and speed of the real-life F1 machines has been translated into digital form so you’ll now find yourself careening around corners with the throttle to the floor whereas last year you’d have to lift off. Feedback is still handled well for those of us who have to use a regular controller with the vibrations and audio doing a great job of letting you know what’s going on at all times. But the biggest and best change is the tires where there is now a more pronounced difference between compounds, I feel. An ultra soft feels different than a super soft and is leagues away from a medium compound. Whereas before I often found the different tire choices felt similar, here swapping from a softer option to a harder rubber changed the way I drove.

Potentially dull races can get mixed up by the joys of a dynamic weather system so that an early drizzle could leave you trying to decide when to swap over to dry tyres, or an early lap in qualifying can land you pole position because the heaven’s suddenly open and decide that the region would really be improved with a new lake. Once you toss in tracks that get grippier as more rubber is laid down you’ve got a pleasing amount of dynamism to races to consider.

The A.I. hasn’t changed massively but it does seem like some tweaks have been done. Some excellent battles can be had with them if you turn the difficulty up. In fact in my very first race I had a pleasing fight with Verstappen that lasted several corners with us wheel-to-wheel.

Speaking of difficulty the previous F1 games had a problem where you’d have to turn the difficulty up quite a lot to find a reasonable challenge, but then it would suddenly jump up in difficulty. It was often hard to find a good balance between too easy and too damn hard. Here they’ve opted for a 0-100 system so you can more finely tune the A.I., and it seems to work rather well.

At the start of the race you’re now also given the chance to select from one of two recommended pit-stop strategies created by your team, but you can also edit these if you feel like you have a better plan, or if like me if you completely overestimate how well you can manage a set of tyres. You’ll often get a message from your race engineer mid-race to ask if you’d like to keep the current strategy or switch to a new one they’ve devised, which goes a surprisingly long way toward making you feel like real driver in the cockpit of an F1 machine. 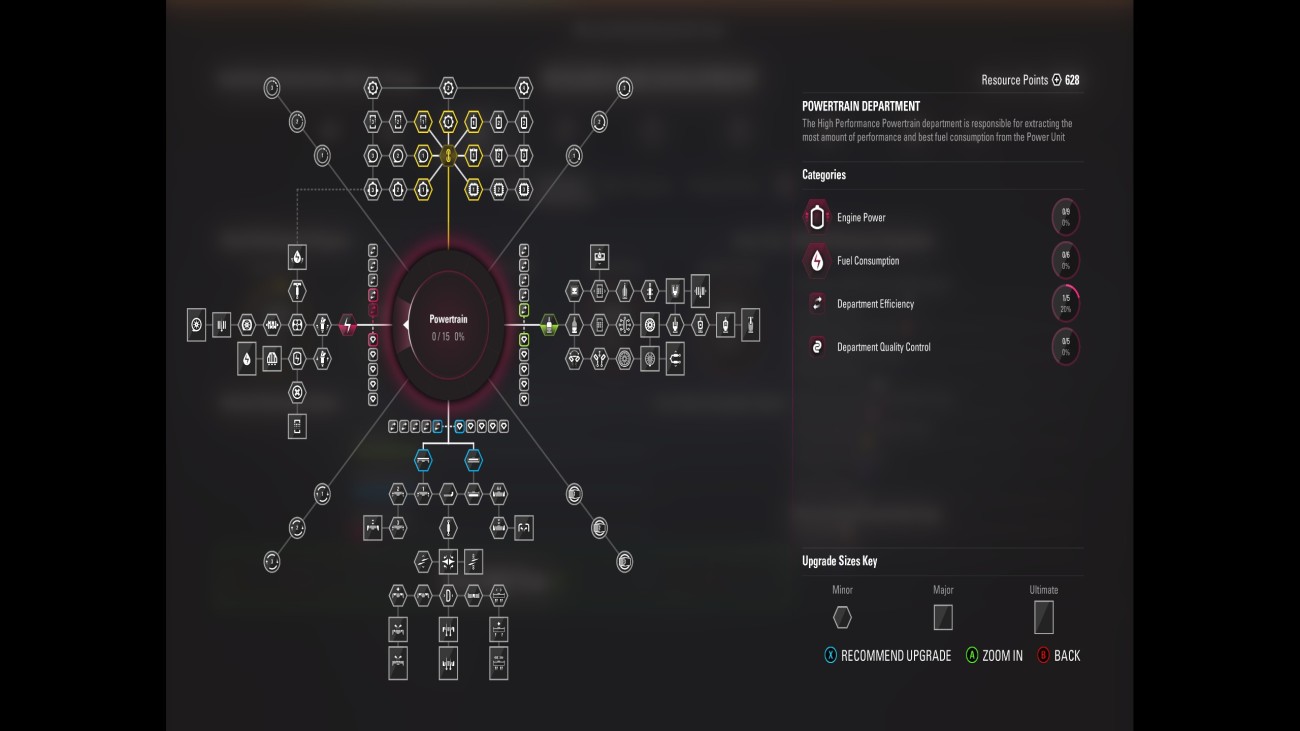 But the real story of F1 2017 is how Codemasters have worked to create a much more thrilling off-track experience. Just like in the real sport you now have to manage the various components of your car, choosing when to swap out an aging engine or gearbox for a new one, while always being aware that using up your allocation before the season is over means taking penalties. By the third race in my career run-through my McLaren had already managed to chomp its way through a bunch of parts and performance was suffering. Even that early I had to make choices about whether I was going to replace them, or keep running the existing ones with the decreased performance and possibility of them completely failing.

This feeds into the on-track action so that mid-way through a race components can degrade further and cause problems. At one point my gearbox began to have issues so my team told me to avoid shifting as much as possible, and then another part started having some troubles so I had to keep the revs lower by short-shifting. Effectively neutered I limped the car home, fending off as many people as possible for finally finishing up in 10th place. It was almost like a moment of dramatic storytelling in a game other without narrative.

You can increase the durability of your car, though, which is where the new research and development system comes into play. Just like in F1 2016 you still earn resource points by completing the five different test programs during the two practice sessions leading up to a race. These mini-games include driving through gates to prove you’ve mastered the track, managing tire wear and running a brief race simulation. They’re fun the first few times, but I admit constantly doing them on every track did begin to feel like a chore after a while. Still, at least they provide an extra reason to take part in practice sessions. Once you’ve got enough points you can head to the upgrade menu where it’s not so much a tech as it is a tech web. There are four sections to this sprawling mass of bits and bots; drive train, aerodynamics, durability, and chassis, and each of those, in turn, has a bunch of options to pick from. Now, on-track it’s fair to say that each upgrade is not particularly noticeable since just like the real sport performance boosts tend to be small but cumulative. It’s also fair to say that you can’t really tell one drivetrain upgrade from another when you’re racing. However, what this system does is make joining a low-ranking team and sticking with them feel satisfying and rewarding as you slowly but surely improve performance and claw your way to the front of the pack. I highly recommend the higher difficulty settings for the more authentic feel, as otherwise even a McLaren can get to the front easily.

The rest of the off-track stuff is familiar as the game’s modest budget means Codemasters have reused most of their assets from last year, so the same people are ambling around the same paddock as F1 2016. Other graphical improvements are small and few, but it has to be said that this is still a rather beautiful game in motion. Trackside detail looks good, the cars are faithful recreations of their real-life counterparts and the dynamic weather is gorgeous. The only hiccup in the presentation is the audio, something that Codemasters have struggled with in this series. It isn’t bad, but it doesn’t manage to capture the sound of the real deal, although to be entirely fair the current crop of F1 cars sound bloody horrible.

AH! But there is a solution to these confounding new cars and their strange sound and their insane grip. Yes, classic cars have finally returned and Codemasters have managed to pick out some true beauties, There’s the R26 that carried Alonso to his last championship eleven years ago, or the McLaren Mp4/4. In total there is twelve classic cars and these magnificent beasts handle so satisfyingly different from the 2017 roster, roaring and spitting their dislike as you battle them around corners. Maybe the audio isn’t quite there, but damn does the noise of those varied engines bring back a lot of memories.

These beasts pop up as invitational events throughout the career mode where you’ll be asked to do stuff like overtake a set number of cars. It’s a welcome break from the standard routine, a counterpoint to the sometimes monotonous trudge through an entire season’s worth of grand prix, but if you don’t fancy waiting around to drive a classic machine then that’s where the expanded championships can come into play. Other than creating your own personal single event or custom championship there’s a series of unlockable championships that include sprint races, reverse grids and a whole lot more, helping to flesh out the game. There are also time-limited events which you can participate in where you do things like control Verstappen after he took nose-cond damage.

You’ve also got the multiplayer stuff to delve into provided you’re willing to put up with the possibility of running into jerks who can ruin a race. There are plenty of leagues available to join, though, so that you can find like-minded people. Like before there’s a full co-op championship available that you can customize by removing events, choosing the length of races and which era of cars you wish to use or you can just take part in a single event if you don’t fancy committing yourself to putting up with the same person for hours on end, even if there is a save function.

Performance wise the game is almost flawless with my Ryzen 5 1600, GTX 1080 and 16GB of RAM easily powering fast 60FPS at 3440×1440 resolution. There were, however, a few tracks that did contain brief moments where the game would stutter. It wasn’t serious, but they are there.

As for potential glitches and problems I did encounter a few. Firstly when I used the flashback function at the start of a race because I completely screwed up my launch the game flipped out, keeping the entire grid locked in place before listing everyone as disqualified, then declaring the winner to be Vettel. In another weird instance my car had lost sixth gear, and after using the flashback feature the problem disappeared. Finally there were a few instances of stupid A.I. behavior like Raikkonen ramming me from behind and proceeding to push both of us into the wall.

Codemaster’s F1 series has a passionate fanbase who argue back and forth over the nuances of the latest handling model and a variety of other details. Doubtless there will be those who don’t find this latest iteration to their tastes, but to me this the best F1 game Codemasters have created to do. The return of classic cars fleshes out a package that has felt somewhat barebones of late, while the improvements to R&D and the inclusion of parts that must be managed serve to make sticking with a single team for more worthwhile, while also increasing the immersion factor. When you put all of that together with the excellent on-track action you’ve got one hell of a racer with only one genuine flaw: where’s the VR support, Codemasters? Maybe next year. But for now rejoice, because F1 is exciting again. Well, the game is, at least.