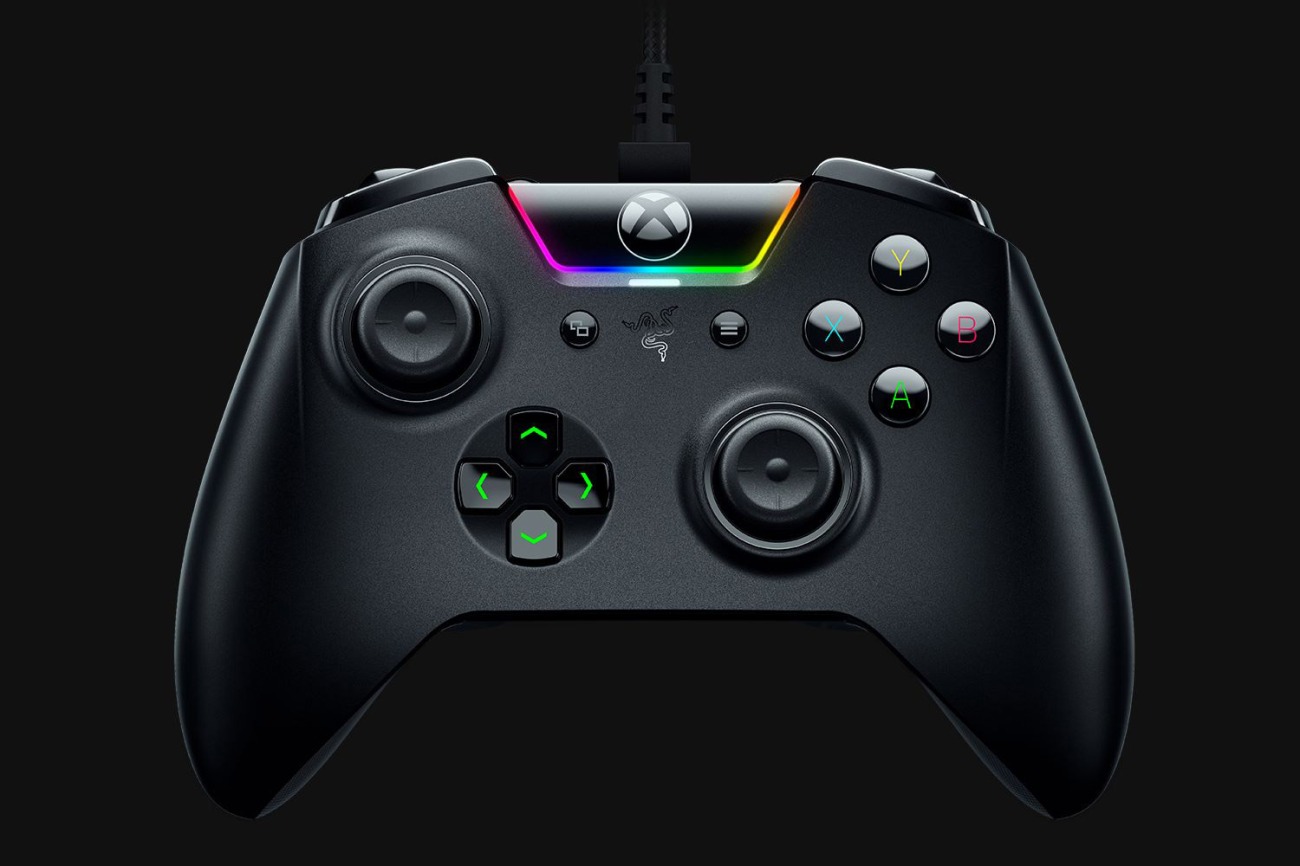 Review unit provided free of charge on loan from Razer.

Regardless of whether you’re the type of person who is loyal to Microsoft or Sony, it’s pretty damn hard to deny that the first time you held an Xbox 360 controller it was a damn revelation. It sat in the hands like it was molded for your individual needs. The Xbox One controller is just as good if not better. So how do you improve on it? Well, according to Razer you give it more buttons, some RGB LED lighting, swap out the d-pad and then slap a big price tag on it. Enter the Wolverine Tournament Edition.

The connection is wired using a braided micro-USB cable that stretches out to ten feet, although frustratingly the connection area on the controller has two small plastic shelves on either side that mean you can’t just use any old  Micro USB cable, you must use the one Razer provides in the box. What if that cable breaks, or if you want a shorter or longer cable? Tough luck. It’s a design choice I simply can’t wrap my head around. There is no possible reason I can conjure up to justify it.

It’s also a tad surprising that you can’t unplug it and go wireless. Now, certainly a wired connection provides the best possible signal transference from the controller to the console or PC and you don’t have to worry about running out of battery power at the worst possible minute, but in 2017 there’s no denying that a lot of people also like the freedom that wireless can provide, so it’s a shame that you can’t unplug the cable and run the Wolverine off of batteries. Even the Wolverine Ultimate doesn’t have wireless capabilities, while the Wolverine’s closest competitor, Microsoft’s own Xbox One Elite Controller, can be used wirelessly or wired.

The ergonomics are superb, albeit not quite matching the comfort levels of the standard Xbox One controller whose luscious curves still get me a little excited. Ahem. Some lightly textured rubber on the back of the hand grips help keep your delicate little fingers in place during those tenser multiplayer matches, and your index fingers naturally rest on the two extra paddles that the Wolverine has squirreled away on its rear. More on these extra buttons and paddles soon.

Its heavier than the standard Xbox One controllers, but actually slightly lighter than Microsofts own Elite controller. It’s a good weight, feeling nice and chunky in the hands without being absurdly hefty. In other words, it feels like a good weapon to throw at a friend whenever you lose in a split-screen game.

Since this is 2017 there’s even a strip of Razer’s Chroma RGB LED lighting running just below the Xbox home button that you can customise using the Razer Synapse software. You can, of course, opt to have a single static color, or you can have it flash in reaction to button presses or force feedback rumble.

The serviceable, but ultimately not very good for fighting games, D-pad of the original controller has been swapped out for Razers own design, so to put it through its paces I slapped on Injustice 2, which I hadn’t played for a while, and got promptly demolished. But that was my rustiness and not the controller which performed admirably. Razer’s D-pad is a step-up from the standard one, letting me be much more precise with my inputs. My only complaint here is that the right directional button felt a little less clicky and tactile than the other three. This could just be a small production issue in my test unit, though.

The four face buttons have been changed, too, with Razer changing them over to something springy that feels more akin to a mouse click. They took some getting used to, mostly because they require more force than standard controller buttons to activate. It slowed me down at first because I found myself in the middle of a hectic firefight, thinking I’d hit a button and thus dying. It’s something you get used to quite quickly, though, adjusting your playstyle until before long you’re hammering away like an angry baboon just like before.

The two thumbsticks have probably gotten the least change as they felt almost identical to the typical Xbox One controller to me, which is actually a shame for me as I’d like just a touch more tension.

As for your triggers and should buttons they’ve mostly been left alone in terms of their basic design. Personally, I’d like a touch more tension in the triggers for racing games, but they feel close to the standard Xbox One controller, except perhaps just a touch smoother. However, where Razer have changed things is in the inclusion of two switches, one for each trigger, that drastically shorten the travel distance on the triggers as well as changing the activation point. Immediately this became something I loved for shooters, although I do have to confess that using them in multiplayer almost felt like cheating as their much shorter travel distance does give you an objective edge over people using standard controllers. With that said, even in the hands of a superb player the milliseconds that the shorter trigger activation will save won’t make a huge difference.

On top of that, we’ve got two extra buttons that have been placed on the top of the controller, just in from the triggers and bumpers. These new buttons are relatively tall so I found it surprisingly easy to access them. Plus Razer have added a very small, flat area between the triggers and bumpers to help aid you in reaching the new buttons without accidentally pressing anything else.

And if you feel like you may need a few more buttons then Razer have you covered with two paddle-esque buttons on the rear of the controller that sit exactly where your index fingers reside. Given their location Razer smartly opted for them to require a bit of pressure to activate, although there were a couple of occasions when I clicked them accidentally. 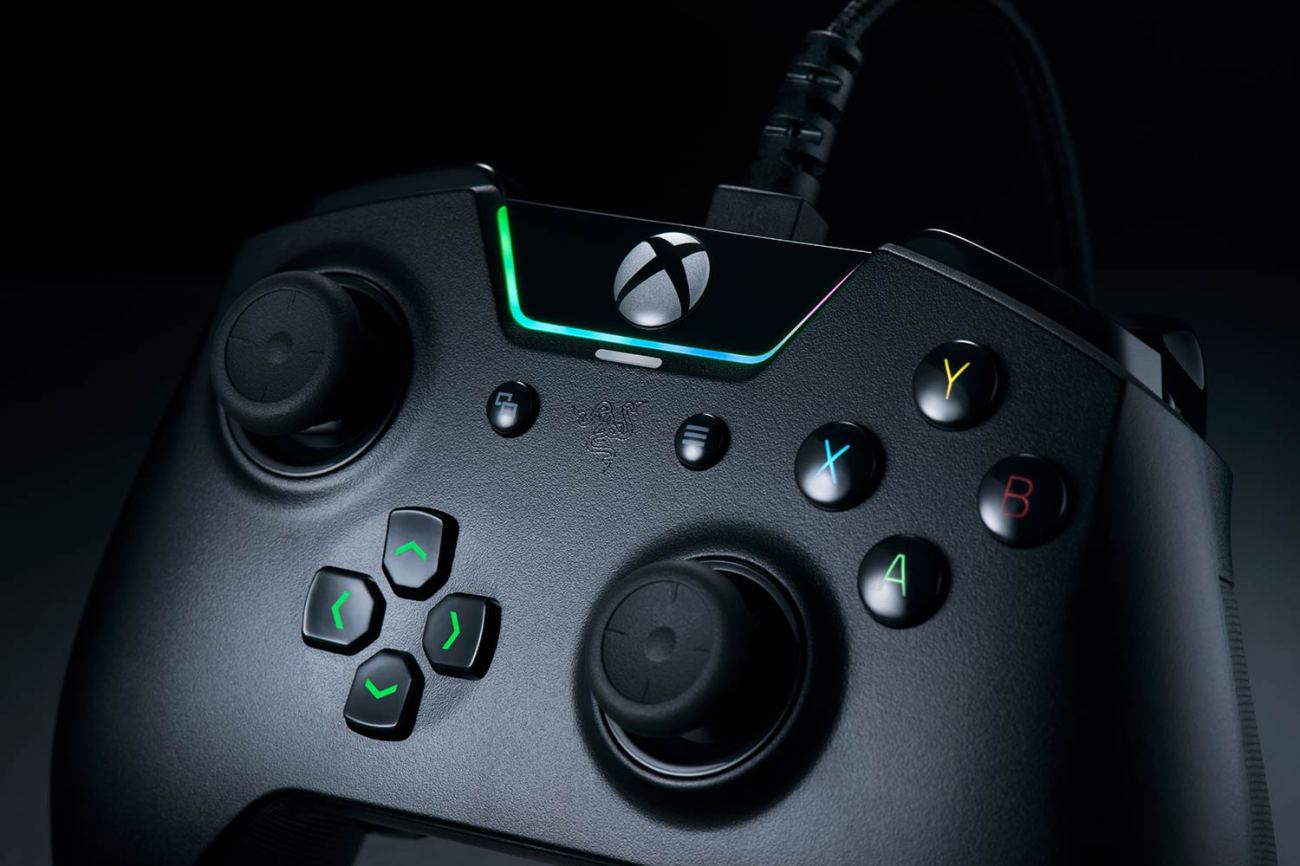 These extra buttons and the RGB LED strip can be controlled through the Razer Synapse software which is also available as an app for your Xbox One. On PC every single button can be remapped, but on Microsoft’s console only the four extra ones can be altered. However, you are free to remap these buttons to any of the existing controls, including thumbstick movements. For example in the recent Call of Duty: WWII you could set one of the extra buttons to activate a Killstreak reward so that you don’t have to take your thumb off the stick. The software itself is easy to use if somewhat visually unexciting. While you can record macros on the PC that feature is missing on the Xbox One.

Where Razer have tripped over themselves is pricing: at around £110-120 this is not a cheap choice for anyone. Microsoft’s own Elite Controller comes in at the same price but also includes a carry case, batteries for wireless mode, six thumbsticks that can be swapped out and two D-pads to choose from. Now, to be fair I’ve not personally gotten hands-on time with Microsoft’s pricey controller so I can’t tell you if its better, but purely on paper the extra stuff you get will sway many people. Razer do have an Ultimate version of their Wolverine that comes packaged with swappable thumbsticks, two more buttons to use and other goodies including carry case, but that adds about another £30-40. Ouch.

Razer have always priced their products high, but I feel considering how good the regular Xbox controller it’s pretty hard to justify splashing so much cash on a new one for the vast majority of people. That makes it tricky to put a recommendation sticker on because the simple fact is that I wouldn’t recommend it to most folk.

But if you toss aside the cost then the Wolverine is pretty damn good. It feels responsive, fits nicely in the hand, the extra buttons are handy and the ability to reduce trigger travel is great for shooters. The software on the Xbox One is a breeze to use, too, and while the lighting strip may be utterly pointless the truth is I actually kind of like having my gear lit up like a Christmas tree.

In short, I think it’s a good product that would have made more sense sold at a slightly cheaper price to undercut Microsoft’s own Elite controller.