Wulverblade Review – Twelve highlanders and a bagpipe make a rebellion

Review copy supplied free of charge by the publisher.

As a member of the kilted nation known as Scotland, I’ve always felt that me and my kin don’t get much representation in video games, our brief appearances usually being limited to some swearing or a heavily stereotypical character who loves drinking fighting and is ginger. But Wulverblade seeks to put Scotland in the limelight, specifically, our history against the mighty Roman Empire where the Pictish people held against the best the Romans could offer before Hadrian’s wall was constructed and Rome decided it just wasn’t going to be worth the bloody effort.

So, to break the stereotypical image of the Scottish you play as a ginger guy or girl who loves to fight and drink Okay, so the Scottish stereotypes are true. Sue us. We like fighting. We like drinking. And gingers are awesome. We’re a nation of violent, angry ginger people.

Oddly enough Wulverblade actually arrived on Nintendo’s Switch console toward the end of 2017, and is only now arriving on Xbox One, PS4 and PC. So let me get boozin’ and let’s get this review done. 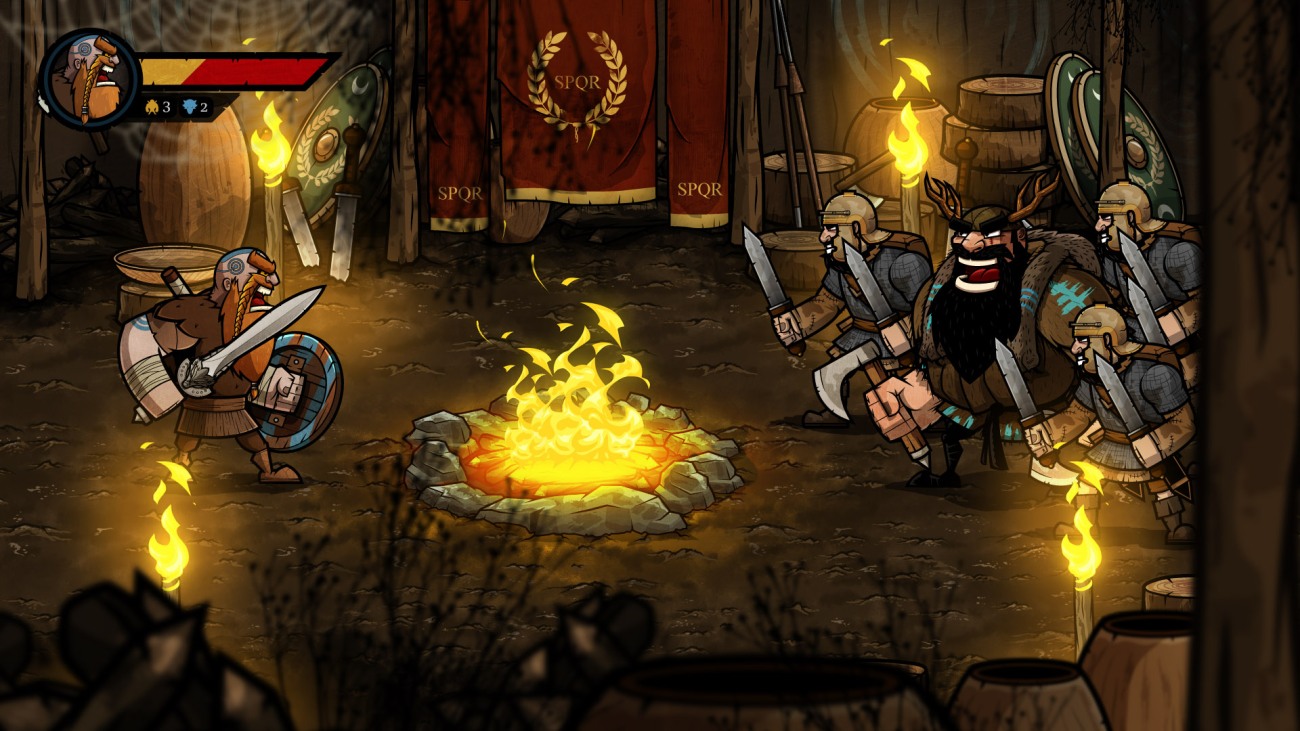 Wulverblade doesn’t aim for historical accuracy, rather it’s a fanciful tale of three members of the Northern clans seeking to halt the advancing Roman power that has already conquered the southern portion of Britain, now known as England, while also having to deal with traitorous southern clans who have decided to ally with the Romans rather than attempt to go up against their impressive military. On their quest to defend Scotland our heroic trio will slaughter hundreds upon hundreds of the enemy, and thus if you were hoping for something of a history lesson about what really happened between Rome and the Highland tribes then you’re better off heading to Google and doing some reading.

With this said the developers did spend some five years researching the time period and traveled to numerous locations around Scotland to get inspiration, and as such there are several videos giving you a small tour of some of them. It’s a nice touch.

Despite the lack of plot the developers have spent time crafting some cutscenes and we get full voice acting, too, although it’s a bit iffy to say the least. I would have liked the trio of heroes to be given much more distinctive personalities, but really their only differences boil down to some stats: Caradoc is the balanced fighter and actually the primary protagonist: Guinevere, the standard fiery Scottish lass who is the more agile one in the group; and Brennus, whose all about hitting stuff really hard.

On the gameplay front what we’ve got is a pretty standard side-scrolling hack ‘n slasher with a dash of two -player local co-op for good measure which is, unsurprisingly, where the game really shines, although the lack of online co-op is a massive missed opportunity.. All three characters behave largely the same offensive loadout, sporting a basic attack that you can hammer like a madman as well as a heavy attack provided you’ve snagged a hefty weapon that’s lying around. This gets spiced up just a tad by character’s having a variation on a charge move,  plus a move that will throw pesky Roman soldiers into the air where you can merrily juggle them with a flurry of strikes or maybe even a heavy strike or two. You also get a ground-pound for good measure, and can even grapple an enemy in order to bash their face in or throw them It’s not a complex or in-depth system of offensive options, but it’s still quite fun to unleash a hailstorm of strikes against a group of enemies and then watch them go hurtling backwards. It’s even more entertaining when various limbs get chopped off, especially when you’re juggling them in mid-air, something Guinevere excels at. Indeed, this is a surprisingly gory game at times, reveling in some good old blood. 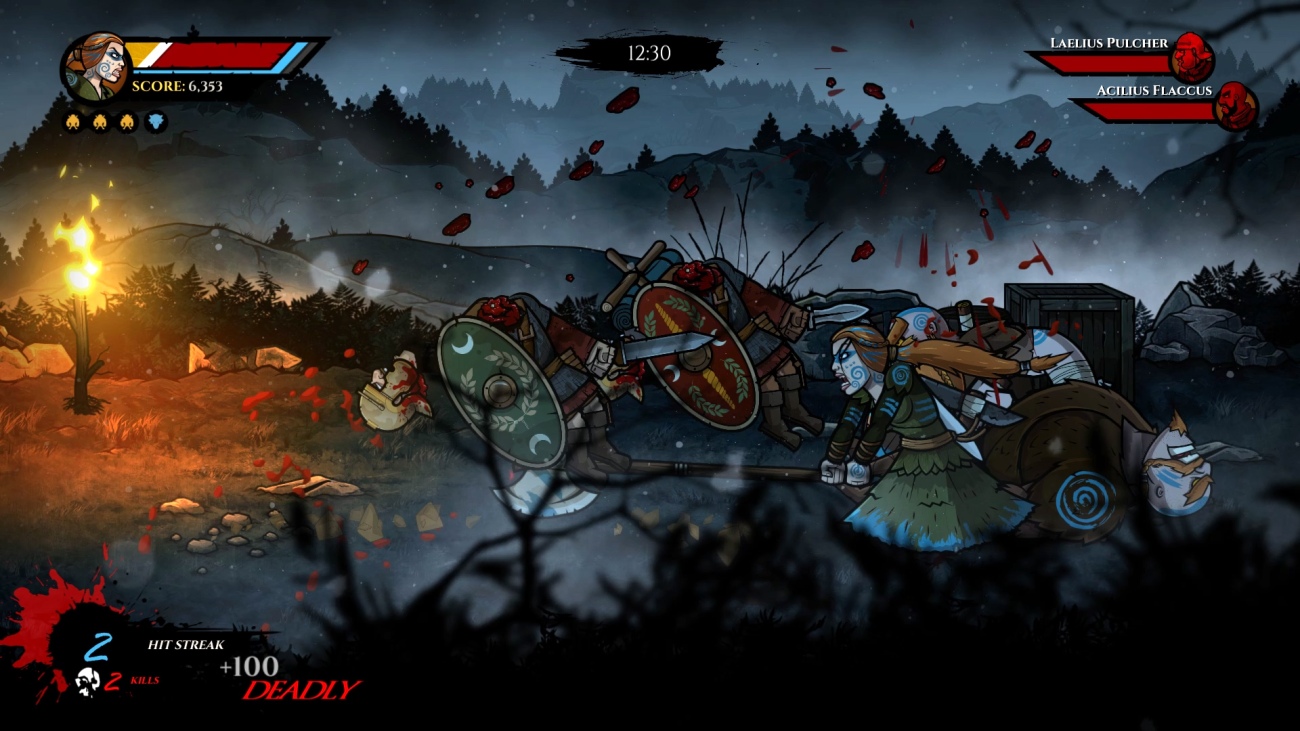 When it comes to defending your face against the incoming sharp pieces of metal, though, I think Wulverblade has some issues due to its often heavy and slow feeling controls. Take, for example, how you only jump and run on the horizontal plane, meaning you can’t jump or run diagonally or vertically, so the only way to dodge some attacks is to walk very slowly around them which looks extremely odd.. Then there is the defense button which simply isn’t as responsive as I’d like, and for some reason you can’t change direction while it’s held which makes fending off multiple attacks coming from multiple directions nearly impossible. However, if you do nail a block at the right time you get a moment to counter-attack. There’s a dodge move, too, that can be activated several different ways, and yet they all feel stiff and clunky to me. No matter how much I played and how high I set the difficulty

Now, to be fair it’s entirely possible the game is meant to be like this to give combat a more methodical, slow feeling. Maybe I’m meant to be more careful and only attack a few times before backing off, but everything else in the game seems to scream get in there and cut some damn limbs off. The myriad of enemies on the screen certainly points to a manic hack and slash approach, and for that I much prefer a slick, responsive set of controls.

Another issue I had with the controls is how the standard attack is mapped to the same button that is used to snatch up throwable weapons, food for health and other items. The game’s reasonably good at figuring out what you meant to do, but there were still far too many times when I snatched up something from the ground rather than impaling an incoming Roman soldier. With no way to rebind the controls it was something that continuously annoyed me.

But despite these clear problems, I still had a blast fighting through the various enemies who pop up. There’s something immensely satisfying about lopping off heads and arms.

To help you survive the Roman 9th Legion you also have a Rage mode that builds slowly as you hack foes into pieces and pick up bags of mushrooms, a nice nod to the theory that many “berserker” warriors worked themselves into a frenzy by eating mushrooms. When you activate Rage you get a short period of invincibility and some really rapid strikes that let you go to town on your enemies without a care in the world.

The other trick up your sleeve is the ability to call in a pack of wolves once per level who deal significant damage to any Romans stupid enough to get in the way.

All of this stuff feeds into your final score on each level with leaderboards letting you see how well you’ve done compared to everyone else or your friends. You get the standard bonuses for how quick you can get through the level, how many of your three lives you’ve lost, the difficulty and more.

Outside of the main campaign there are a few other options to help keep you entertained, starting with a classic mode where you get three lives and that’s it – lose them and its game over. There’s also an arena mode where you can battle waves of enemies in order to advance up the leaderboards or simply practice your slashing, dashing and bashing. Finally, there’s an unlockable mode that you get access to for beating the campaign, but I won’t spoil that because it ties into the game’s final twist.

I’ve also got to commend the game’s visuals and music. The art style is bold, vibrant and certainly catches the eye while the music captures the feel of a tribe marching to war. The various locations mimic reality nicely, the team’s research clearly paying off when it came to level design, plus there are a few moments where our heroes get contrasted against the background that are just lovely to look at. There were a couple of mild framerate dips throughout, but overall this looks and sounds great.

So, Wulverblade is a rather flawed yet still hugely enjoyable hack ‘n slash adventure in the vein of Golden Axe. It doesn’t do anything particularly new, but if you’re a fan of the genre and need your fix of side-scrolling violence that just so happens to contain three prime examples of the gloriously ginger, hard-drinking, fists-a-flying Scottish nation then Wulverblade is worth checking out.