This headset was provided free of charge by HyperX for review.

Having done very well so far with their Cloud line-up the folk over at HyperX have decided to have a stab at creating a wireless headset so that you can happily amble around your house oblivious to the cries of your attention-starved family while listening to music. Good times. Or at least, that was what I initially thought but as it turns out the Cloud Flight, which retails for around £120, isn’t very good for ignoring those people in your life that you feel obligated to be around. It is, however, rather good at gaming.

HyperX has gone with a subdued look for the Cloud Flight, finishing the whole headset in a flat black and only adding a splash of color in the form of two red wires on either side. The only other visual flourish comes in the form the two red LED lights in the form of the HyperX logo on the earcups. By tapping the power button you can cycle between effects for the lights, namely solid, breathing and random. I’ve said before that even though they’re useless, especially on a headset where you can’t even see them when they’re on your head, I kind of love LED lighting, but in this instance, it isn’t RGB so you can’t swap colors. Sorry, HyperX, but if you want LED lighting in 2018 it needs to be RGB.

In terms of build quality, there’s very little to find fault with and plenty to praise. At 300g it isn’t the lightest headset but it’s far from heavy on the head, and when you pick it up and give it a flex there’s no creaking or feeling like it’s going to snap under strain.

Comfort is equally impressive. There’s some soft padding on the band, and while the padding on the earcups might not be as generous as I’ve seen on other headsets it’s still pretty damn comfy on the ears, although it can get a tad hot during those longer sessions. I’ve become accustomed to the automatically adjusting ski-band system on my Arctis 5 headset lately so switching back to manual adjustment was a bit disappointing, but the adjustment on the Cloud Flight feels nice enough, though I’d like a little more resistance on each click of distance. The pressure that it puts on your head is perhaps a bit more than I’d like as well, but overall I found the Cloud Flight to be pretty comfortable indeed and never once had a problem despite wearing them for hours at a time.

The padding that HyperX have opted to use sadly doesn’t do a very good job of canceling outside noise, though. This is obviously more of an issue if you happen to live in a noisier area or perhaps have family running around the house when you’re typically gaming, in which case your only sensible course of action is to lock said family in the basement so you can finally knock out a few quests in peace.

On the right earcup you’ll find a volume wheel that has very light notches, just enough to give you some slight feedback but at the cost of being imprecise. That might just bother me more than you, though, because I’m one of those people who feel like volume needs to be increased by even numbers only.

The left earcup has a few more things on it than the right, with the power button, a micro-USB slot for recharging the battery and a connection point for a standard 3.5mm audio jack so that you can hook the Cloud Flight up to a wider range of stuff. You’ll also find the connection for the microphone which is a small disappointment for me as I’ve grown used to having a retractable microphone that hides away in the earcup. But one thing I did quite like was how the mute button is actually the side panel of the earcup. It’s not a great feeling button, but it’s nice and easy to locate. A small audio cue informs you of when it’s muted or not, though I did find it easy to forget when I was muted and when I wasn’t, but it’s preferable in some ways to my Arctis 5’s blinding red light on the tip of the microphone that’s used to remind you its muted. 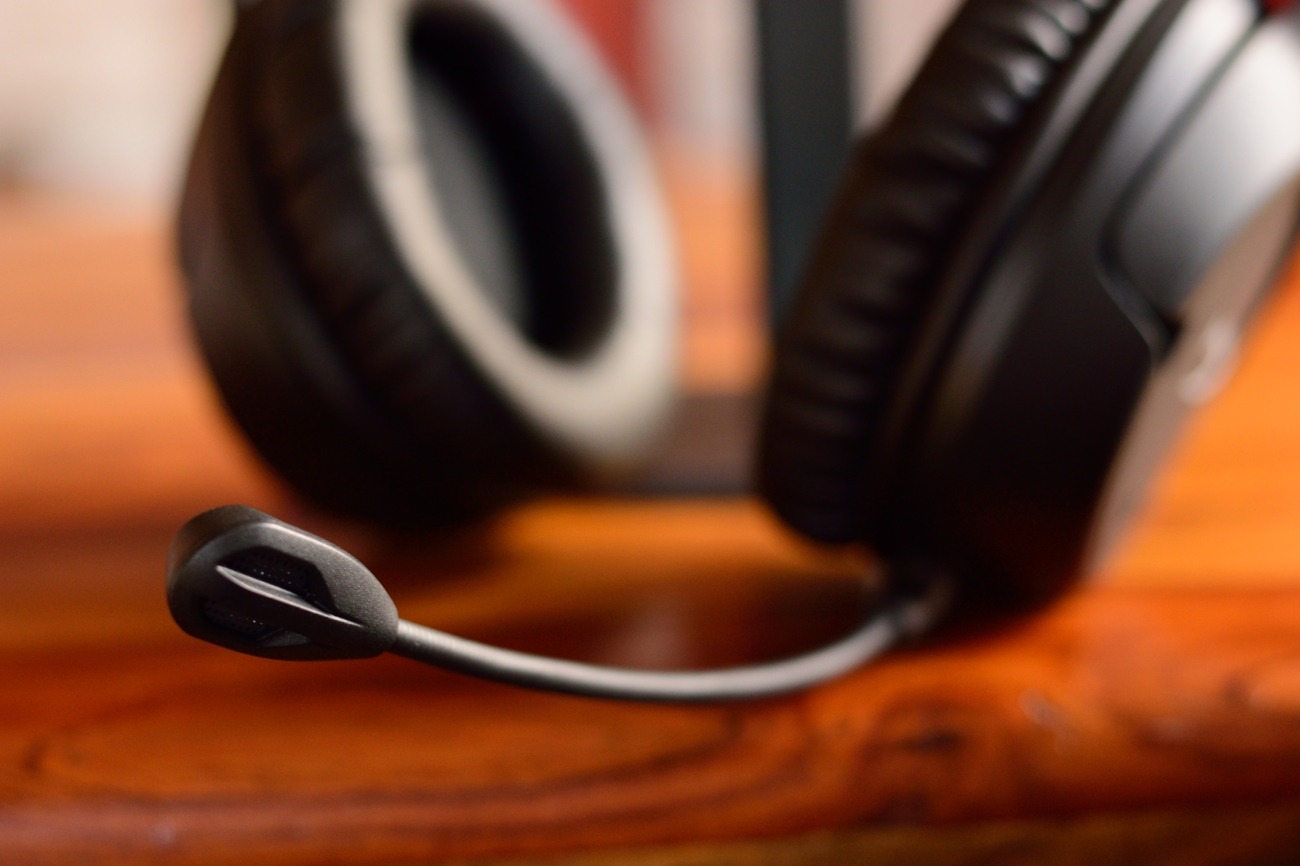 The wireless magic is handled via a simple USB dongle runs on the 2.4Ghz band, a potential problem as it does have known interference issues with USB 3.0 ports, something I’d recommend doing a bit of Google research on or just use a USB 2.0 port. The choice to go with 2.4Ghz and not Bluetooth is a little surprising because that way the Cloud Flight could have been used wirelessly with phones as well.

In terms of what devices you can connect to this beast will work wirelessly on PC, MAC and PS4, but sadly due to Microsoft’s decision to use proprietary tech the only way to use the Cloud Flight on Xbox One is through the 3.5 mm jack.

We’ll kick off with the microphone quality when speaking to your mates, trash talking people or just trying out your singing voice, because we all do that, right? The blunt answer is that given we’re in 2018 microphone quality on headsets is far below what it should be, and the Cloud Flight doesn’t really buck that trend with a purely passable effort. There’s a lot of compression due to the wireless (you can’t use the microphone or volume control when wired) and while the noise cancellation tries its best to keep your voice dominant it again only does a passable job. However, one plus is that the range on this headset is superb, so I found myself able to walk downstairs, into the kitchen, make a sandwich and come back upstairs while still chatting to my friends without any notable loss in quality.

That lack of quality drop continues with the sound itself as I was able to move around most of my house without noticing any loss of clarity. There were a few areas in my house where the sound did cut out completely, though, but overall I was happy with the coverage.

So that brings us to the murky area of how these things actually sound, a hugely subjective topic. For testing I ran through a selection of games like DiRT Rally, Dead by Daylight, Far Cry 4, The Division, CS: GO, DOOM, Rainbow Six: Seige and more.

As for the technical specs this headset has 50mm drivers with neodymium magnets,  is closed back and has an impedence of 32Ω.

For starters I found the general clarity of the audio to be sharp and detailed, though perhaps not quite as crisp as I’ve heard from other headsets. With that said I did notice a slight increase in clarity when running the Cloud Flights wired, indicating perhaps some signal lose or interference through the wireless. The bass packs some nice punch but doesn’t overpower everything else like a lot of “gaming” headsets tend to do, while the mids and highs came through clearly with perhaps a touch of warmth in the mids. Overall, I’d say the Cloud Flight sounds great.

The positional audio is very, very strong. There’s no virtual surround sound running here, and instead HyperX focused solely on delivering good stereo, which was perhaps a wise choice because virtual surround sound is damn hard to implement and more often than not just results in the sound getting muddied. I had no problem picking out where a killer was lurking in Dead by Daylight, hearing footsteps in shooters and enjoying the ambiance in Kingdom Come: Deliverance.

Interestingly, none of the sound is adjustable as unlike most other major headsets in this price bracket the Cloud Flight does not come with software that lets you play around with equalizers or anything else. The upside to this is that they basically plug and play.

Finally, we need to chat about battery life. HyperX themselves claim that with the LEDs turned off and the volume at 50% you can get around 30-hours of time, and I don’t think I can argue against that. With the lights turned on to solid that drops to around 13-hours, with the breathing effect being somewhere in the middle at 18-hours. That’s some really great battery life, though obviously it shows that the LEDs drain the battery at quite a rate.

However, there are a few issues, such as how the headset cannot be used when charging, even with the 3.5mm jack. Perhaps I’m spoilt by my Steelseries 340’s and its two swappable battery packs. There’s also no way of finding out how much battery is left until you get an auditory cue at 20% left in the tank. I feel like HyperX missed a trick here by not having something like a mode where you press the power button a few times to have the LEDs blink to provide a rough estimate of battery with each blink representing 10% or something like that.

So, considering this is HyperX’s first foray into the world of wireless sound I think they’ve done a pretty good job. There are a few missteps along the way, but overall this is an excellent headset delivering great sound and great comfort. The microphone could be better, a battery-life indicator would have been helpful and the noise cancellation is a little weak, but overall if you’re seeking a more subtle look paired with the freedom of wireless and some solid battery life then the Cloud Flight really is worth checking out.