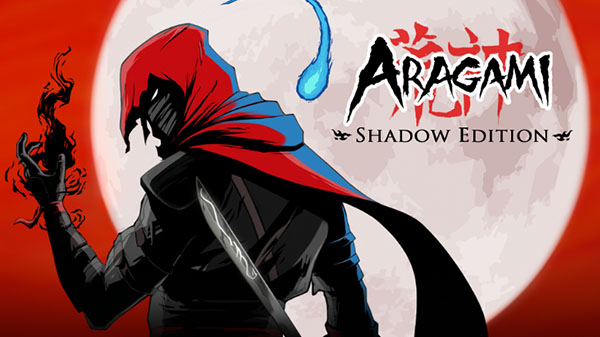 Originally released back in 2016 for PC, Aragami is now making its way to consoles in the form of the new Aragami: Shadow Edition, complete with a new piece of content called Nightfall, which you can buy separately, that acts as a prequel to the main game. So, since this was a title I skipped when it was first released and in celebration of the new edition hitting consoles let’s check out this ninja stealth ’em up that absolutely has nothing to do with the traditional art of folding paper. Man, was I confused for the first hour.

You are an Aragami, a vengeful shadow spirit summoned at the behest of a woman named Yamiko who is currently trapped by the Kaiho, a group of light-adept fanatics. As the Aragami you are a being of shadow, and thus you have a single night in which to achieve the goals, as the touch of sunlight is deadly. That’s a bit of a problem, though; the various guards you encounter have swords capable of harnessing light and obliterating your shadowy self in a single hit.

The storyline is largely forgettable stuff but does have a few neat ideas and twists along the way. And that’s really all there is to say about it, as it’s not particularly deep nor nuanced. It attempts to build a relationship between Aragami and Yamiko as you play, yet never really succeeds.

This all acts as the backdrop to a fairly standard but excellently executed stealth game where you can opt to sneak past everyone like a ghost or go on a killing rampage. Whatever you choose, though, pure stealth is encouraged since enemies can decimate you with special light swords that are capable of ranged attacks, too. This isn’t to say a corpse being discovered is instant game-over, however, because it’s still very possible to keep out of sight while the guards comb the area, but for the most part this is not a “stealth” game that actually lets you charge in like Rambo.

You’ve got a few special powers hiding up your ninja sleeves to help along the way, each unlockable by spending points which you in turn gather up by grabbing special scrolls spread around the levels, giving you a reason to explore rather than just take the most direct route to the objective possible. The most basic and the most helpful is also one you get for free; an ability to instantly teleport to shadowed areas,  provided you have some Shadow Essence which you can regenerate by simply standing in dark areas where you are practically invisible. On top of that you can also spend Shadow Essence to “paint” an area in shadow, useful for letting you teleport to tricky areas. This simple ability to leap from shadow to shadow is great fun to play with, even though it can be a little fiddly to aim at times and seems overly picky about whether you wanted to climb up to something or just appear in mid-air then fall to the ground in front of a guard. There’s a lot of fun to be gleaned from teleporting right behind a guard before ramming a sword so far through his chest that it might accidentally poke a hole in the space-time continuum.

My personal favorite unlockable power was Shinen, which lets you place a trap on the ground that can be activated with a tap of Y, instantly summoning a black hole of sorts that sucks up any corpses and any hapless guards nearby. It’s great for ambushing a patrol, or for using a dead body to sucker in someone else before removing them from existence. An upgrade to this power also lets you attach the trap to a living person, which is always hilarious.

Of course, you can always combine your powers, too, like using a shadow clone of yourself to attract everyone to your Shinen bomb before cackling with glee as three guards all get sucked into….er, somewhere. The selection of powers you have is fairly limited, but importantly each one feels distinct and useful in its own way, which is always preferable to dozens of entirely pointless upgrades.

These various powers are also limited in that you can only use each of them a few times before needing to reload by visiting a special shrine, although there is a badass Shadow Kill ability you can unlock which will not only helpfully remove a guard from the world but also recharge one of your other skills.

And that’s really it. Aragami’s biggest strength is in how it takes the stealth genre and pares it down to its core elements; you go from shadow to shadow and either kill everyone or aim to sneak by without anyone ever being the wiser. It’s simple and somewhat elegant, just like a katana. And like any good stealth game there are a lot of pleasure to be derived from making it through each of the small yet well-designed areas without ever being spotted. It’s just a shame that your objectives don’t vary much, instead sticking to the simple formula of finding things to break in order to disable a few barriers that are blocking the way.

The thing about katana’s, though, is that they’re actually kind of brittle. Aragami’s strength may be its straightforwardness, but that’s it’s downfall too, because it fails to build upon its own foundation as the relatively short campaign trundles by. Unlocking new powers is fun but doesn’t fundamentally change anything, and neither does some very slight variations in enemy variety. The introduction of archers could, and really should, have been an important moment, their ranged weapons and eagle eyes causing you to stick to the shadows that you had begun to venture from as you became more proficient in the core mechanics. No, instead archers shoot a hugely visible beam of light from the tip of their arrows whenever they aim at a location so that you can easily avoid their gaze, and like the rest of the guards their eyesight really isn’t that good. Likewise, the arrival of mines that spew light doesn’t shake the action up at all.

A good game should follow a nice curve, I think, that dictates difficulty and mechanics. As you progress the challenge should grow, and new gameplay twists and mechanics should be gradually introduced. Now, this isn’t true of every game, but for linear titles it mostly works, and that’s where Aragami falls down. Instead of it becoming more challenging as time goes on – calling on the player to be quicker with their teleports, smarter with their planning – it actually becomes easier because the new abilities give you extra ways to deal with things.

Being spotted also acts as a potential dividing point for stealth fans, depending on whether you like the idea of a stealth game where a lot of the fun is found when things go wrong, or whether you prefer a more purist approach where being discovered is often fatal. Aragami falls into the second camp, giving you a chance to escape and hide if you’re spotted, but at the same time being caught in the open can often spell the end. There are no tools for fighting your way out like you might find in Hitman.

As for the brand new expansion it takes place before the events of Aragami and thus expands the game’s original lore while also introducing two characters to play as, both being functionally identical bar a couple of entryways into the levels.

It’s fair to say that the new content doesn’t seek to radically alter the formula laid down in the original Aragami, and to a point it even strips some of it back, removing quite a few of the powers in favor of giving you just a few set ones without any option to purchase more. On the plus, you do get a couple of new abilities to play with in exchange, including an upgraded version of the kunai that can now be remotely made to explode, a handy little tool that can be used to take out multiple people. There’s also a shadow grenade and a cool mechanic that lets you mark a target to be taken down by the other character, allowing for some fun kills.

Speaking of the second character, multiplayer is again included just as it was in the main game, although now with two characters it makes more sense than in Aragami itself where a second ninja would just turn up with no explanation. Nothing really changes, it’s just now there’s twice the murder potential and twice the potential for your friend or random online player to muck everything up, so then you have to summon an Aragami and send it after them. Life is tough.

So, there are a few tweaks here and there, but for the most part this is just more Aragami, for better or for worse. The fact that both characters are not made up of shadows does allow for a few different environments, but part of me felt that after a few years since the game’s original release it seemed odd for the developers to build something new without making some improvements to original formula or trying a couple of new concepts out.

Graphically as a whole, the game is weak on the purely technical side of things with character models lacking much detail and having frankly horrifying eyes that look like they were painted on, but it saves itself with a lovely artstyle. I was also a huge fan of how Aragami’s cloak is used to indicate your current Shadow Essence, which ability you have equipped and how many uses that ability has left. It’s a superb piece of U.I. design that carries over to the new expansion as well.

As for the audio, it’s a little more mixed. There’s backing music by Two Feathers that is absolutely great, feeling both traditional and modern at the same time with relaxing strings and even some moments of heavy drums. The same artists return for the expansion, and thus once again the music is excellent. Everything else is mostly just passable with an okay audio mix, although it’s not great at letting you pinpoint things purely by sound.

Aragami certainly has a few key flaws that hold it back from being the perfect assassin, but this is ultimately still a stealth title that fans of the genre should give a shot, unless you happen to prefer more freedom when crap hits the fan. The new expansion doesn’t bring anything truly exciting to the table, but it does provide more of an already good thing and tightens the experience up in a couple of areas.