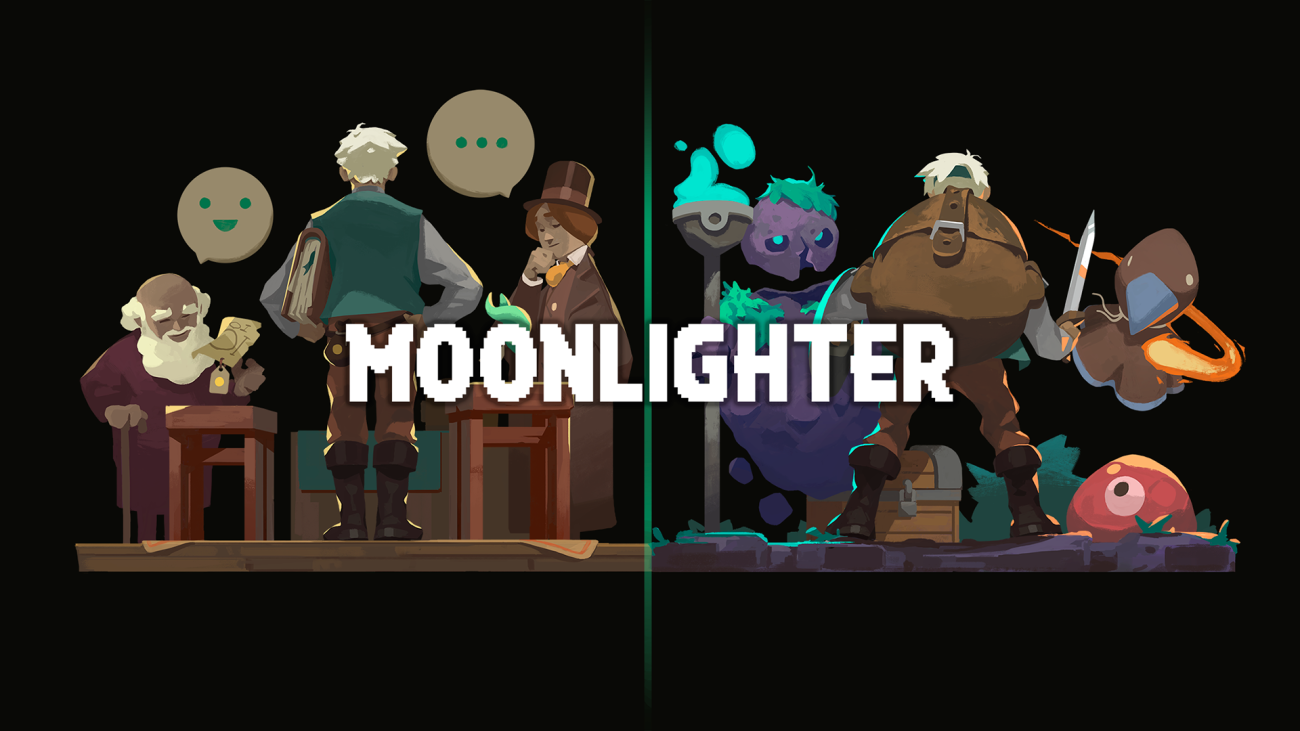 Did you ever wonder how the shops in RPG games so often stock amazing, unique weapons? Where do they keep getting them from? A number of games have sought to put you into the shoes of the shopkeepers, selling items to adventurers who will run off to fight strange beasts rather having YOU be the one to do all the adventuring. Moonlighter wants you to do both, though, explaining that the reason shops have these amazing items is because the people who run them are adventurers, too.

By day Will is a humble shopkeeper looking to sell his wares for the best price possible to customers looking for interesting items. But by night Will moonlights (HA!) as an adventurer, delving into the mysterious dungeons in order to acquire new loot to sell in his shop while also trying to unlock the fifth door, done by beating the giant boss at the bottom of the other four dungeons. The dungeons in question apparently just appeared one day, each one containing exactly three levels that get randomized every time you step inside. The game is light on story but you do get some intriguing exposition behind what the dungeon actually is, and why it seems to want people to claim its treasures.

More importantly, each dungeon is home to enemies and chests, and both of those things grant you loot in the form of all manner of things like magnetic cores, soldering irons, hardened steel, books and more. Combat is kept simple with a single attack button, two swappable weapons and a dodge that will let you safely dive through any attack. There are a bunch of enemy types and learning each of their behaviors and patterns is how you get through the dungeons with your limbs still intact. Fighting mostly just feels okay, some dodgy hitboxes sometimes resulting in hits or misses that can annoy you but a nice rhythm that takes a little bit of getting used to.

Other than just getting your backside beaten there is two ways to leave a dungeon; the pendant lets you pay a relatively small cost in gold to immediately warp back home, losing your progress in the dungeon but keeping all of your hard-earned loot so that you can sell it. If you happen to go delving into the depths without enough cash you also get a special mirror where you can dump items which get magically turned into money, though you’ll get a lot less than the items are actually worth. The second option for ditching out is to summon a portal that will allow you to re-enter the dungeon where you left, but it is much more expensive. Still, provided you’ve got some solid loot you can portal out and still make a tidy profit before jumping back in.

Speaking of the loot we really need to chat about how carrying all that loot works, because Moonlighter has an intriguing inventory management mechanic that forces you to consider what you want to take. Firstly, you’ve got fairly limited space, with a row of five slots at the very top being stuff you keep on your person and thus will be kept even if you’re defeated, and then another fifteen spaces in your rucksack for everything else. The key is that almost all of the items you pick up from chests have special curses on them. Some are handy, like sending the item to the left back to your shop instantly, while others will destroy the loot directly above it. Others will break if you take too many hits, or convert other items. Some still need to be placed on the sides, top or bottom of your inventory.

This constant managing of your space does sometimes interrupt the flow of a dungeon since you have to frequently stop and move things around or choose what things need to get tossed into the mirror, but it also helps bring a fun little puzzle to your adventuring and serves to break up the constant battling of enemies which can get kind of tiresome after a while.

Once you get back home you can take your loot and place it on shelves in your store, ready for sale to the general public. To be successful you need to figure out how much each thing is worth, and to do that you need to set an initial price and then keep an eye on customers as they examine it. A little emoticon will pop up above the customer that shows how they feel about the price, like a grinning face with gold eyes which means you’re not charging enough or a frown which means they’ll buy the item but it is too expensive so it will take longer to find a buyer. There’s also a very basic supply and demand system working away in the background, too, so if you flood the market with too much of one item the value will drop, likewise rare items get increased value. It’s surprisingly satisfying to run your little shop, finding the right prices and dealing with the occasional thief who wanders in.

All this cash can be spent in a few ways. Using materials looted in the dungeon and some money you can purchase new gear from a limited selection of armor and weapons, and the game even includes a handy wish-list system that will mark required materials so that you don’t accidentally sell ’em in the shop.

You can also invest some of your cash in helping to open five new businesses in the town, including a blacksmith so you can get that aforementioned new gear, an alchemist who’ll brew up some health potions and even a banker. A little oddly, however, only the blacksmith and the alchemist feel particularly useful, with the other three just being something to spend your money on but hardly invaluable.

Another option is to pour cash back into your shop. Major upgrades open up more floor space with slots for selling, as well as special showcases that can be used to overprice items to be sold to rich customers with more cash than sense. You can also pick up fancier cash registers that somehow persuade customers to leave a generous tip, special sale bins and even a better bed that provides a health boost. Much like the weapons and the businesses you can invest in there is not a slew of choices, but it’s still nice to see your shop grow over time.

And that’s all there is to Moonlighter. It’s far from a complex game, yet it’s straightforward gameplay loop of fight, loot, sell is incredibly addictive. Of course, it helps that it has a charming look and some great music that evokes the days of exploring towns on an N64.

There are a few technical bugs here and there to contend with, though, including some odd framerates drops on a standard Xbox One that just shouldn’t exist considering how undemanding the game actually is. I also had quite a few cases of enemies getting stuck, including a boss being unable to escape from a wall, granting me an easy kill.

None of the problems were anything other than annoying, though. Admittedly, it’s a small game that doesn’t have a lot of systems colliding so bugs like that shouldn’t really exist, but it’s nothing an update can’t iron out. And what you’re getting is an extremely fun little game with an addictive core gameplay loop. Who knew running a shop could be so damn satisfying? But it really is, watching all that cash pouring in from the sale of all the loot you fought to gather up eliciting a nice, tingly feeling.