At some point, while I was hurtling down a road with the front sawblade of my bike merrily spinning away, I began to idly wonder how much of a jerk I was being. I mean, surely with that spinning sawblade of doom attached to the wheel the street must be getting torn to pieces, right? Admittedly there is something of an apocalypse going on in the background so a little extra damage isn’t the end of the world, but somebody is going to have to clean it all up. Ah well, such are the harsh realities of 2.5D motorcycling, I suppose.

You’ll play as the titular Street Rats in the steampunk-ish Coastal City where a strange invasion of robots made entirely of junk (and creatively named Junkbots) is taking place. Its up to the rag-tag Rats and their trusty motorbikes to venture out into the world and save the day by riding everywhere. It’s a schlocky B-movie style plot that even manages to fit in those buzzsaw tyres I mentioned earlier. 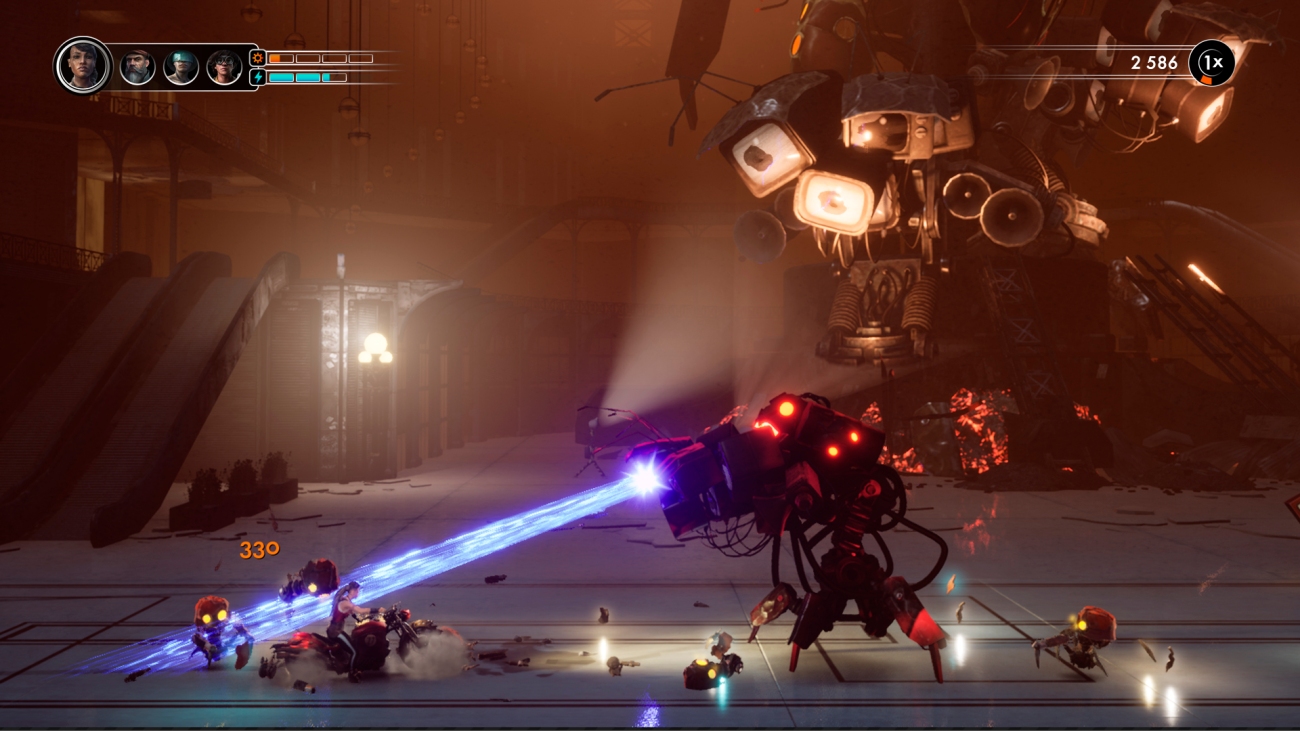 Toshi, James, Lisa and Randy are the four people who make up the Steel Rats gang, and apparently, they own the streets and rooftops of Coastal City, which is a tad strange because they seem to be genuinely decent folk yet the description of how they own the city seems to contrast that. But tossing that aside we get chunks of storyline delivered through short cutscenes at the start of each of the four chapters, plus dialogue between the Steel Rats during levels and even the occasional bit of news via occasional radio bursts. It’s stuff for the most part that you’ll forget almost instantly, and the four members of the gang are given only the broadest of strokes; Toshi is the smart kid, Lisa is the fiery chick, Randy is the weird one and James is the gruff leader.

You can get some extra story beats by finding secrets within the levels that unlock narration by the Steel Rats or other things that actually flesh everything out a lot more than the main storyline itself. I kind of wish these were just in the story rather than something to be found.

But that’s okay because we’re just here for the bikes, baby! Initially, you might almost think you’re playing a Trials game as you drive along from left to right over jumps and other nonsense, but it quickly becomes apparent that this is quite different. The physics, for one, are surprisingly light considering you’re driving a chopper as you’re able to balance on your front or rear wheel while standing still without ever touching the throttle or brake. More importantly, the bikes here are combat ready thanks to the deployable buzzsaws attached to the front wheel that let them rip through enemies and even climb certain walls and ceilings.

More things get layered on top of this, starting with the fact that each of the four characters, whom you can swap between on the fly, have their own special ability such as Toshi’s helpful robot pal who will fire off electric bolts, or Randy’s harpoons. You can also launch an ultimate version of each character’s attack, spin your bike around to deflect projectiles or just to turn around, jump your bike, perform a dash on land or in the air and even perform a charge-up attach which awkwardly requires you to hold R1 while also trying to use the throttle on R2.

Yes, combat plays a big role with a variety of Junkbots standing in your way, from the pesky little guys who you can mow down with ease to larger types that swing on the ceiling or simply try to gun you down. Frequently you get locked into a small area, too, and can’t leave until you wipe everything out.

Yup, that does bring us to one of Steel Rats biggest problems; the controls. Things start off fine, but as the levels introduce more enemies and tricky navigation the control scheme begins to shows its true colours as an unintuitive beast. You can get used to it over time and figure out how to manipulate your fingers, but it never feels comfortable or natural and with no customisation options, at least on the PS4, you’re stuck dealing with it. During busy platforming sections or where there are numerous enemies to deal with it’s so easy to wind up spinning around twice or completely missing things.

You’ll be driving side to side along a 2.5D plane, meaning that while moving the stick left and right adjusts your bike’s balance, moving it up or down will move you between the three lanes that make up the environment, although these lanes are not defined by any markings. In fact, I often felt like I was fighting against the game as switching lanes is not smooth and depth perception when it comes to enemy position and precise driving feels off and difficult to judge. It gets harder when you’re in the middle of the more complex platforming or fighting enemies as it’s so easy to misjudge where a robot is or to wind up getting caught up on scenery while you’re also combatting the controls.

I also encountered a lot of moments where the game’s physics would seem to go bonkers and send me spinning around or even driving off the edge of something. Several times when going up the vertical walls I’d find myself turning left or right for no apparent reason, and other times the bike got caught on scenery while turning and got confused with what it was doing. The worst moment was during an otherwise enjoyable enough escape sequence where you go charging upwards to get away from a giant robot, but one section where you had to make a quick turn then drive vertically consistently threw me off to the side. My only guess is the game hadn’t registered the turn command as fully finished before I was heading up the vertical metal section.

I’d also say that Steel Rats can’t quite decide on where it wants to focus its energy. The bikes you drive are fast beasts, even more so when you hold down the button which activates your ripsaw since that gives you a boost. The sense of speed is terrific and it feels like the game wants you to go fast, to play it like a faster version of the Trials series with a few enemies here or there, but as you progress you realise that game actually wants you to slow down a lot in order to deal with areas packed with junk bots or sometimes even because it has decided to throw a strange bit into an otherwise nice and flowing section That requires you to slam on the brakes.

What I’m basically saying here is that there were times when Steel Rats was immensely frustrating and I often felt like I had to slow down, not because of my own failures but because of the controls. Going too fast resulted in problems, yet the mechanics always felt like they were pushing me toward speed. Fighting off enemies I always felt like I was a lumbering tank rather than an agile bike.

But there’s some revvy goodness to be found here when things manage to click. There were some sections where the game blended nice, fun platforming and flowing sections with sparing use of enemies to create something really enjoyable. And while the levels are sometimes a bit boring to look at there were also a few smatterings of interesting areas that hint at a cool world. 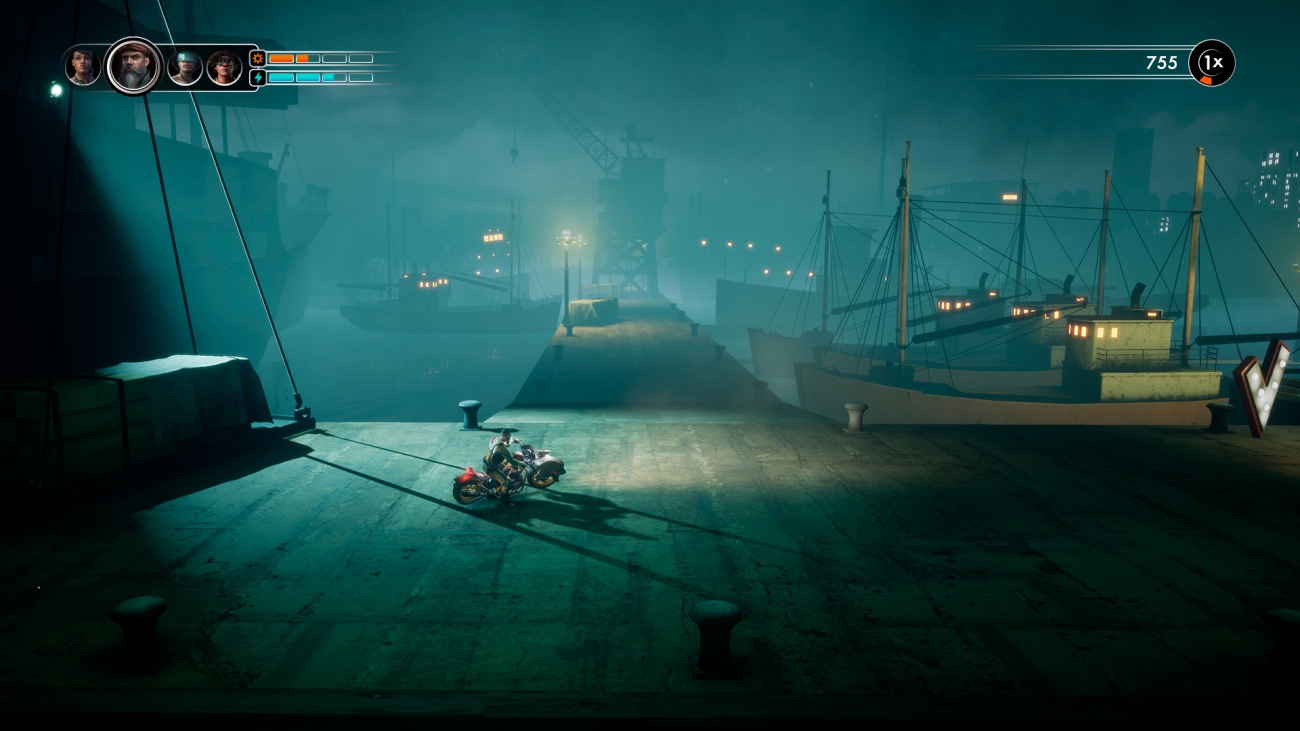 As you drive, batter and shoot your way through the 28 levels (which will take about 4-6 hours) you’ll be earning Junk that can be spent on upgrades for the four characters as well as a small selection of skins for them and their bikes. The economy is essentially broken, though, as you’ll be showered with more Junk than you could possibly ever need. On the final level of the game I had unlocked everything for each character and still had about 150,000 junk leftover. This means you’ll never face a tough decision about what to unlock as you go, but then again even if the economy was fixed the upgrades themselves wouldn’t make for very interesting decisions. You unlock them one by one as you move through the levels, a slow drip-feed of pre-determined upgrades that you can always afford to buy. It makes the whole system pointless since you may as well just be given them for free as you progress.

Oh, Steel Rats. Your mad-cap ideas and your heroes who presumably sleep on their bikes, eat with their bikes and go to the toilet on their bikes are so very cool. I wanted you to be amazing, to be the brilliant video game equivalent of a wonderfully cheesy B-movie with such a daft premise that you can’t help but like it. However, I feel like more time needed to be spent working on the controls, both in terms of their layout and in their execution. It could also have done with deciding whether it wanted to be fast and fluid or more cautious because right now it’s conflicted, and often slams on the brakes so that you can fight some enemies. But for the relatively cheap price of £15 you do get fun little game with some interesting ideas.