One thing you sure do get with the Darksiders series is variety: the first game took heavy inspiration from the Zelda franchise, whilst the second favoured lots of loot and a bigger world. The third game had a little bit of Dark Souls floating around in it, as well as a dash of the Metroidvania genre. And now we’ve got Darksiders: Genesis, a prequel that pulls the camera way out into a top-down view and throws in a few dollops of Diablo for good measure. That’s four games and four very different styles. Talk about bang for your buck, eh?

The tale of the Darksiders franchise is one fraught in peril. The first game drew many comparisons to the likes of Zelda but still managed to carve out its own niche thanks to the intriguing world and story which saw War, one of the four Horsemen of the Apocolypse, accused of starting the end of the world before its proper time. The sequel followed War’s brother Death and introduced a host of new mechanics that included mountains of loot, a horse and wide, open areas and I adored it. But then tragedy hit as publisher THQ went under and the Darksiders franchise was seemingly lost. Salvation appeared, though, as the Darksiders name was bought alongside a bunch of other IPs by who then gathered up a bunch of the original Darksider’s developers and with them forged Gunfire Studios, and so after 4-years and a lot of doubt we finally get the sequel we’ve all been waiting for. But was it worth the wait? Read on to find out, dear folk. *dun dun DUN!*

One of the team from Nordic Games, the company than acquired the rights and most of the developers of the Darksiders franchise, have commented on Steam about the possibility of a true sequel. To their credit Nordic have been very activate on the Steam forums, chatting with fans […] 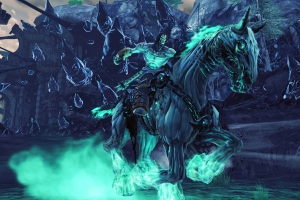 Darksiders 2 Coming To Xbox One And PS4 In Deathinitive Edition

Darksiders 2 is due to hit both Xbox One and PS4 in an imaginately titled Deathinitive Edition, which will include rebalancing, all previously released DLC and spruced up graphics running at 1080p. This re-release will be handled by Gunfire Games, a team made up almost entirely of ex-Vigil staff, […]

Don’t Expect To See Darksiders 3 In The Next 2-Years, Says Reinhard Pollice Of Nordic Games

In April of this year Nordic Games spent $5-million to acquire a vast number of THQ’s IPs, and while they’ve yet to really lay the foundations for their plans going forward, Reinhard Pollice, who handles Nordic’s business and product development, did reveal some interesting snippets of information regarding what […]

Nordic Say No Darksiders Game This Year, Because They Don’t Believe In Bringing Out Sh*t Sequels.

Nordic games, the publishers who bought the vast majority of THQ’s remaining assets in the final auction, have earned some serious respect points from me thanks to their comments to Game Informer. Speaking to Game Informer Nordic CEO Lars Wingefors was first all very honest about his company and […]

The results for the auctioning of THQ’s remaining assets are finally in, allowing us to see exactly who bought what, and in something of a surprise is seems that Nordic Games, assuming the court approves all sales, will be riding off into the sunset with the vast majority […]

When THQ sadly died earlier this year the fate of both the Darksiders franchise and its creators, Vigil Games, looked bleak. No bids were placed on either the game or the developers, and so Vigil Games shut down and the Darksiders IP seemingly died alongside them. But now […]

Yesterday came the utterly crap news that nobody had placed a bid on Vigil Games, the creators of the Darksiders games,  during the auction held for THQ’s various assets. Many of the staff of Vigil headed on to the Internet to say their farewells, with Ben Pureton posting […]

Platforms: PC, Playstation 3, Xbox 360 (Reviewed) Release Date: Out Now! Developer: Vigil Publisher: THQ Singleplayer: Yes Splitscreen: No Multiplayer: No PEGI: 16 This game was provided by THQ for review. The original Darksiders was a game almost literally brimming with promise and potential, an action-adventure game that cherry-picked […]