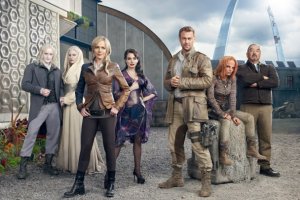 If nothing else Trion Worlds deserve kudos for attempting something very different, a blending of videogame and TV show to try and create one world wherein the events of either medium can affect the other. The result of this mad experiment was Defiance, a third-person  shooter in MMO […]

Release Date: Out now! Developer: Telltale Games Publisher: Activision Singleplayer: Yes Local Co-op/Co-op: Yes. 2 Players Online Multiplayer/ Co-op: No. PEGI: 7+ LEGO games get around a fair bit, don’t they? But it’s been a while since I’ve played one (LEGO Harry Potter being the last) and that […]

It’s no secret that Gears of War stands next to Halo as the Xbox’s flagship game series, it’s name is famous around the globe and it seems that Microsoft is keen to make the most of that name. With Gears of War 3 coming this year gamers are […]

Crackdown 2 get’s a fantastic new trailer that shows off new abilities and tricks. will you blow it up with me? http://www.gametrailers.com/video/crackdown-2-spike-tv/59928

The Prince of Persia returns in this new game,going back to the original storyline and gameplay. http://www.gametrailers.com/video/prince-of-spike-tv/59825

after an extended absence the Medal of Honor series is set to return and bring the fight to the Call of Duty series. http://www.gametrailers.com/video/medal-of-spike-tv/59827 Set in modern day,it’s taking COD head on,on it’s own turf.

If you have read my review then you know Batman: Arkham Asylum was a game that I loved,and today we have learned that there is a sequel. Gotham city is being destroyed by the Jokers henchmen in this fantastic trailer. http://www.youtube.com/watch?v=U4sCbJmXwZc&feature=player_embedded It looks as though the new game […]

As all you Halo fans gear up for Halo Reach,perhaps you would like a sneak peak? http://www.youtube.com/watch?v=ZB8tFgqmPwI The brand new trailer shows no gameplay,just cinematics which is slightly dissapointing. The quality on this video is fairly decent,but it’s also the first video of the trailer out there.