Do Us A Favor And Help Out Rawr Audio! 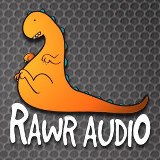 As many of you guys and gals already know I occasionally like to post up videos and updates on a friend of mine, a musician by the name of Geoff Sharp, who writes and performs all of his own stuff. And even if you missed those updates you could hardly miss the fact that there’s a link to his site on the sidebar and an information page about him and his music on the top bar as well. The reason for my support isn’t just because he’s a friend, but because a) he’s a proper musician that plays, writes and records everything he does himself, b) he’s bloody good at, and c) because he’s trying to live his dream in a world where that’s becoming increasingly harder.

Performing his own music isn’t the only part of his master plan, mind you. You see,  in between writing stuff for his second album (His first album is epic, by the way) he decided to go back to college and take up the noble profession of sound engineering so that he could open up his very own recording studio!  He’d already been doing a lot of the work the college course demanded through his years of working with bands and from recording his first album, but hey, these days you’ve got to have a piece of paper for everything. The end result is that he’s just officially opened up his own studio for business. Named Rawr Audio it’s currently just a small operation, but over time it’ll grow. He aims to create a recording studio with affordable prices so that bands with little cash have a real shot at making a professionally produced album, so that us music lovers can discover even more talent.

Alright, so enough of the sales pitch and the fanfare, what’s this post all about? Simple, really: Geoff has just yesterday, at the time of writing this, set up the Facebook page for Rawr Audio, and so what I’m asking is that you take just a few minutes to wander over there and click the Like button, that’s it:
https://www.facebook.com/pages/Rawr-Audio/257294781065686?fref=ts

But wait, I have no interest in getting anything recorded, you cry! Well, even if you don’t I ask you to click the Like button anyway, because doing so helps Geoff out massively in getting the name of Rawr Audio out there. Think of it this way: you lose nothing by clicking that button, but it could help Geoff live out his dream, so why not do it? What reason could you have not to? Perhaps by clicking the Like button somebody you do know who is interested might discover Rawr Audio, and in the process both that person and Geoff could end up as massive names within the industry, just because of the click of a button. Yeah, that sounds a bit mushy, but it’s damn well true!

Regardless of whether or not you bother to visit Rawr Audio,  thank you for taking the time to read this and, as always, a big thanks to everyone that reads this site. It just keeps getting bigger!

Now, back to the games! Yup, a Far Cry 3 review will be coming, as will a review of the latest Skyrim DLC, Dragonborn. Oh, and I might take a shot at reviewing Halo 4 as well.

And just to round off this post just go ahead and also pop in and took a look at Geoff Sharp’s official page: http://www.gsharponline.co.uk/

Then take a listen to one of Geoff’s tracks. If you like it, consider buying a few tracks seperately from his website or, even better, just buy the whole album! Keep in mind that every instrument on the album is played by Geoff: