HABA games have been slowly augmenting their slew of kids games with more family orientated titles that can be enjoyed by young and old alike. Last time I checked out their simple yet effective push your luck dice game Spookies. This time we’re continuing the theme of simplicity with Karuba, and elegantly designed tile-laying game that surprised me with just how addictive it becomes.

The premise is a simple one; a team of adventurers gets dropped off on the beach of a mysterious island and set off through the thick jungle to hunt for treasure, their ultimate goal being to hack through the dense foliage so that they can ransack ancient temples, all in the name of fortune and glory (hint, hint at future review.) To do this you’re going to lay down tiles on a grid o form paths in a fast-paced strategy game, racing against other players to snag the loot first. The faster you get there the more points you earn. Simple.

Setup is a breeze; each player is given their own board that will be used to control their expedition. They’re also given a set of four temples and four adventurers, and players take turns choosing where these will be placed, with temples along the top and right jungle areas, and adventurers on the left and bottom beach zones. When a location is decided upon all players must place their respective color of temple and adventurer on the same location on their board, thus everybody starts with an identical layout. The only limitation when setting up the pieces is that temples and adventurers of the same color must have at least three spaces between them. After that the plastic diamonds and chunks of gold are put in the centre of the table where everybody can easily reach them, and the cardboard temple treasures are also laid out within reach. Finally there are the tiles; each player gets 36 of these tiles that have pictures of trails on them, from simple straight lines to corners to the valuable crossroads that can join your network of trails together. One player takes his or her set of tiles and shuffles them up so they’re nice and randomized, and then creates a draw pile next to their board. All the other players take their tiles and lay them out around their board in order based on the number displayed on them.

A round begins with the player who has the stack/s of tiles in front of them drawing one from the pile. Once the first player has drawn a tile they call out the number the other players then look for the matching digit in their supply so that everyone is holding the same square of card, at which point they have a choice to make; either they can lay the tile down on their board in a bid to forge paths to the temples, or they can spend the tile to move along already created paths, battling through the dense jungle to find treasure.

When placing a title the only rules are that it must be placed onto a free space on the board, and the number must always be on the top left-hand side, so you can’t rotate tiles, forcing you to work with whatever you’ve been given. The goal is to create a path so that each adventurer may reach their correspondingly colored temple, with junctions allowing them to change direction. Thus a blue adventurer must head for the blue temple, and so on. The catch is that whomever gets to a temple first snags the full five points, while slower players earn less, all the way down to just two points, with the spread being based on how many people are sitting around the table. A two player game, for example,  uses the 5 point and 3 point treasures.

It’s a frantic race, then, to reach the temples first and score the biggest haul. To move your small squad of adventurers you need to spend a tile rather than choosing to place it on the board, at which point you count how many exits that tile has on it and move one adventurer that many spaces forward, obviously following the paths you’ve crafted. You don’t need to use all the movement points, though, so you can just walk forward a single tile if you wish. But why would you ever do that? Why waste valuable movement if you’re racing every other player at the table? The answer, of course, is sweet, sweet loot! Many of the tiles have a picture of either a diamond or a chunk of gold on them and when they’re placed on the board a physical plastic diamond or piece of gold is put on top of it. Diamonds are worth one point and gold two, but they can only be collected when you end your move on the tile, so to pick them you might have to forgo advancing toward a temple at full speed.

Karuba strikes that beautiful balance between being simple to learn thanks to its straightforward mechanics while also giving the player plenty of important decisions to make along the way. A game of Karuba frequently starts very similar with players placing down their tiles in almost identical spaces, but strategies quickly diverge as folk begin to prioritize differently. One might begin building an elegant web of paths designed to ensure they make it to all four temples while snagging a few diamonds and hunks of gold along the way,  carefully judging where they think crossroads and other tile types need to go on the board. The player across the table, though, might decide to simply make a dash for one or two temples using the most direct route possible, only vaguely considering the need for other trails later on in the game. This mad dash, though, might make the first player reconsider their own strategy as they worry about losing those early points and might adopt a more straight line approach as well, racing for those targeted temples, or maybe they’ll change tactics and start heading for the other temples to secure those, or perhaps they’ll just continue with their more thoughtful approach, thinking that making sure they can snag treasure from all the temples will pay off better than just racing for one or two and potentially screwing themselves in the process. You might think that boxing yourself in or somehow making it some one or more adventurers can’t access their respective temples would be an act of supreme stupidity, and you’d be absolutely correct, yet somehow it’s surprisingly easy to do in the heat of the game as you get caught up in placing a piece that helps one path but that leaves you frantically building a huge detour for another or leaving you stuck altogether. Tactics continue to change as some folk move their characters early and others wait. Some people like to build their paths by connecting one tile to another, while other players piece theirs together more haphazardly. Some will sacrifice speed to grab diamonds and gold, and others will just run for the temples. There’s a lot of flexibility within Karuba which stops it from becoming repetitive, as does the very fast playtime. Even when you’re waiting for other players to place their tiles you can be considering your board and analysing theirs, and a single game usually only lasts 20-40 minutes.

And that makes it downright addictive. Tiles are placed onto the board with a satisfying click that stems from the quality card, and with the game moving along at such a brisk pace it was perfect for a light evening’s entertainment. Kids and adults alike seemed to love it, too, easily grasping the rules and setting to work solving their own little puzzle. Which is exactly what Karuba is; it’s light on actual player interaction, rather it’s all about solving the puzzle set out before you, using the random pieces you acquire to slowly build a path toward victory. The race going on between players is what keeps things intense, but you do have to be careful that people don’t become too absorbed as you’ll find folk hunkering down over their board and the table going silent, only the occasional grunt of frustrating to be heard amid the furtive glances at other boards to see who is doing what. It’s like playing a solo game at a table with people playing the exact same solo game, so you do need to work a little to keep conversation flowing.

That doesn’t hurt this truly excellent title, however. It’s genius is its sublime simplicity; there’s just two things to ever consider, whether you should play a tile or ditch it to move a guy. That’s it. It can be taught so quickly, and yet from this very basic set of rules stems a continuous stream of decisions for the players to make that feel important. Every match feels different depending on the chosen layout of temples and adventurers, and the drawing order of the tiles, and watching how everyone tackles solving the puzzle is a pleasure. 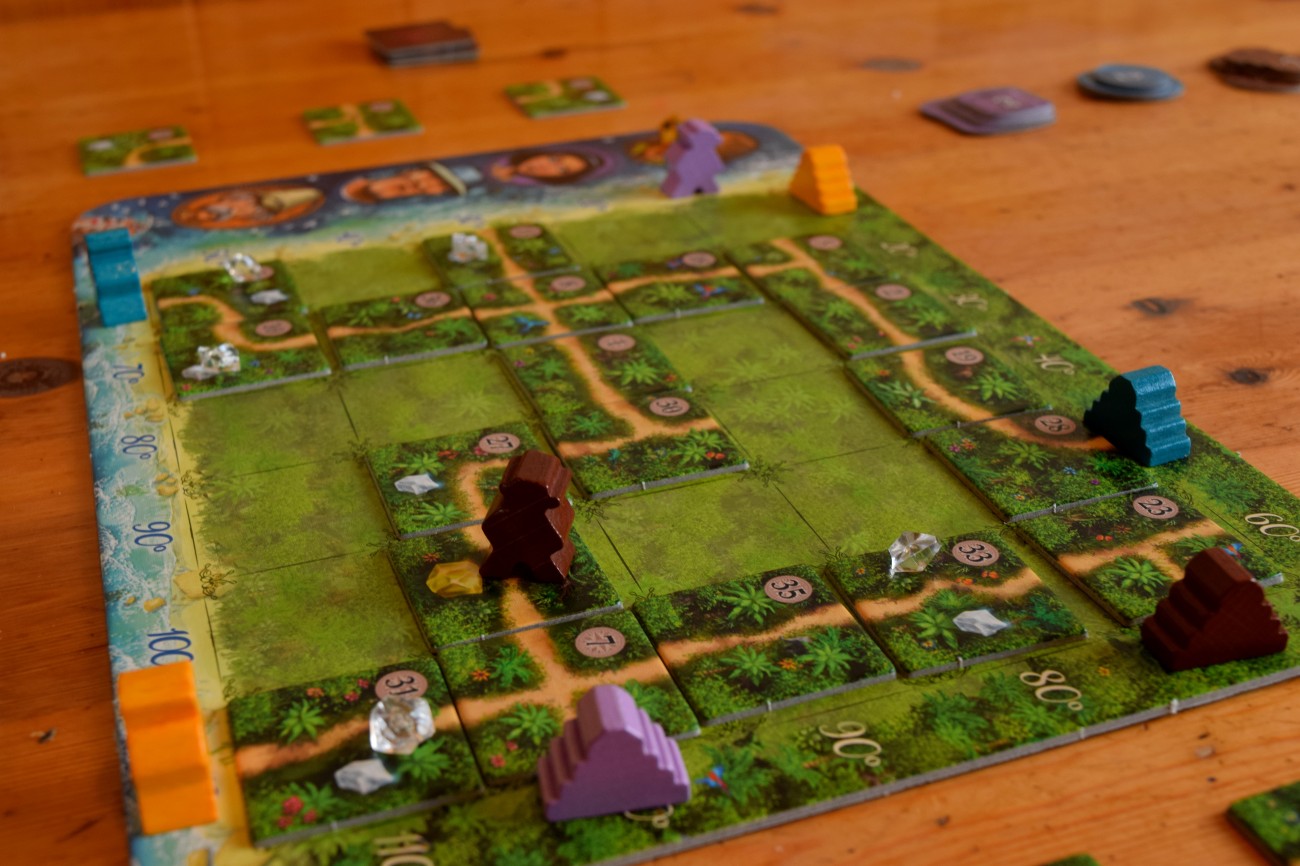 The game ends when everyone has successfully made it to a temple, or when the 36 tiles run out, creating a ticking clock that must always be heeded. Numerous times I witness other players, and indeed myself, essentially run out of time, forcing us to make a dash with a few adventurers and accept that other ones weren’t going to make it in time. This stemmed from failing to play well earlier by spending tiles that weren’t absolutely vital to move. This encourages better forward planning and carefully keeping an eye on how many tiles are left and what sort of paths they offer.

To my surprise the also got the coveted Mum Seal of Approval. My mother is hardly a big board gamer, but she took to Karuba like a fish to water, the puzzle element appealing to her love of point and click videogames. Complementing that award is my Niece’s Seal of Approval, too, as she found it easy to learn and enjoyed playing it, even if attempting to plan out routes was a tad difficulty for her 7-year old mind to cope with at times. This just goes to prove that HABA have succeeded in making a perfect family game in Karuba, something which everyone can enjoy sitting around the table and playing.

The components are also absolutely solid. The artwork is a little generic, but the player boards are made of a pleasingly thick card, as are the tiles, which get placed down with an incredibly satisfying click. The tokens are thick too, and the physical diamonds and chunks of gold are a nice touch. Finally the temples and adventurers are all made of wood, and like the tiles have a satisfying click when being placed on the board. Never underestimate the power of a simple, satisfying little sound like that.

With almost no problems to speak of it and such glowing praise is it any wonder that I’m more than willing to whack a full recommendation at the end of this review? Nope. Karuba truly is a gem of a game and has become a fast favorite among my family. It is elegantly designed, easy to learn and yet pleasingly cerebral without being stressful or overly challenging. It’s the perfect balance, really, and I have no doubt you’ll love it, too.