The Call Up Review – Call It Back Down, Please 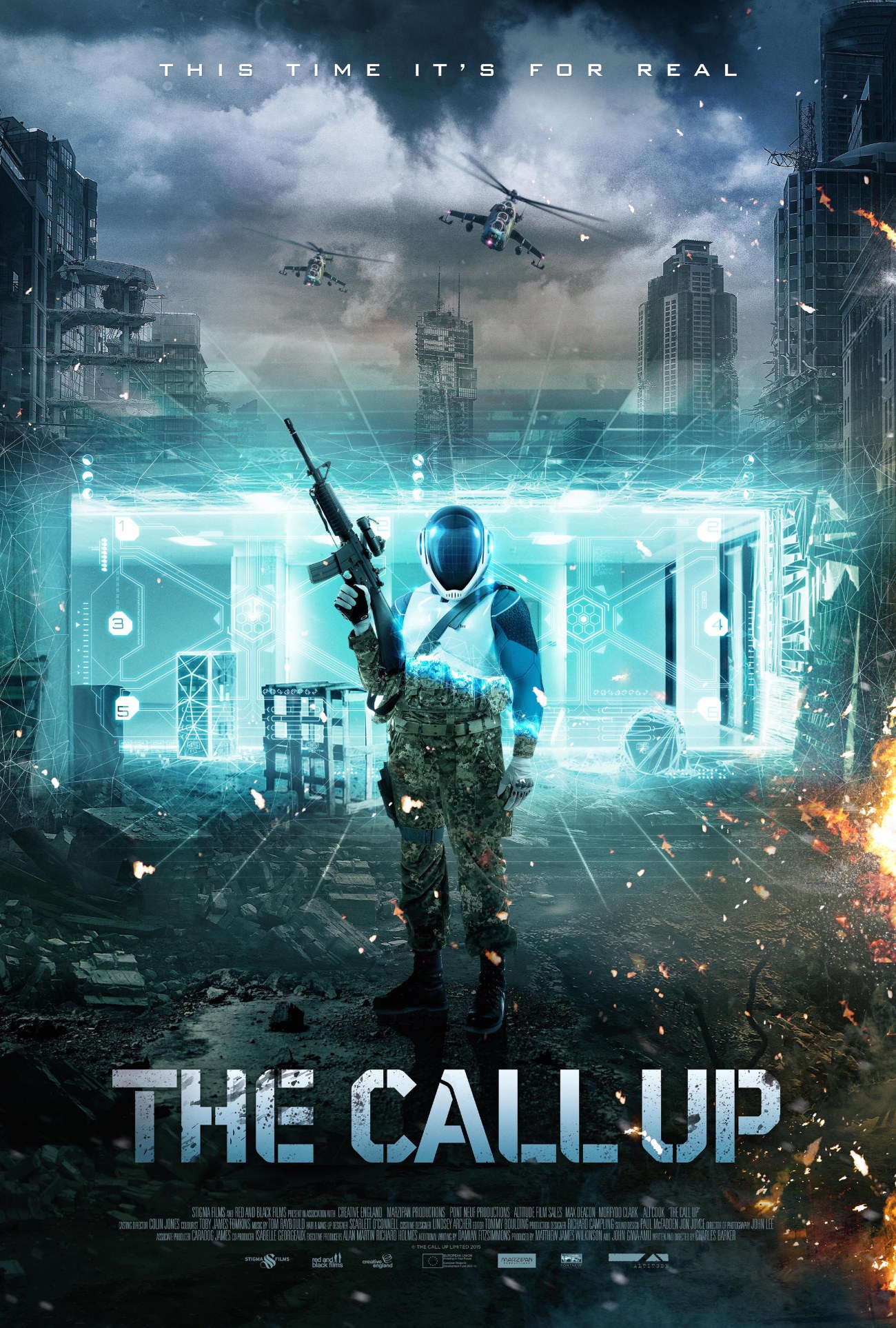 I’m something of a movie fan, a side of my personality I don’t typically display too often here on the site. But when a company Emailed me asking if I wanted to review their new movie which featured a gamer vibe thanks to the inclusion of virtual reality I couldn’t really say no.  With virtual reality making its way into our living rooms The Call Up presents a fun premise for an action movie; a bunch of gamers are invited to test out the cutting edge of VR technology in the form of white suits which transform the environment around you into a battlefield and provide realistic feedback. It’s the ultimate videogame, and its a task only made all the sweeter by the promise of a cash prize for whomever finishes with the highest score.

Often to me the indication of a good movie is how much about the characters I remember at the end. Thus the fact that mere minutes after the credits had rolled I could not remember the character’s names or clearly define who they were as people was not a good sign. This is a nearly instantly forgettable movie that wastes its fun premise from the very beginning, wasting a surprisingly reasonable cast of relatively unknown actors. As the debut of director Charles Barker it does at least suggest that he might have a good career ahead of him. Despite its mediocrity it is by no means a terrible film or something that I hated watching. Hardly glowing praise, but there we are. It just…it….it exists. It’s there. 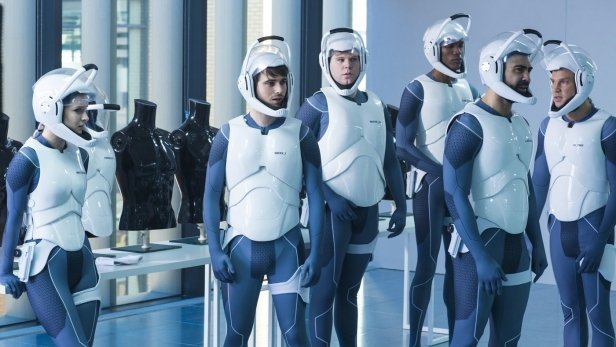 Arriving at a seemingly abandoned building our group of intrepid heroes are kitted out in white armor with a helmet that incorporates a VR vistor, turning the clean, white interior into a warzone. To provide a realistic experience the suit is capable of producing stimuli so that getting shot will hurt a little. Even the plastic guns that they carry feel utterly real as feedback is recreated perfectly, making the presence of an ex-military guy, as played by Parker Sawyers, very useful since he can provide some tips to the rest of the group to get them up to speed. Given 25 levels to progress through the group is told to simply make it to the bottom floor where the user with the highest score will walk away with the prize money.

So let’s get down to tearing this movie apart and seeing what makes it all tick, eh? Things don’t get off to a good start as we’re introduced to our group of protagonists who all blend together into one giant personality lacking blob of flesh that meanders through the building. Some of them get the merest hints of basic archetypes; there’s a slightly overweight guy who is the real geek of the group, the only one that seemingly understands the tech behind their suits; there’s the severe wuss who goes through a horribly executed arc, and there’s the resident jerk whose inevitable decisions (that you see coming a mile off) make absolutely no sense when you stop to consider.  There are a few others that round out the numbers, too, but somehow they are even more forgettable than the rest. It says something that even while watching the film I struggled to remember the names of the various people, which naturally doesn’t help create a sense of tension. Still, the cast themselves are clearly attempting to make the best of the very little they’re given. Charles Barker might not give them much meat to sink their teeth into, but there’s no truly weak performance among the group, aside from perhaps a few moments of over-the-top screaming. Of course, I can’t in all honesty say that there was any good performances, either. This is a group of mostly unknown actors who have a lot to learn yet. I look forward to seeing them in more movies, however.

Of course a bunch of folk going around shooting virtual enemies wouldn’t be very interesting. Suspicions are quickly raised as it becomes apparent that the gear can’t be removed and the doors are locked, so nobody can quit. One individual begins freaking out over his “ironic” gamertag Terrorist being printed on the suit, and demands to leave, only to be confronted by the game’s Sargent, a recurring character who pops up to deliver verbal and physical beatdowns when the players attempt to escape. Attempting to remove the suit through force quickly proves to be a bad idea. Meanwhile the first wave of bad guys that come charging through the door reveal that getting shot is a painful experience, and potentially fatal as the suit’s helmet contains a device which can emit sonic pulses that kill the wearer. The only buffers the group have are vests that offer protection from a single hit before vanishing, and a very limited supply of medi-packs that will instantly heal any wound. Thus we have our narrative; 25 floors of enemies to shoot with the possibility of death around every corner and one burning question; what the hell is going on? It’s gaming gone wrong, and no I’m not referring to EA’s incredibly boring E3 press conference.

It sounds pretty awesome on paper, mixing a little bit of The Raid with a touch of sci-fi. This gives the film an interesting tonal mixture. It’s ostensibly an action flick, but truth be told it shares more in common with a badly executed slasher film. You’ve got a bunch of brainless buffoons who are never fleshed out, and throughout the movie they’ll be killed off one by one. As an action film it’s dull, since none of the combat scenes do anything interesting or pack much of a wallop. Every battle involves a few camera shots of gunfire being traded across a bland environment, with no sense of danger or urgency. The near constant background music, lack of relatable characters and lackluster direction also does its very best to ensure that no sense of tension ever manages to slip into the film, which renders it useless as a slasher, either. Nor are there any of fun, over-the-top kills. Without characters to give a damn about actions scenes flounder, there’s no biting of nails as you wait for another character to be murdered. That doesn’t really leave The Call Up with anything. It’ isn’t story driven, character driven, action driven, horror drive, tension driven, or frankly even just driven. 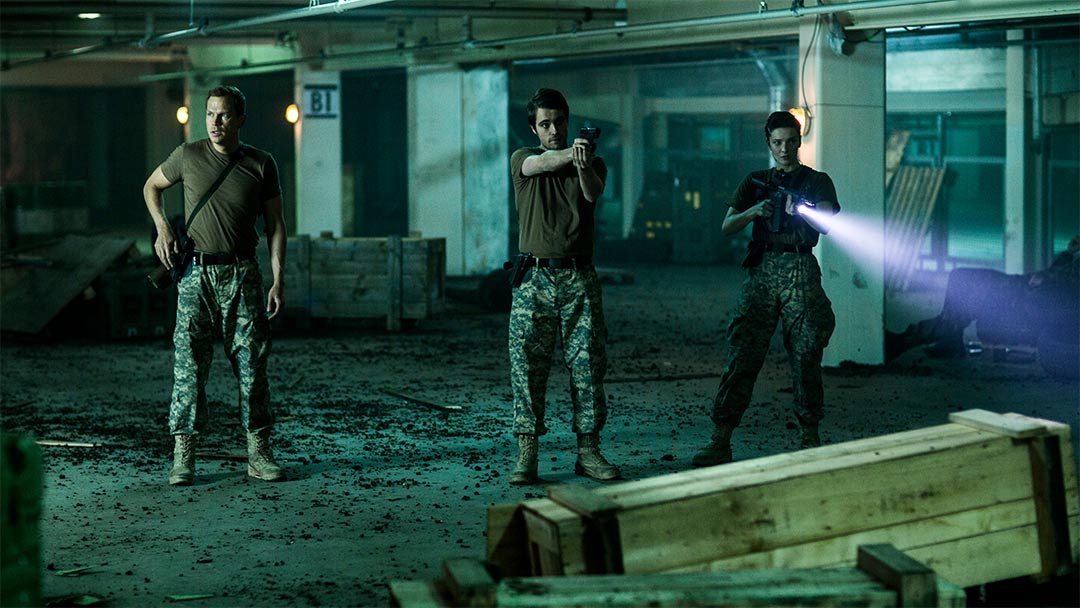 Unsurprisingly given its premise the film occasionally attempts to introduce more videogame themed ideas into the mix. On advancing to new floors of the building, for example, the group will often get given new weapons, upgrading from basic pistols to assault rifles, a single shotgun and even an RPG.  They even get body armor that disappears after being shot once, and a finite supply of medi-packs that can heal their wounds. The movie takes another stab at the whole videogame thing with a gimmick level where a gas leak prevents the team from using their guns, instead they’ll have to draw knives and go in for the close kill. It’s a potentially brilliant setup that could provide some interesting dynamics as our heroes who have been suddenly introduced to life-like VR have to deal with taking a life, even a virtual, close-up while also being all too vulnerable themselves. It’s a premise that gets abandoned almost as quickly as it was conceived, though, with a single knife kill occuring after a tiny amount of time before the cast move on to the next level where they have full access to guns again. What exactly was the point of that sequence again?

The VR premise provides plenty of opportunity for The Call Up to tackle a lot of interesting topics, like has technology really left us disconnected with the world? Do violent games truly make us commit acts of extreme violence? The opportunity is there. It’s never taken, though.  Take a potentially tense torture scene. Rather than using the life-like VR to challenge the players with the idea of having to torture someone who looks so real for information it gets glossed over and then forgotten about. It’s a prime chance to tackle the disconnect that the media loves to talk about between reality and very real violence, and for a brief second it looks like The Call Up is thinking the very same thing. But nope. Any time Charles Barker gets near some of the more interesting material that the subject matter contains, he glosses over it like he’s afraid to give his movie any real depth or anything to say.

If you like resolution at the end of your movie or at least a strong indication of the reasoning behind everything then The Call Up will leave you frustrated. Even people who enjoy some ambiguity in their finales might find themselves sighing at the lack of material to work with. The movie wraps up with no decent explanation as to why everything happened except some very vague inklings. Even those, though, don’t lead to very much.

Ultimately The Call Up is the very definition of a forgettable movie. It has a reasonable cast who do their best with weak material that provides them with no depth or even anything resembling personality, and while it looks decent enough the action sequences are utterly bland. The premise seems like it has plenty of potential, but sadly this is just a boring film from start to finish.

Tagged as: Charles Barker, film, review, The Call Up