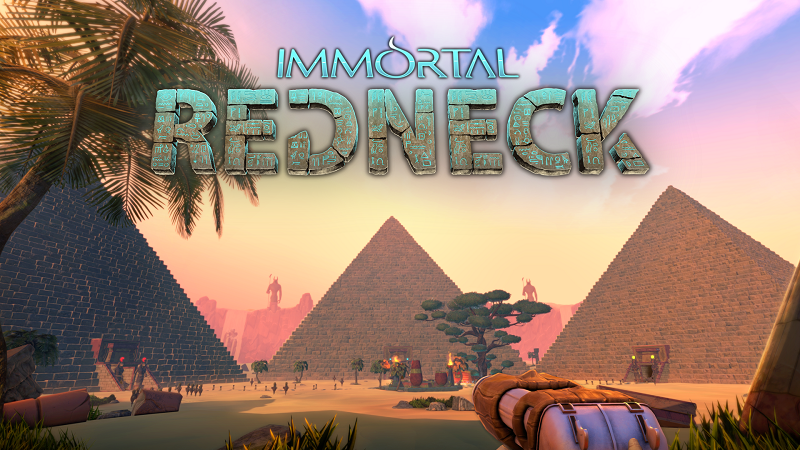 To be honest with a name like Immortal Redneck I really wasn’t expecting much going in to Crema’s indie shooter set within the pyramids of Egypt. But I was wrong. It has rough edges and its production values aren’t very high in places, yet there’s a slick shooter here that rewards skill and speed above all else.

The premise is remarkably simple and utterly insane; a redneck out having fun in the deserts of Egypt on a quad-bike crashes, and somehow finds himself stepping out of a sarcophagus, his entire body having been wrapped in bandages. This is a rather strange version of Egypt, though, as it contains a myriad of odd enemies, such as little lizard things that spit fire and irritable rams, and around fifty different weapons to play with, most of which I’m fairly certain the ancient Egyptians never had. Well, unless our researchers simply haven’t found the shotguns and bombs yet.

For whatever reason your goal is a rather simple one; go in guns blazing and make it to the top of each pyramid in order to face the boss battle. Every floor of each of the three pyramids will be randomly generated, and every time you move up to the next level the enemies gain more health and deal more damage. Each time you enter a room you’re locked in until everything is dead. Simple.

Everything comes down to the shooting itself and here Immortal Redneck excels, taking its cues from the likes of DOOM in how fast you can move. Sprinting sends you hurtling around the map, while a sprinting jump can hurl you a considerable distance. Climbing is a doddle, too, and there’s zero fall damage so you’re free to throw yourself around the environment with abandon, which is handy since you’ve got a lot of control in the air and there is loads of rooms that make use of verticality and floating platforms. The controls are incredibly tight, responsive and precise, matching even those found in the excellent DOOM 2016. Even platforming, the bane of most first-person shooters, feels great because you have such a high-level of control. The only place where the combat doesn’t hold as well are the weapons, which while many and wonderfully varied, don’t pack much of an audio punch or visual punch.

Honestly, the game feels amazing in motion, and that sense of speed and control translates into a hectic combat pace that sees you weaving, leaping and strafing through the levels while keeping your sights trained on the enemies. Cover is important, sure, but the game constantly throws a barrage of foes in your direction, mixing ranged goons and melee fighters in order to force you to move all the time. It creates a breakneck, fun pace that harks back to the days of classic arcade shooters where accuracy and spatial awareness were king.

Eventually, you’re going to succumb to the hordes of bad guys, though, even if it’s just through them slowly grinding you down. This is where the game’s rogue-lite elements come into play as death merely sees you stepping out of the sarcophagus once again, but with all the gold you accumulated. From this little hub you can head over to a literal skill tree and spend all the cash on permanent stat upgrades, increasing things like your health, attack values, speed, critical hits, gold pickup and much more. As you buy things the tree will grow, a nice visual touch, but upgrades also become more expensive. Thus Immortal Redneck is a game about slowly building up your stats in order to stand a better chance of making it to the third pyramid.

Don’t worry, the game isn’t entirely heartless as mid-pyramid bosses unlock medallions that you can purchase and equip in order to start from that level rather than the very bottom again. However, equipping one of these medals means giving up a useful one that may bolster your stats.

Spicing things up are classes in the form of favors from the Egyptian gods that you can purchase from the skill tree. Each one of these comes with a useful skill, a passive ability, differing stats and their own starting weapons. Seth, for example, has high attacks values, an expanding electric bubble as his special move and even comes packing a pretty badass tesla pistol by default that can hit multiple targets at a time. By comparison Apis is the tank class, moving slowly around but boasting huge defence, a brief invincibility stint as his special and a passive skill which lets him lug four weapons around instead of three, such as his starting minigun, revolver, uzi and grenade launch. He may be slow, but he packs a wallop from the very start. The only catch is that after respawning you can only pick from one of two classes randomly selected from those you have bought, forcing you to mix things up a little.

You’ll be picking up new weapons in the pyramids themselves, too. Enemies don’t drop them very often, but from time to time you’ll stumble across treasure rooms, many of which challenge you to not get hurt or to beat the time limit. On top of that there are scrolls to be found that alter the game further. Some are bad, like removing your crosshairs or suddenly ripping away half of your gold, but many add great benefits by boosting damage when you’re on low health or even giving you bonus gold for clearing out the entire floor before leaving. Where the game is smart is in how there’s no way of knowing what a scroll will do before you pick it up, and once you do grab it you can’t get rid of it again unless you happen upon another scroll that allows you to.

Not surprisingly the game’s biggest weakness is repetition. Given that each level of each pyramid gets constructed from what the developers claim is a roster of 450 rooms and the dozens of weapons to get there is a strong attempt at giving players variety, but that doesn’t do much to negate the fact that you’re rushing into a series of rooms and shooting stuff.  Since certain rooms and weapons don’t show up until later pyramids and the enemy roster isn’t very deep you can become a little bored of seeing the same rooms and enemy layouts, although this does depend on how quickly you manage to beat each pyramid. If you’re like me you could wind up stuck on the first one for a long time, thus forcing you to see the same rooms over and over.

But in terms of performance it really does run wonderfully well on the Unity Engine which has gained something of an unfair reputation. There were a couple of moments where it stuttered, but those were rare. For the most part it maintained a perfect 60FPS with v-sync enabled and everything maxed out without issue.

Of course, it’s fair to say that it isn’t a particularly good-looking game. The art style has a distinct look and it’s far from ugly, but there’s certainly a lack of detail and the textures are pretty low quality. With that said given that you’ll be in motion most of the time you don’t tend to take notice.

Despite my initial misgivings about the game Immortal Redneck turned out to be a hell of a lot of fun, a hectic arcade shooter which rewards your skill. The controls and fluidity of the action are on par with DOOM 2016, a game made by a massive company working with a huge budget. Sure, it’s a simplistic game and a repetitive one, but the combat feels so satisfying, as does slowly upgrading upon nearly every death in order to make it further, and further and further with each attempt. Go into it seeking a straightforward shooter and you should come out with a smile on your face. Truly a pleasant surprise, and proof that we really need more rogue-like shooters.