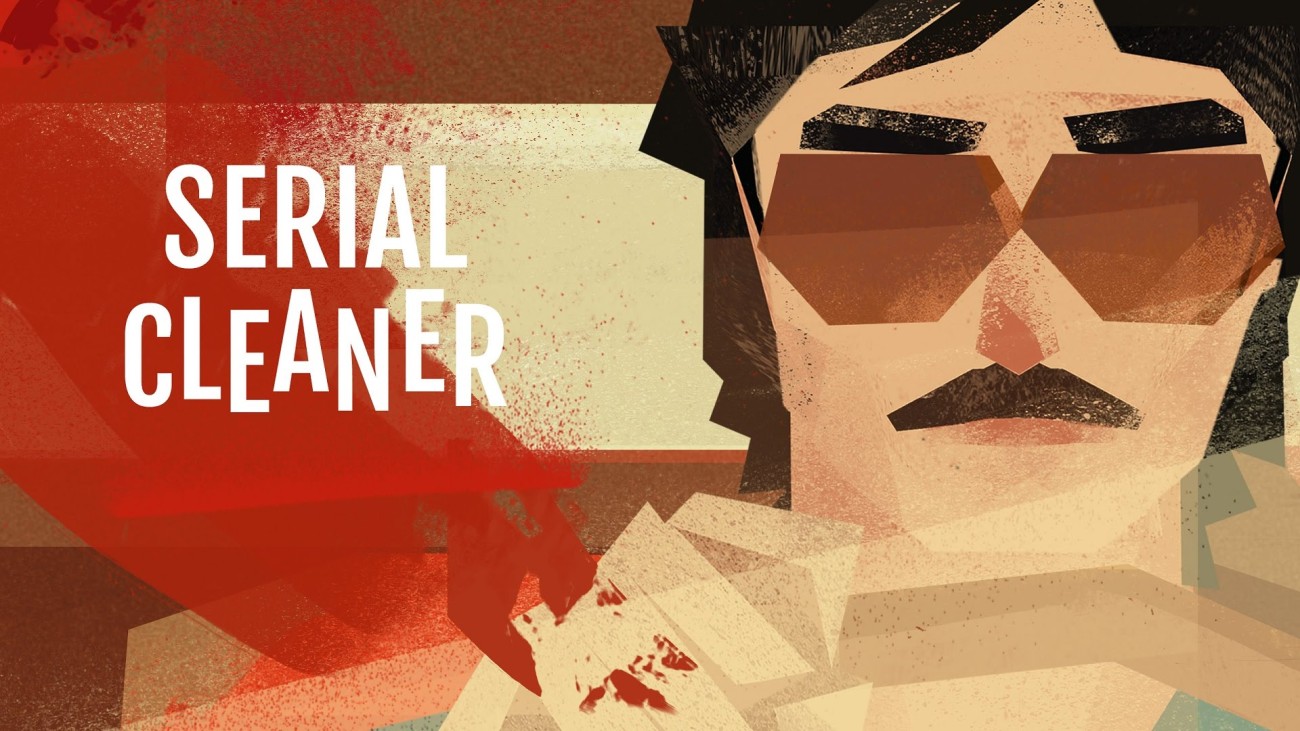 Y’know, I’ve killed many people. I’ve also killed many people in videogames, and while I’ve certainly had to spend some time hiding the corpses from the eyes of roving guards I don’t ever remember patiently hoovering up the blood and pocketing any potential evidence I left lying around. Even the bald-headed Aget 47 was never that finicky. Yet that’s what you’ll be doing in Serial Cleaner, a game that casts you as a man who makes his living going to crime scenes in order to grab all the bodies, clean up most of the blood and then scarper with any leftover evidence such as guns or other nonsense, all while the cops patrol the area.

In other words, it’s a top-down stealth game, and in that sense it doesn’t bring much new to the table. There are places to hide like cupboards and pot plants, cones of vision to avoid and noise to consider as you hotfoot it around the levels in search of corpses and evidence. However, the game takes the basics of the stealth genre and does them well enough that it’s hard to care overly much about the lack of originality. Plus, it also arms you with a hoover for sucking up puddles of blood. I mean, you can’t argue with that, really.

As the game goes on the levels become larger and new mechanics get introduced, such as shortcuts that let you hop across the map and objects that can be moved around, potentially changing patrol routes or letting you sneak around. With careful planning you’ll even be able to trap stupid police officers to make life a little easier for you and your trusty vacuum. You’ll also be able turn on radios and other things to lure cops away from important areas so that you can scoot past to bag a corpse before you carry it away to either your car or a handy location on the map that can be used to dispose of bodies, like a railway or a piranha tank.

Although serial cleaner may be a stealth game it would perhaps be more accurate to describe it as a puzzle game. As the levels grow in size and complexity it becomes a sprawling, moving puzzle that you have to figure out. Some guards have a routine you can count on, while others move in random patterns to make sneaking through more difficult. What obstacles should be moved? Where are the gaps in patrols? You have to form a plan and then execute it, and thanks to Serial Cleaner being quite a challenge at times there’s a constant sense of tension as guards come within inches of spotting you.

Speaking of which, being spotted doesn’t always spell the end in Serial Cleaner, although cops can run quicker than you and all it takes is a single hit for it to be game over, sending you back to the very start of the level. They’ll investigate any missing evidence or bodies, as well as quickly check out body bags that you dump. Despite their unforgiving nature when it comes to walloping you, though, the cops in Serial Killer are actually very, very stupid at times. They’ll brush off corpses going missing, and even if they have a direct line of sight on you leaping into a hiding spot will instantly end the chase. They can quite literally watch you leap into a pot-plant or box and will still assume that you’ve magically vanished before going back to their regular patrols.

Where the game potentially trips up, depending on your personal tastes, is how it handles failure. Whenever you get caught up and restart a level the position of bodies, evidence and blood get randomised, but not enough to actually give the game extra replay value or to make each retry feel much different. And yet, it’s randomised just enough so that you can’t really learn from your mistakes. Had the developers gone completely with one option or the other it would have made a lot more sense.

I also feel it’s fair to say that while the unique theme is certainly interesting it doesn’t manage to remain interesting throughout. Once movable objects get thrown into the mix the developers don’t add any further mechanics, and while nabbing corpses and hoovering blood behind the police’s back is amusing for the first few contracts the novelty wears off after a bit.

A pleasant surprise is a purely text-based story that runs throughout the entire game. You’ll be playing as Bob Gleaner, a man who lives with his mum and pays the bills through the act of cleaning up everyone else’s mess. He gets caught up with some strange killings, and to say any more would ruin the story, but suffice to say it’s actually quite good, if very basic.

The whole game is set throughout the mid 1970’s which informs a lot of the tone, and especially the brilliant music that captures the era wonderfully. It could only be described as FUNKY, BABY! The graphics are unique, a style that I can’t really describe in words alone but thankfully that’s what screenshots are for. This art comes with a large caveat, however, as it’s often unclear as to exactly where boundary walls are, or where you can actually move. The roof of a building, for example, can make it tricky to judge lines of sight. LIkewise in the heat of the moment the top of a camper van might make it unclear as to where exactly the edge is making you briefly stick on it resulting in being caught. As a stealth game precision is paramount to getting through the ambling policemen at the crime scene, so it’s obviously frustrating to have an otherwise beautiful, if perhaps love it or hate it, art style cause problems.

There are a lot of fun little details, such as the slower cops munching donuts, that I appreciated. The levels contain a lot of thought, too.

Once you’ve worked your way through the primary story contracts there are bonus contracts to play through, too, although you first have to find them hidden away in the story mode. These secondary missions have a lot more free reign in terms of settings and locales since they don’t have to adhere to a story.

You can also hit up challenge mode which puts you through the story missions again, except now they all have unique restrictions such as removing cleaner sense or tasking you with never being spotted.

The mechanics are unspectacular in their execution, but done well enough that it’s never a problem and the unique theme may not manage to stay as fresh as I’d have liked but it’s still a cool initial hook to get you playing. My biggest issue is the beautiful graphics that too often cause problems when you get caught thanks to a sliver of a guard’s line-of-sight or because you can’t judge the environment correctly. Yet these issues don’t stop Serial Cleaner being a fun stealth ’em up. I enjoyed playing it from start to finish, revelling in the daftness of hoovering blood up while a nearby policemen is none the wiser.