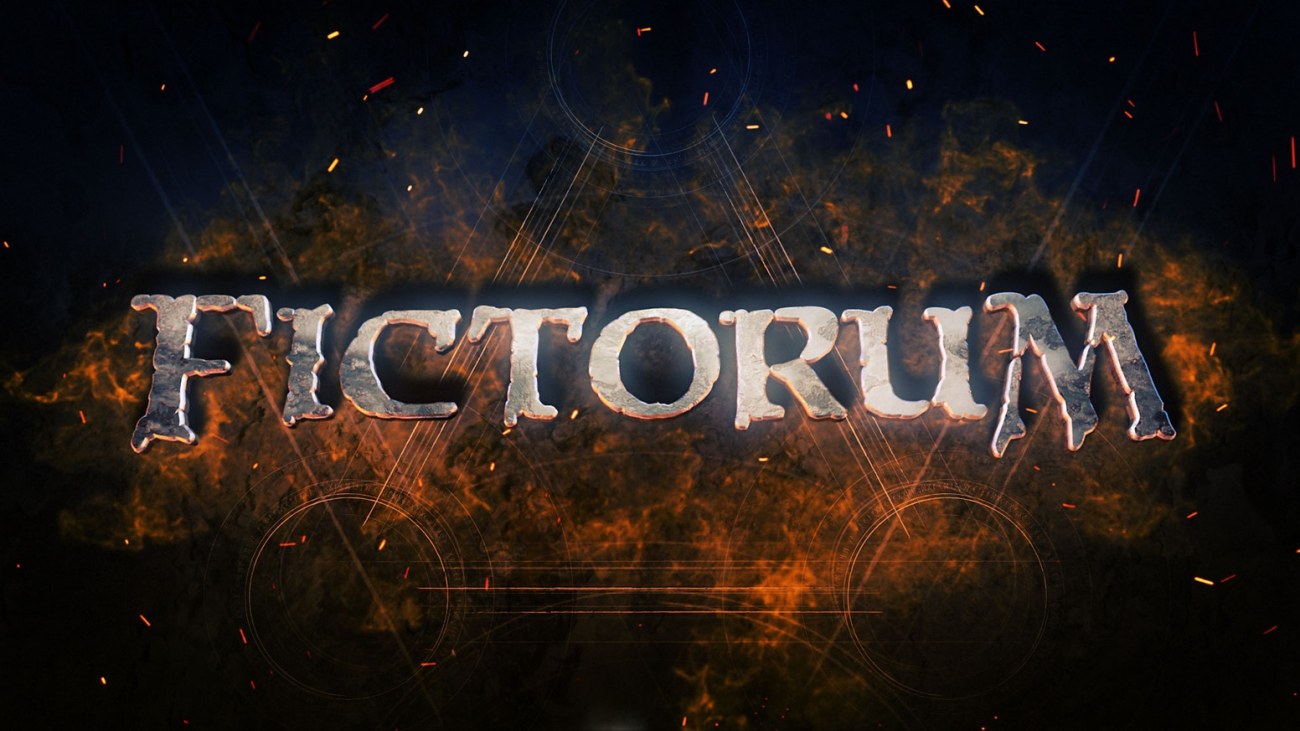 Review code supplied free of charge by the publisher

Fictorum is the kind of game that’s fun for about an hour. The very first time you hurl a fireball at a house and watch it explode into a dozen chunky pieces brings out the inner child who laughs with glee at such wanton destruction. Once that initial thrill is gone, though, it becomes very clear that Fictorum is in need of a lot of work.

But before we get to the many problems let’s touch upon the fact that Fictorum does what so few games manage to actually do; make magic feel powerful. I’ve played a hell of a lot of RPGs and I tend to favour magic users because the idea of wielding the elements or being able to summon creatures or just lob fireballs is inherently freaking awesome, and yet in so many of them magic feels…pitiful. Fictorum lets you blow apart buildings, and by doing so makes you feel like a badass, The games crowning moment, for, came when I found a meteor spell and proceeded to fire it directly down into a tower. Masonry flew apart as the flaming ball of death hurtled into the core of the building, and for just a moment it felt like magic had been done justice.

As you progress through the game you’ll loot new runes that you can apply to your spells to alter how they behave, adding the ability to seek out targets or split into multiple projectiles or turn into a trap. Up to three runes can be put on a spell and will affect its basic behaviour, but you can also “shape” your spell by holding down the right mouse button and then moving the mouse toward any of the three runes that pop up in a triangle shape. This lets you alter a spell on the fly so that if you don’t just want a basic fireball you can spend a bit more mana to have it rain hellish death on a village. Runes can even be enchanted to bump up their power.

This is where most of Fictorum’s fun comes from as finding new combinations of runes and spells can result in stupid scenarios like meteors hurtling down from the sky that seek out their targets before bouncing madly around the landscape, or slow orbs of doom that floats toward their targets or electric traps with chain reactions. Some of the combinations you can create are laughably unbalanced.

Here’s how levels play out: you get dumped into a small, ugly environment and simply have to murder the various enemies in the region, although occasionally you might have to protect some villagers or attempt to avoid blowing all the buildings up. These foes come in two simple flavours; charge head first at you in groups or hang back and fling spells/fire arrows. In other words, they’re idiots with all of the thinking-power of a small rock, and yet somehow despite their supreme stupidity they always know exactly where you are on the map at all times and will use this knowledge to happy charge at you. It’d be funny if the large groups weren’t capable of swarming all over you while your mana recharges.

These areas are also filled with houses and assorted buildings that you can merrily blow up using your magical abilities, and doing that will often earn you Essence that can then be spent at traders. You can also amble inside if you like in order to raid any chests or bits of loot that may be around, and the game swaps over to a first-person view to make navigating interiors easier. Happily, you can actually opt to play in first-person all the time if you prefer, although aiming a lot of the spells is far easier in third-person.

The actual act of blowing up the various buildings littering the environment is made rather unpredictable by a physics system that can’t decide between being lazy or working in overdrive. Sometimes you might hit a building and a few cracks will appear, while the next time the whole thing will explode like someone just unleashed an atomic bomb in the living, spewing debris across the map, all of which can kill you instantly.

Sadly the destruction of random buildings and castle walls doesn’t always go hand-in-hand with the gameplay. It’s possible to kill enemies by dropping a chimney on their head, but since the physics system is so random you might fling a fireball only for a small crack to appear, or it may very well explode outwards whereupon every damn chunk will miss the foe anyway. It would have been nice to have some more control, like maybe being able to plant an explosive ruin inside the house so that on command you can explode a wall outwards.

Of course, flying chunks of debris are a threat you as well. This is perfectly fine because if portions of masonry travelling at excessive velocities were NOT capable of murdering me then I’d be somewhat shocked and demanding to speak to whoever was in charge of physics. However, what isn’t okay is pieces of building that are capable of killing you when they aren’t moving. I died numerous times by touching pieces of a building, and I can only assume that the game still thinks they’re hurtling through the sky.

There’s a lot of other problems with the destruction, too. The fact that houses contain most of the loot and the fact that that loot can be annihilated easily means you spend a lot of time going inside a couple of different building templates and scouring them for stuff before heading back outside to blow them up anyway. And heaven’s forbid an enemy manages to sneak inside while you’re doing it because all of your arsenal is capable of bringing the house down literally, so killing someone inside often means committing suicide in the process.

Then there are the missions where you have to keep buildings intact or civilians safe, a daunting task when levelling entire villages is a huge part of the game’s design and so easy to do. It doesn’t help that “enemy” seeking missiles will view innocent villagers as targets, too, merrily demolish a house just to get to them. The best thing you can do is try to lure the enemy out of town, which is easy enough due to the poor A.I., and then blow ’em up well away from any easily fried villagers.

I also can’t help but point out that in a game where destroying buildings is rewarded with cash that you’ll need to purchase healing and where you are never judged or penalised it’s a bit odd to suddenly take on missions where you defend the local populace having previously killed everybody you had come across.

Finally, the destruction modelling itself isn’t very good. Buildings tend to blow apart in big chunks regardless of material, and it looks like something from the Xbox 360 days, although in fairness this is a small game made by one person so I can’t hold this against the game. However, the fact that the internals of the house typically stay intact is less excusable. It’s a bit to watch the walls and roof explode outwards, and yet for some reason the bed, shelves, tables and other things are all in the same place as they were. I think this is an attempt to stop potential loot being wrecked in the process.

Between missions you’re taken to an overview of rocky islands and given a choice of where to head next, which is where we run into a few more problems. Other than traders there is no way of knowing what’s on an island until you visit it, at which point you’ll sometimes be given a choice or even be available to avoid it, but for the most part you get forced into whatever mission is there which makes the decision feel somewhat pointless. Does it really matter where you go?

Along the way you’ll run into traders who sell new runes or spells, or may even have some armor or rings or boots. The game’s loot is basic, but it’s still nice to gather up some new gear. Traders are also where you can get healed by paying Essence, which brings us to the game’s interesting way of handling health. Whatever damage you’ve taken carries over from location to location and while there some health potions to be found they’re rare and don’t tend heal you very much. What this means is a lot of your Essence needs to be saved for healing, and it’s possible to find yourself in an unwinnable situation where you’ve got no health remaining for the coming battles. Also, while you’re aiming or shaping spells your mana is drained, and should you run out then your health gets eaten up instead.

As you move across the map you’ll be chased by the Inquisition forces who also traverse the world turn after turn, taking over the various places you’ve visited prior. The story surrounding the Fictorum and his escape from the Inquisition is vague at best, but you can piece some of it together and it’s mildly interesting.

As for the graphics and audio Fictorum doesn’t really deliver a stellar presentation. As you can see from the screenshots this isn’t a pretty game and its full of stiff animations and little visual bugs. Textures are basic, there’s just a few types of building and many of the spell effects are laughable. The audio is better, though. While there is no voice acting the spells can sound pretty good, especially the lovely thud of a meteor smashing into a building. Good times.

Performance isn’t great, either. Big framerate drops occur when rubble starts floating around and there’s even substantial drops when fighting a few enemies that can be a real headache. Given that I’m running a Ryzen 5 1600 with a GTX 1080 and 16GB of RAM I feel as though my rig should be more than capable of handling a little mayhem.

Y’know, weirdly I actually like Fictorum in a strange way. I mean, it’s not a good game. It really isn’t. The A.I. is stupid, it looks ugly, there are bunch of bugs and some of the design choices are downright weird. But there are brief moments when you finally capture the feeling of being a bad-ass magic-wielder who has decided, “screw it, I’mma just blow everything up.”

Agh. No. I can’t finish it there. That’s too harsh. This is a game from four people who have a clear passion for the project and who have worked with a supremely tight budget in order to craft something fun. I’d argue that in its current form Fictorum feels more like a tech demo than something that should have been sold to the public. I don’t want the developers to feel disheartened, however. There’s promise here. There’s potential. There’s a future. Keep it up, aye?