This keyboard was provided free of charge by Razer for review.

Razer are something of a divisive force within the PC peripheral industry with many viewing them as over-priced while others have a near fanatic love of their products. As for me I’ve only had my hands on some of their stuff over the years, so I feel like I went into this review fairly open-minded. And y’know what? I’m impressed.

The Tournament Edition of the Blackwidow that I’m reviewing here is a tenkeyless board meaning it comes without the numpad on the right which vastly reduces its footprint. At 36.5cm x 15cm just with no extra space given over to the macro or media keys this is a reasonably small keyboard, making it a good choice for people who like to have a small, tidy desk or like to keep their arms close together when gaming or other things. If you fancy something bigger there is always the full sized BlackWidow.

The build quality is generally great across the board. There is decent feeling of weight to the keyboard without it being absurdly heavy, certainly fitting given Razer’s desire to present it as a good choice for traveling between E-sport events, and the plastic casing doesn’t flex, creak or otherwise give any indications that it’s anything less than solid. With that said the lack of a metal back plate as seen in other keyboards at this price point is a shame since it helps give a more high-quality feel, although it undoubtedly helps keep the price down.

As a bonus there is even a padded wrist-rest sporting the Razer logo included in the box that magnetically attaches to the keyboard, and frankly it’s bloody awesome. There are a myriad of rests available on the Internet in a vast variety of sizes, but it’s nice to see a keyboard come with one specifically designed for it. It’s a faux leather material with a reasonable amount of padding underneath which strikes a good balance between being soft enough for comfort yet firm enough to make it feel like it can survive the everyday rigors of gaming and typing. And being magnetic you can move the entire rest around your table in case you’re like me and prefer to have your keyboard at an angle when gaming. Take heed other keyboard manufacturers.

So, no media or macro keys, no audio pass-through and no USB slots. There aren’t many frills on this little beast, then, the only exception being Chroma, which is, of course, Razer’s patented  LED RGB lighting system. Control is handled through Razer Synapse, and I actually had some issues here: The 3.0 beta version of the software would see the Basilisk mouse I was testing at the time but not the keyboard, while the non-beta version of Synapse would detect the keyboard but not the mouse. Currently, at the moment it seems the 3.0 version of Synapse doesn’t support all the previous Razer devices, so depending on what you have hooked up you may need two versions of the same software running.

Once you get all of this nonsense sorted out, though, Chroma is pretty damn good. Razer has made some bright, striking LEDs that handle the color spectrum rather well. With that said there are a few flaws, like how white comes out looking more like a slightly blue-grey and the yellow seems tinged with green to my eyes. These are common problems with RGB LEDs, however, and besides these gripes, I was generally very impressed with the quality of the lighting. Sure, for a lot of people RGB LEDs are a stupid gimmick, but for those folk they can simply be turned off completely. For those like myself, there is something childishly delightful about having your desk lit up like a firework show.

Coming back to the software the Razer Synapse suite is perfectly okay. It looks a bit dull but is easy to navigate and provides all the options you’d generally expect. Every single can be remapped using a drop-down menu that includes launching programs, mouse functions and much more, or you can assign it a macro which you can easily record. Everything can be saved to profiles that you can flick through using a shortcut.

Lurking underneath the keys are Razer’s own brand of switch, in this case the greens which have a loud click when activated that makes them perfect for typing and for annoying anyone else within a 5-mile radius. These guys need 50g of force to get them moving and have a 1.9mm  activation point along with a total of 4mm of travel. Cherry might dominate the market when it comes to keyboard switches, but honestly, these Razer ones felt just as good. There’s a little bit of wobble in the keys themselves but nothing major and the experience of both typing and gaming felt great. At the same time I was reviewing this board I was testing out Alienware’s AW568 which used Kailh Brown switches which technically require 5g less force to push and yet somehow felt stiffer and heavier. These, though, were much better for me. They might be heavier but they felt light and fast, and my typing speed didn’t deviate from its normal 110 words per minute or so, plus there was that little weird bit of me that got a jolt of pleasure from the clicking sounds. Seriously, what is it about a clicky keyboard that’s so damn satisfying?

In-game performance is predictably brilliant. I say predictably because these days almost any mechanical keyboard will be perfectly responsive for gaming. There is the expected 1000Mhz polling rate and the anti-ghosting/N-Key rollover technology combination that allows multiple keys to be pressed at the same time and still registered. The end result is that during gaming I never noticed any failures when it came to detecting a key press, nor did I ever feel like the keyboard wasn’t responding quickly to my every whim and stupid decision.

In short, I freaking loved typing and gaming on this board. The greens give way with a satisfyingly tactile feeling before a loud, spine-tingling click can be heard.

The only potential issue with the switches is longevity. Cherry switches have been around long enough that we have a very clear idea of how durable they are, but Razer’s own brand of switches is harder to judge, so while they might feel great now there is always the possibility that six months down the line there will be problems. As always I’d advise taking the time to check out forums and other communities where people who have had the keyboard for a while can provide some details on longevity. 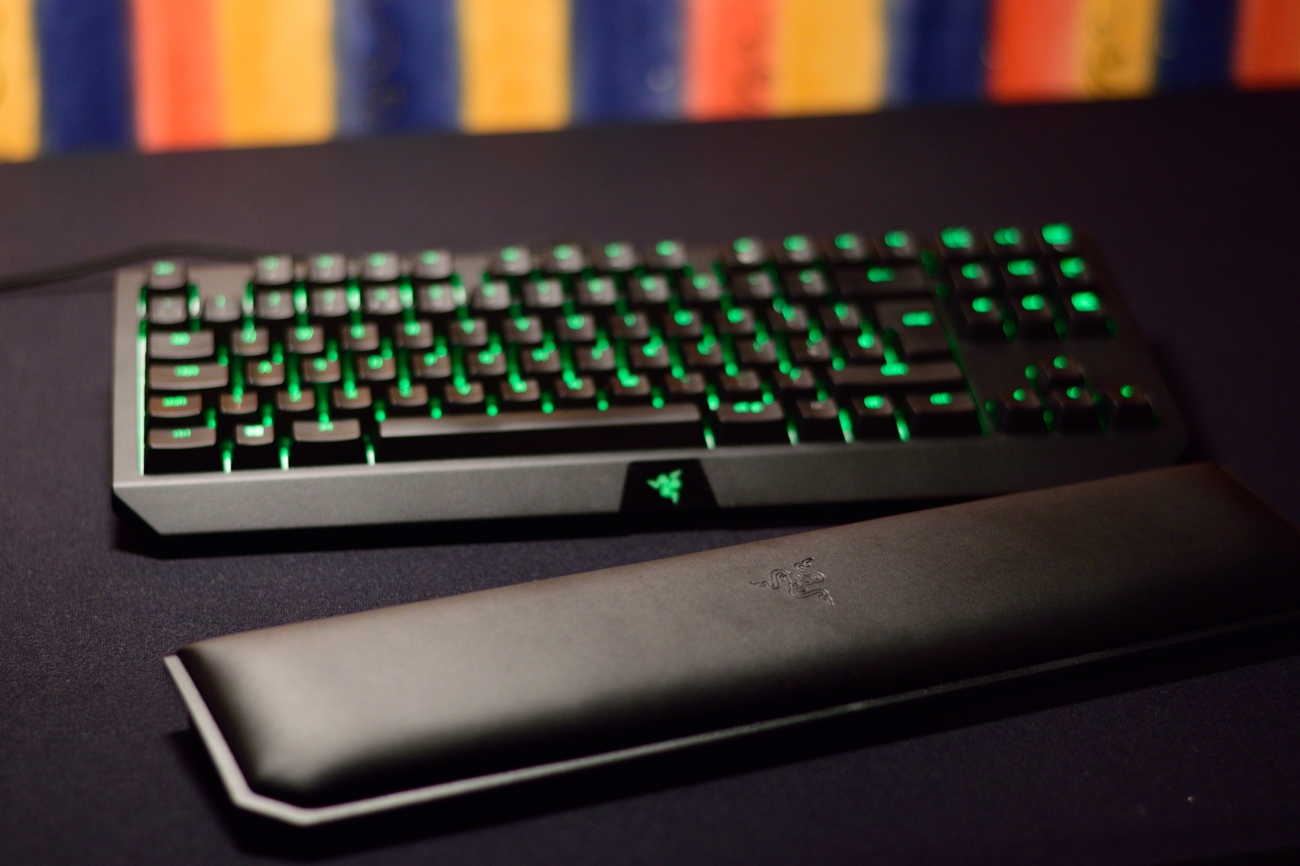 That’s an unknown, though. All I can talk about is the here and now, and in that sense the BlackWidow TE V2 is brilliant in my estimation. Now, to be fair the roughly £110 asking price is high, and the lack of extra features for that sort of cash may very well be a turn off for many people. I do feel they could have provided audio and/or USB passthroughs without compromising on size. But personally, I don’t tend to want macro keys or even media controls as they go largely unused. Nor do I miss the numpad on the right or the lack of passthrough options. If you’re like me and appreciate this more streamlined, compact design then the Blackwidow TE V2 is a fantastic choice boasting great switches and beautiful RGB LED lighting.