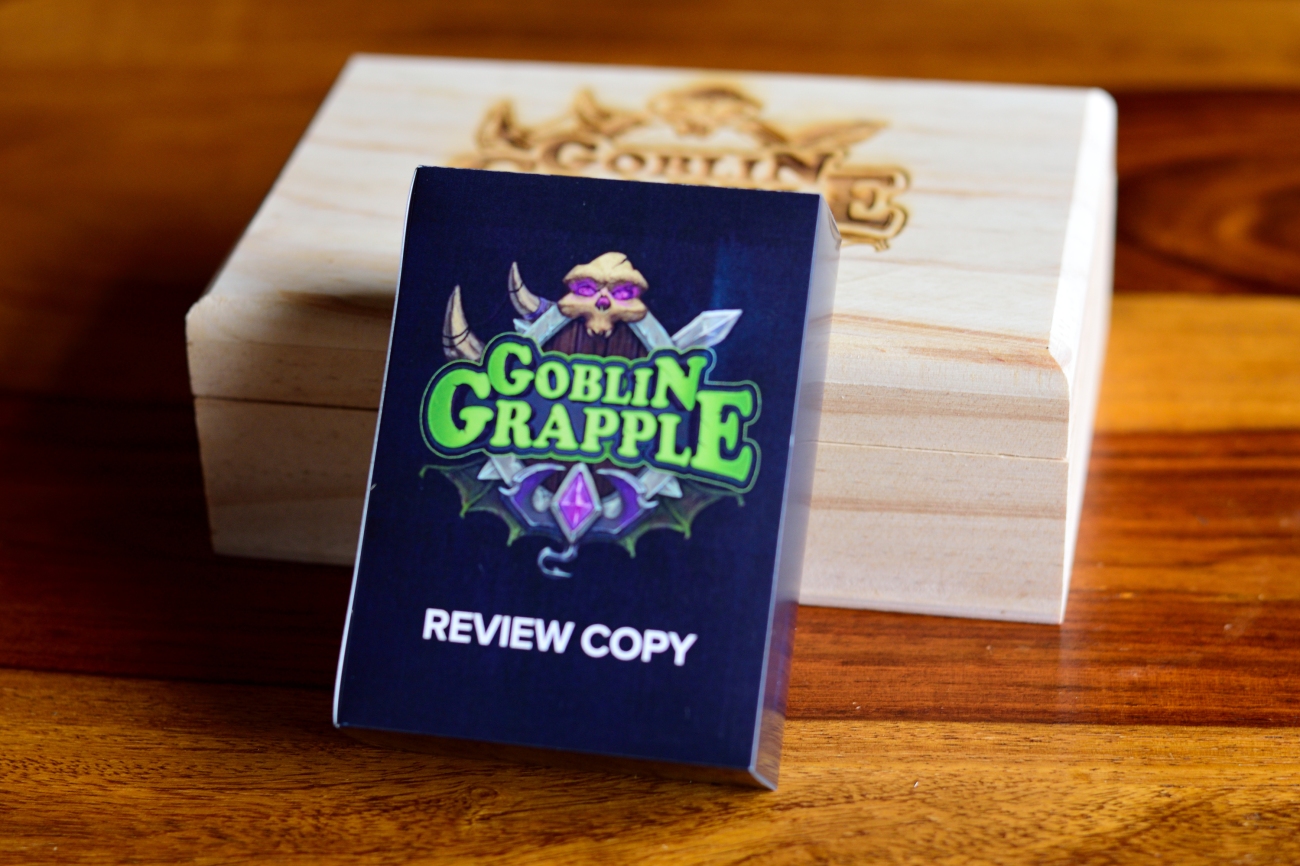 Ah Goblins. They got their big break in the Lord of the Rings movies, really. They’ve always been lurking in fantasy, but when Peter Jackson brought the epic books to life suddenly Goblins were all the rage, with everybody wanting to have them in their games and their books and their movies. And now look at them, the stars of their very own card game that is due to hit Kickstarter on May 6th. But is this a game worth backing? Should you be ponying up some cash?

We kick off with the production quality. My review sample came encased in a lovely wooden box that is apparently a Kickstarter exclusive. What you get otherwise is a little cardboard box, a set of rules that have a few little hiccups in the explanation (there were a few arguments over whether armies were discarded between rounds) and a deck of 52 cards. These cards come with a finish that’s pretty nice on the fingers, though not the toughest so you might want to watch the edges. Meanwhile, the artwork looks good and has a distinct style, though it perhaps not as varied as I would have liked.

You start the game with five cards in your hand and draw a new card from the deck at the start of your turn. However, you can play as many cards as you want during your go, so as the game’s own rulebook notes you do need to know when to play lots of cards and when to calm things down a bit. Don’t get carried away, in other words, although I have to say I didn’t feel like there was a whole lot of reason not to use up most of my cards. Maybe I’m missing something. Maybe I’m just stupid. Probably the second one.

The most basic thing you can do is play a Goblin or Goblins from your hand to your gloriously green army, done by simply popping said Goblin/s face-down in front of you. After that new cards you want to add to your army are placed on top of the existing ones, creating a stack representing your little horde of green-skinned killers.

The other thing you can do on your turn is to pop down a Goblin face-up in front of another player and declare that you’re attacking their army, at which point they flip over the top card of their army and whoever has the highest number wins. It’s that simple, and the victor takes both his/her card as well as the opponent’s and places them in their garrison. As soon as that garrison has 21 points worth of cards or more in it the round ends and a new one begins with every player ditching their cards before drawing back up to five. The points in your garrison are tallied up, plus the total amount in your army.  Interestingly, your army doesn’t seem to get reset between rounds, so based on points it’s actually possible to get a rough idea of the strength of someone’s forces going into the next round.

Attempting to liven up the action are a few special cards that you can use. The Goblin Defender, for example, is a lowly card worth just a single point but at any time he can be swapped out from your hand for one of your Goblins in a fight, thus if it looks like the high ranking Goblin King is about to get taken by the enemy you can quickly switch him out for the Goblin Defender, leaving your opponent wondering what the hell just happened. Speaking of the King he’s the highest card in the game with a strength of eight, but should he ever meet the Goblin Assassin in battle he is instantly defeated, unless of course you quickly play one of those Defenders from your hand. 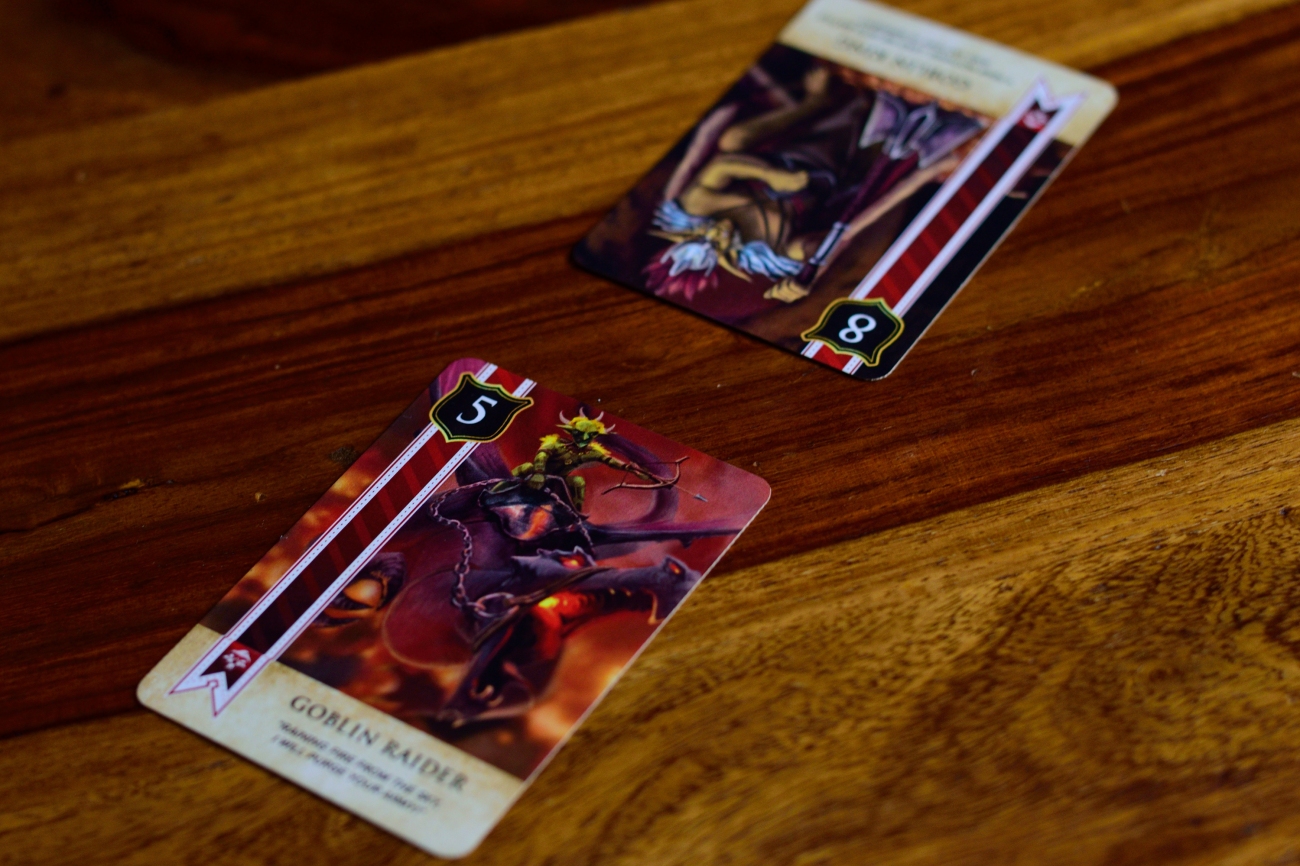 The final type of special Goblin is the spy, a card that is limited to just five copies in the entire 52-card deck and thus rare, and for very good reason. When played the Spy immediately lets you look at your opponent’s hand, pick a card and swap it for one of your own. It cannot be overstated just how powerful the Spy is in this game, since seeing the other person’s cards allows you to manipulate them easily, predict their moves and then crush them without mercy. Good times.

You’ll be seeing a lot of Goblin Mages and Goblin Knights, both of which are cards with a strength of three and no special abilities. These basic grunts make up the majority of the deck, so ties in battle are common. The way this gets resolved is that the defender gets the first opportunity to further the fight by playing another card, though weirdly they have to play from their hand and not their army. The attacker then gets the same option. If it continues to be a tie the fight just keeps going until someone ends up with a higher total or someone just runs out of cards. Again, very simple stuff to understand.

To win you need to total 100 points, and that doesn’t take long. A single round, even with three or four players, will typically only go about five minutes, so this is a fast game to play, as it should be. You can break it out, shuffle the deck, play a match and be finished up in 20-30 minutes, perhaps less.

It’d be a lie to say this is a complete skilless game; the use of a Spy lets you judge what someone is likely to do, and there are some nice mind-games to be had when it comes to reading your opponents and out-bluffing them. Still, at the end of the day luck is almost always the deciding factor. Yes, it’s awesome when the enemy’s King runs headfirst into the assassin lurking at the top of your deck, but chances are despite how awesome you feel it was complete luck that it even happened.

At its core, this is like a much prettier version of the old card game War, and that’s both its strength and its weakness. It’s simple, easy to play with kids or family because you can explain it all in about 30-60 seconds, excluding drunk relatives who need a gentle reminder that they’re drooling on the cards. But this also means that the game never really captured my attention or that of my friends. We played, we enjoyed it and then we pretty much forgot about it. This is no way means it’s somehow a bad game and indeed I believe it to be a nice, light filler, it’s just that in the big wide world of filler games Goblin Grapple doesn’t have anything that screams, “BUY ME!” It’s somewhat amazing that we live in a time where a board or card game merely being “good” doesn’t instantly make it worth purchasing.

So what does that mean for my final verdict? Well, as you may have guessed Goblin Grapple isn’t getting the full recommendation sticker. With that said, if you’re in the market for a light little card game and you happen to adore Goblins then this might be worth funding. It’s not like it’s going to cost you very much, even with shipping.