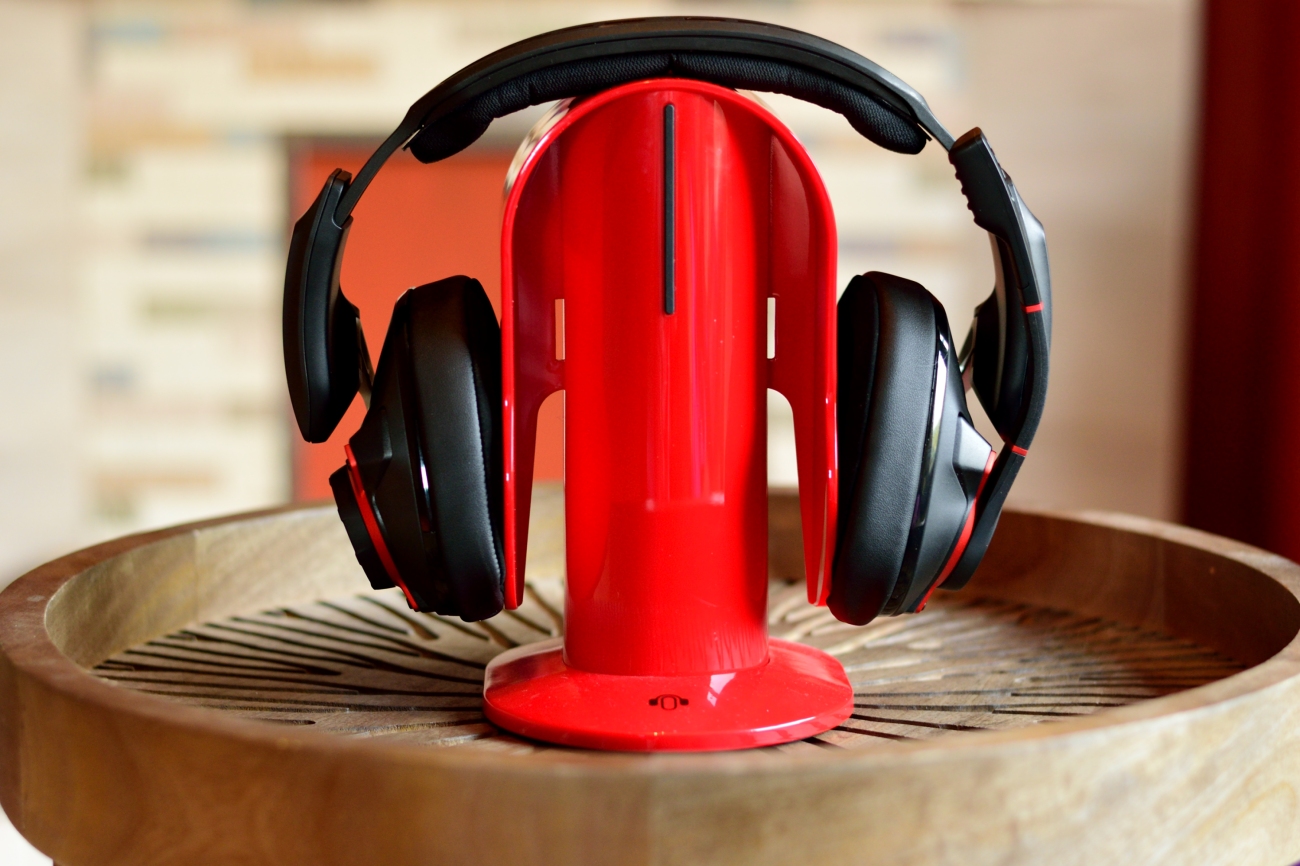 Headset supplied free of charge by Sennheiser for review.

Sennheiser have built themselves a sterling reputation over the years, and in doing so have become a name many people are familiar with. Their headphones and headsets and earphones (is there a consensus on the correct terms, yet?)  range from cheap and cheerful to eye-wateringly expensive, so today I’m checking out something on the more expensive side; the GSP 600’s, Sennheiser’s so-called “professional” gaming headset that will set you back a scary £220 or so.

They certainly get the unboxing part right. Once you lift off the lid the box looks like a display case designed to show off Sennheiser’s work. The only thing missing is some mist flowing over the sides into the table.

But, well, um, you see, Sennheiser have created a frankly ugly set of headphones here. Every time I picked them up I was certain they were going to transform into a Decepticon and begin a rampage through my home of Scotland, leaving a trail of Micheal Bay explosions in its wake. Sharp lines and an overwrought style like someone just wouldn’t stop designing the damn thing are bad enough, but on top of that the GSP 600’s are huge. Whereas most headphones seek to hug the head, the GSP 600 juts out from the cranium like it’s a monster gripping its prey in its claws, the chunky side pieces creating a distinct silhouette when worn. I doubt you’d feel happy wearing these in public, although I’m confident they were never created with that in mind. Hanging them around your neck, for example, is a bit like being choked by a very angry Thor. They grip your throat with a determination usually only exhibited by a drunk adamantly maintaining that they haven’t had too much to drink.

But there’s an upside to the GSP 600’s chunky nature in the form of comfort. Both earcups have about an inch of firm memory foam padding encased in faux leather that keeps your ears well away from the drivers that are pumping out the audio. This luxurious material is somehow wonderfully good at not heating your ears up to uncomfortable levels and does a great job of cushioning. It is also responsible for some of the best noise isolation I’ve ever experienced. Seriously, I wore these in a room with loud music and a child running about screaming and was still able to comfortably watch a video without having to ramp the volume up to excessive levels. If you love to feel isolated from the world then these are for you. You get a bit of padding along the headband, too, again providing great cushioning, though compared to the ears Sennheiser seem to have skimped a little here. Finally, aside from the standard adjustibility that comes from being able to extend the sides there are also two sliders on the headband that alter the clamping force. It’s an intriguing feature and extra adjustability is almost always welcome, but I have to admit that even with my relatively small head I did find myself suffering from the dreaded headphone pinch syndrome after a while, although this is partially due to me wearing glasses. In short, after a few hours they did become uncomfortable unlike my Arctis 7’s which tended to last a bit longer, but those few hours were superb.

The other upside to the sheer size of the GSP 600 is that it could probably survive a direct nuclear strike. It feels less like it was constructed by a headphone manufacturer and more like it was built by the military. At a slightly staggering 395g it’s fairly hefty, and even when you pull, push and prod there are no creaks to be heard, nor could I spot anything resembling a weak spot. I’m confident that if a rampaging werewolf ever bust through your front door you could use these bad boys to beat it to death, assuming you ever actually heard it coming, which you wouldn’t.

On the right earcup there’s a chunky volume control knob that takes a surprising amount of pressure to turn but is pleasingly smooth once you get it going. I like this style of huge knob (HA!) because it makes the volume control so incredibly easy to find.

The left earcup is where you can find the boom mic which sticks with the same chunky design as the rest of the headset. It can be swung down to activate it and swung back up to mute. The sound quality is pretty much identical to Sennheiser’s previous efforts in the G4ME series, which is to say very good but a touch flat and lifeless. Still, compared to your standard microphone found on gaming headsets this is impressive.

The only real issue I could find with the design was whenever the flexible, braided cable rubbed on any surface, including my t-shirt or hoody, the noise would transfer into the earcups and make a horrible racket.

Wait, no, I do have one other gripe; there are no measurements when you extend the headband, so making sure both sides are the same length is a bit of a bain in the butt.

For connections you get two options; one standard 3.5mm jack that has a an audio and microphone connection, or a second four-pole jack that enables connection to console. Once you’ve got it plugged in there’s no software to mess around with, which also means that if you do want to tinker with the audio you’ll need to do so via other methods.

Being a gaming headset the emphasis is firmly on bass in order to really highlight the explosions and gunfire that dominate our favorite hobby. And man does it succeed in this area with some seriously spine-tingling oomph, but considering the almost absurd price-tag of £230 the rest of the audio is very, very good but not spectacular.

Well, that’s true up until you plug them into a decent motherboard, soundcard or DAC system. Hooked up to a phone or even console via the included 4-pole jack the sound is good but just feels like it lacks the power needed, which is surprising because with a rating of just 32ohms the GSP 600 can be run by practically anything. Plugging them into the onboard audio of my (now dead) motherboard was much better, but something was still missing. Once I had them connected to my SoundblasterZ, though, there was a marked improvement, the once slightly flat sound coming alive across the board. I can’t help but wonder what these would be like with Sennheiser’s own GSX 1000 amp system or an even more impressive DAC and amplifier combo.

Of course, it’s worth pointing out that any high-quality motherboard, soundcard or external system will be an improvement to the audio, though on cheaper headsets the difference is minimal. However, this is one of the rare cases where I feel these will especially benefit from having a good source to work from. And again, I have to emphasis that even without that terrific source the GSP 600’s do sound brilliant, but you’d likely be better off with something that isn’t going to dent the bank account as much. 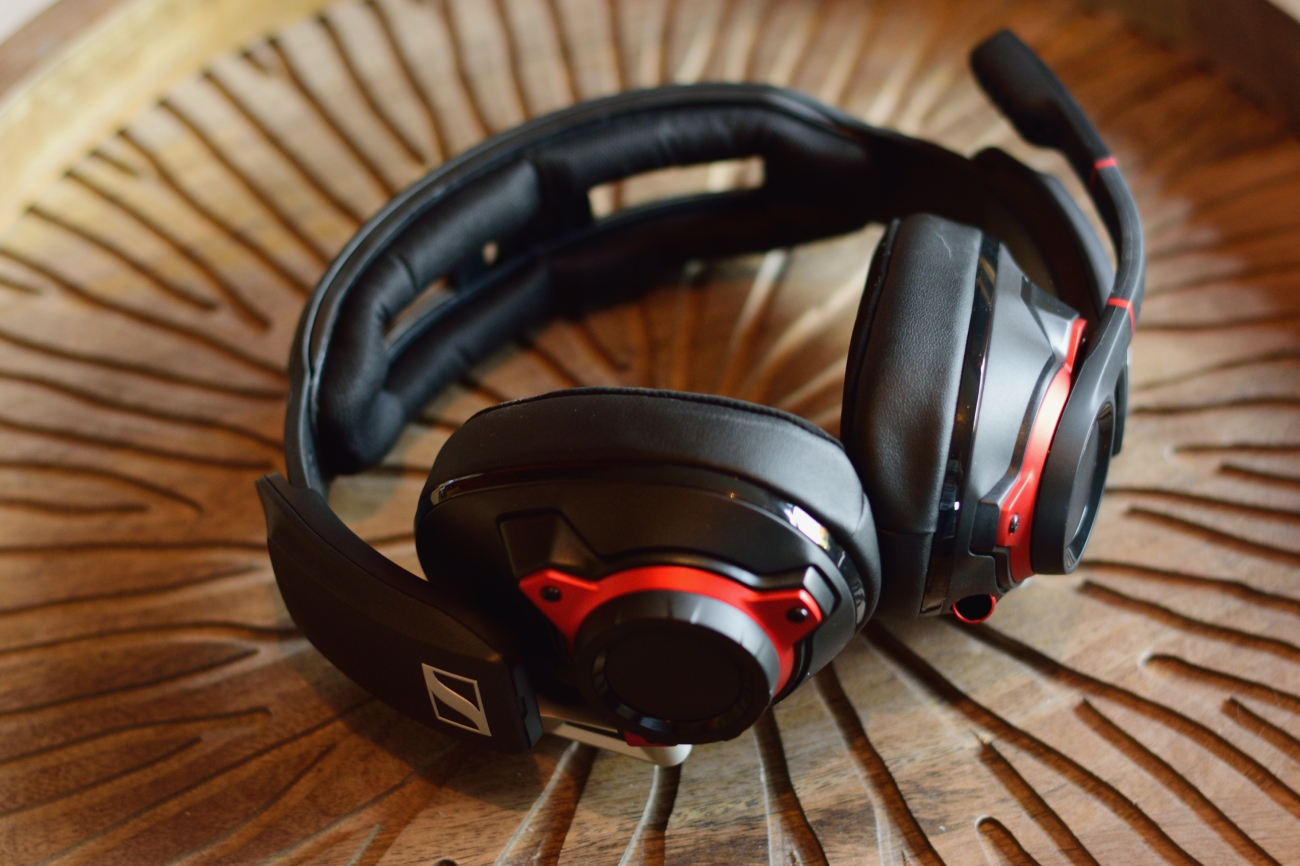 The positional audio is great, too. Given that these are closed-back headphones the guys and gals over at Sennheiser have done a good job of creating a wide soundstage that helps create the feeling of a larger environment. Combined with the detailed audio you can pick out small sounds in the greater soundscape and pinpoint their precise location with ease.

Ultimately, all that holds the GSP 600’s back is the epic price-tag that rockets these past the purvey of your average gamer, and at this sort of price the law of diminishing returns applies. That is, you won’t notice such a substantial difference between these and a good £150 set of cans versus the difference between the £150 headphones and £50 ones.

Make no mistake, though, while the law of diminishing returns might be in effect that does not mean are anything less than exceptional. Sure, I think they’re mighty ugly when sitting next to my sleek, sexy Arctis 7’s with their white paint job and wireless capabilities, but man are they comfy and the sound they deliver straight to your ears is simply superb. The biggest problem here isn’t really a fault as such; you need an external DAC and AMP system or good internal sound card to make these babies sing. And as for console or mobile it’d probably be better going for something cheaper. If you just want awesome audio, though, have the cash and plan on giving the GSP 600’s the treatment they deserve then these are truly amazing.