Starship Corporation Review – These Are The Voyages

Being the head of a corporation commited to designing a range of spaceships in order to fulfill contracts that call for cargo hauling, pirate extermination, mining and more sounds pretty freaking awesome on paper, especially when it lets you design those ships. Having spent a few years in the wilds of Early Access this is exactly what Starship Corporation aims to be, a management strategy game with a sci-fi dressing.

But first I have to admit that this review was going to be largely negative as the game was plagued with issues in its Early Access days. I had access about a week prior to the full launch and was sure it was going to be a disaster. As it turns out, though, a missing attachment in my review code Email included information on accessing a specific reviewer beta that included the planned launch day update, and suddenly the game became so much better. And suddenly I had a lot of rewriting to do. 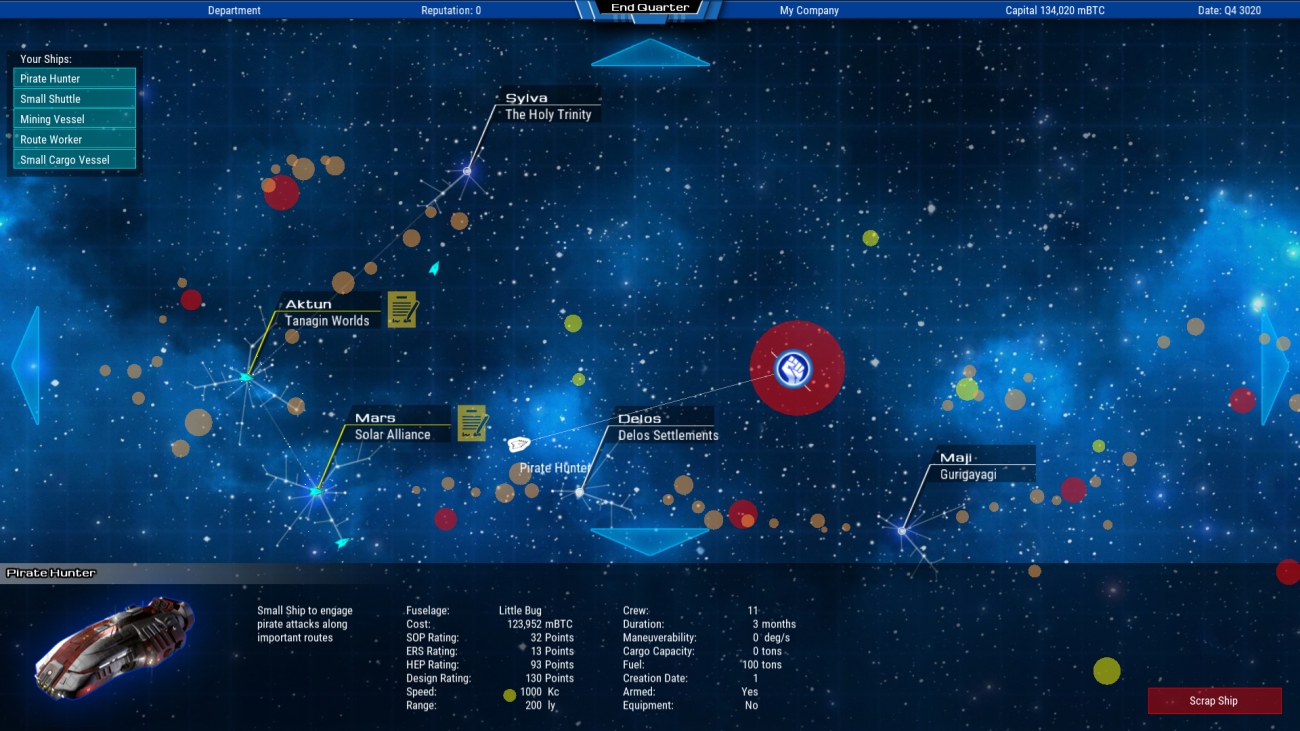 The campaign mode is where you’ll likely start, though you should probably stop by the tutorials first in order to grasp a few of the basic concepts. They don’t do a particularly good job of preparing you for Starship Corporation’s systems, but it’s better than nothing. This campaign aims to keep things relatively simple with a chunky amount of starting cash and a 100,000 credit limit to use up before it’s officially game over. You’ll start out on Mars and from there a couple of different characters will pop in from time to time to offer you what are basically standard contracts with a few twists and more lucrative results.

In the background there’s a vague storyline about sibling rivalry and galactic politics. It’s basic stuff but it does help give the game a bit of extra flavour that it is otherwise lacking in.

The galaxy map is where you can keep an eye on your current fleet and select from the available contracts across numerous planets, either constructing and then delivering the required vessels or assigning a ship from your fleet to the task. These contracts all call for differing things, demanding that your ship meets certain ratings, has specific features and more. You may need heaps of cargo space, or it may have to have plenty of fuel and good engines for deep space work. Maybe it just needs to be loaded with marines and guns in order to deal with some of the pesky pirates roaming around. These contracts also come with a budget, and the more of it you use to achieve the design goals the less profit you stand make, so as horrible as it sounds it pays to design a client’s ship as efficiently and cheaply as possible.

The meat of the game is in designing the various ships you need for the contracts. You select a fuselage from those you’ve researched or bought, and there’s an impressive selection of vessels, all with their own unique layouts and multiple decks that you have to connect using stairways. Then through the blueprint screen you begin planning out your masterpiece by placing down life support systems, engines, crew quarters, sick bays, generators, cooling, command centers, drilling lasers, weapons and so much more. The trick is being as optimal as possible, maximizing the space you have to fit in everything the contract calls for while also ensuring you can still make a tidy profit. It’s intricate work, a spatial puzzle that can leave you scratching your head. How can you fit in more cooling? Should you maybe shift the fuel tanks? What should be on which deck of the ship? Working it all out can be immensely satisfying, and for that reason I found the smallest ships to be the most rewarding at times.

As you gather up more capital the game doesn’t really add anything new or particularly exciting, rather it just gets bigger as you can afford huge fuselages into which you can jam even more stuff, like multiple engines, advanced navigation suites and more. You move from building a little police cruiser for the local government to a terrifyingly huge warship brimming with weapons, and from tiny mining vessels to something capable of hoovering up planets and staying in deep space for ages.

You can get surprisingly attached to them, too, especially with the larger projects. In my case my first reasonably big project was to create a large mining ship that could take on a bunch of cargo and mining contracts as well as just head out into space and mine for valuable minerals, although figuring out how mining works is actually a pain in the butt. I spent ages designing the ship, picking and choosing what to include for the sake of my budget, and eventually accrued enough capital to build it. Dubbed Red Dwarf (kudos if you get the reference) it was a beast, vastly bigger than anything else in my fleet and considerably faster too, due to multiple engines. I was proud of it, and only wished that I could see it properly in the game, but because of the single person actually working on the game it’s understandable that graphically everything is kept to a minimum.

But damn does the game make you go through a lot of frustration to get to that satisfaction. There are just so many issues when building that can drive you up the wall, from the fact that a contract’s objectives aren’t clearly listed which might mean you spend a while wondering why it’s still saying you don’t have a shield generator when you clearly do, only to find out the contract calls for two of them, not one. The user interface is a cluttered mess that makes locating basic information feel like a chore, too, a theme that is repeated throughout the game. For all of the developers many clear talents designing a good U.I. isn’t among them. It doesn’t stop you from playing the game or anything like that, but that won’t stop you from cursing a few of the design choices. Thankfully these are things that can all be cleared up through some updates, however.

Investing in new technology is a big part of the game as you’ll need to expand what you have available in order to fulfill the ever growing list of contracts and the demands that the clients have. You can allocate a quarterly budget to various categories such as engines, bridges, cannons, missiles, cargo bays, navigation and more in order to eventually unlock them for a cheaper price or you can simply pay lump sums to quickly purchase a certain technology, something I found myself doing often while in the middle of designing a new ship. The amount of stuff you can unlock is impressive. It’s cool to see one of your new state-of-the-art cargo transports blasting past one of your old ones, but in the case of pretty much every other bit of technology you’ll unlock the only differences are some numbers going up or down.

A neat idea is that you during the testing of your ships designs and during contracts you can take control of the missions yourself, directing the various technicians, pilots, marines and medics around. You’ll deal with things like fires, power failures, pirates and even alien boarding parties. It’s fiddly stuff, but kind of fun, though it didn’t take me long to resort to the auto-resolve button in order to save time. 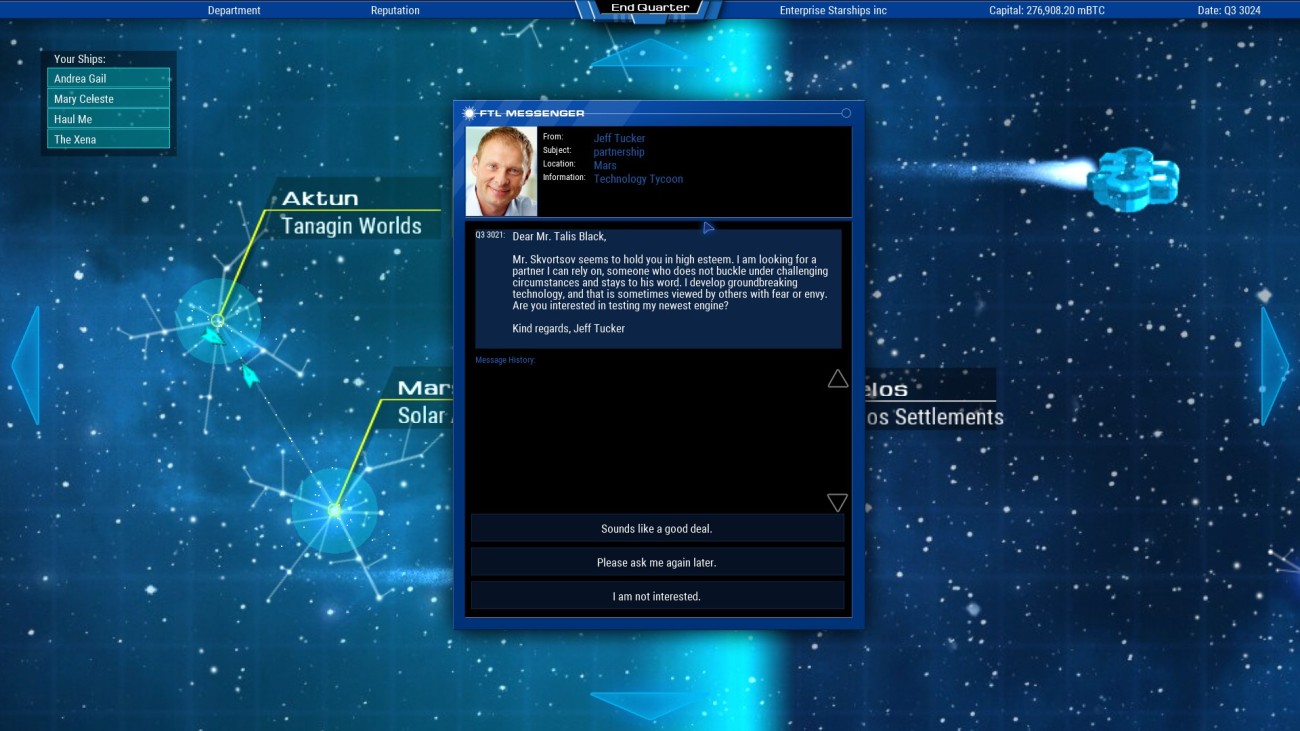 In terms of the depth of the simulation going on Starship Corporation looks like its running an entire economy, but the reality is the wall of numbers and contracts hide a relatively easy game. For example, on the simpler side of the scale your fleet incurs no running costs, not even for restocking fuel, feeding crew or replacement parts. Nor is making money all that difficult; some basic contracts involving transporting food and ore between close worlds will set you up nicely if you invest in a transport ship or two early on. Provided you use some common sense when selecting contracts you’ll likely not feel too challenged during the campaign.

Sandbox mode can help a little here as you can set your starting cash, the amount of credit you can take out before it’s game over and the current state of the economy. This can really help make the game more difficult, and you even get to select the win condition, choosing to either accrue a heap of cash, research all the technology or complete a specific contract.

Still, I did feel like the game could benefit massively from a real-time economy that you could play around with when not actively taking on contracts. Bringing goods or food to a world, for example, should not have to be a contract, and it could effect the price of those items on that world and other places. However, given the one-person development team I think it was smart not to aim too high. Plus, despite being officially launched now Starship Corporation will keep getting new updates, so who knows what we’ll see in the future. 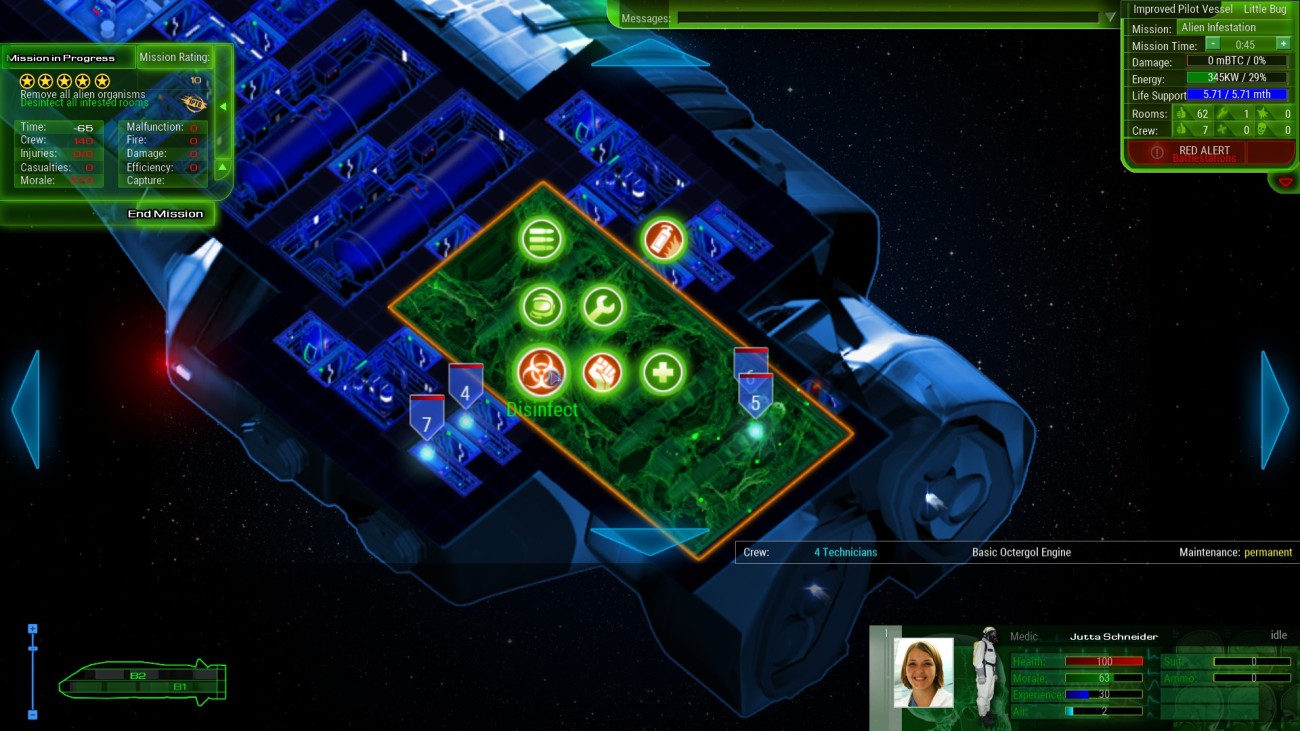 I think there’s something genuinely pretty good hiding within Starship Corporation, a really satisfying management simulator that could potentially please a niche but dedicated audience. There are a lot of rough edges to deal with in terms of the menus and the way the game conveys many of its ideas, but continued updates could polish those issues out. Ultimately, if you like this style of game you’re going to enjoy Starship Corporation and the satisfaction that comes from packing a starship full of technology.