Who doesn’t love a good circus? Over the years, though, the humble sideshow has faded away because it typically featured oddities and things deigned to be “freaks”. This might have included bearded ladies, giant rats or seemingly possessed items. Barker’s Row reckons these things are good enough to bring back, though. The idea is to put on the best side-show of freaks, oddities, strange monsters and mysterious artifacts that you can, with the first player who fills their cardboard grandstand with paying customers being the winner.

It’s an intriguing little theme supported by a deck of tarot-sized attraction cards, each featuring a unique animal, object or other attraction that will hopefully bring in those paying punters. There are alien artifacts, dinosaurs, three-headed sharks and all manner of baffling and exciting things to put into your show.  All of these individual cards feature a superb-looking art-style awash in garish colors that differentiate the four suits; beasts, freak, horror and oddity. 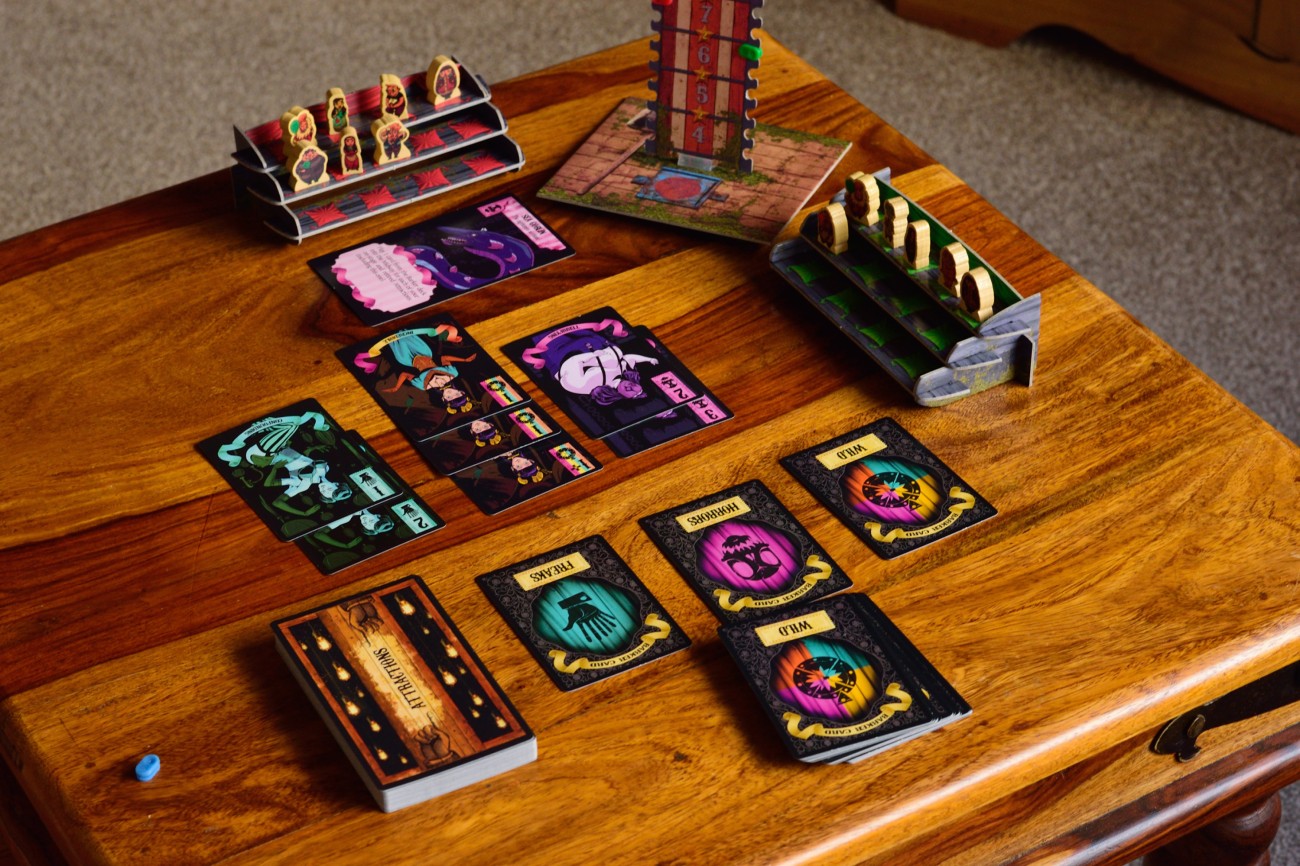 The production quality continues to be great in the form of the 3D cardboard grandstands. Each player gets one to sit in front of them, complete with a handy reference sheet on the back, and on each of the three levels of the grandstand you’ll get to place beautiful little wooden meeples that have characters painted onto them. This will be your growing audience, a collection of odd looking folk that will filter in as you successfully display new attractions. It’s amazing how much presence these grandstands lend the game, and the physical way they are used to score the game really appealed to my young niece, as well as myself.

There is a slip-up in the presentation of Barker’s Row, though. To keep track of how many cards are needed to successfully play an attraction onto your stage there’s a Strongmans tower onto which player’s will clip their own personal little marker. It’s a wonderful idea and like the 3D grandstands it helps give the game a tremendous stage presence, but it’s a case of theme over practiciality. Firstly, to make the tower work the designers opted for a plastic clip underneath the base that holds the tower up, but it means the whole thing doesn’t sit flat. It’s also a bit of a pain to awkwardly hold the tower so that you can unclip your marker and then clip it back on slightly higher up. By all means, it isn’t terrible or anything, but in its current form the strongman tower

But let’s start getting into details of how you play the game itself, starting with Barker’s Row. This spot on the table is where you place the deck of Barker Cards, and in front of that you put three cards from the top of the deck, forming Barker’s Row. Each of these Barker Cards corresponds to one of the four suits, plus there are Wild cards which can act as whatever the players desire. Importantly these cards are also placed into Barker’s Row face-down, the back of each card showing which suit it is but not the cards numerical value.

On your turn you simply take once card from Barker’s Row and play it into the Midway, the name given to the spot roughly in the middle of your playing area. When you place it down you’ll also flip it over, revealing its value to the world. Wild cards are only ever worth one, but they do sometimes have a special symbol that means you get to add another card to the Midway.

The next thing you can do is play one of the three Attraction cards from your hand. Now, to do this you first need to check where you currently are on the Strongman tower, because that number will tell you the total numerical value of Barker Cards you need to take from the Midway in order to play an attraction. For example, if you’re on the very first level of the tower and want to put down your Oddity attraction, which is the orange suit, then you need orange Barker cards (or wild cards) totalling at least four. If there’s enough cards to do something you simply grab the cards from the Midway and toss them into the discard pile like great steaming chunks of garbage. You can then proudly plop your attraction in front of your grandstand, and here the rules nicely encourage you to do so in your best circus voice. “Roll up, roll up! Come one, come all to see the amazing Three-Headed Shark!”

For every attraction you play you get to snaffle two meeples (known as Rubes) and place them onto your grandstand where they’ll eagerly do absolutely nothing. I mean, they’re made of wood so it’s not like they can cheer or anything, but personally I like to imagine them heckling my attractions while bitterly complaining about the cold and the price of the tickets.

Your attractions aren’t just pretty pictures, though. No, each one has a special power that you can activate at practically any point during your turn. One might let you treat a Barker card with a value of three as having a value of six, for example, while another might let you grab an extra Rube for your grandstand if you don’t use any Wild cards when playing another attraction. Whenever you do opt to use an attraction it gets retired, meaning you have to stick it behind your grandstand.

Each attraction you successfully play also means you have to move up to the next level of the Strongman tower, thus increasing the amount of Barker cards you’ll need to play your next attraction. This essentially acts like a way of keep one player from ever running away with the victory, but I did note that it doesn’t always work because typically the most successful player will also however the most amount of special attraction abilities at their disposal.

With that all done you just draw yourself a new attraction from the deck and play carries on to the next person.

And that’s it! Barker’s Row is a wonderfully simple game, one that you can teach in less than five minutes. But as you might have already guessed that simplicity is the game’s big weakness, at least in my beady little eyes.

You see, you’ll rarely ever feel in control while playing Barker’s Row, instead you have to simply roll with the whims of chance. You just pick a card from the three available, hope it doesn’t help another person just as much as it helps you and that’s really it. Sure, you could attempt to get in someone else’s way by deliberately not selecting a card they need, but most of the time it’s pointless to do that since it wastes your time and they’ll just play the card to the Midway on their own turn anyway.

The only hint of genuine thought comes in the form of the Attraction powers. Using them at the right time can feel pretty satisfying. However, luck plays a big part here too because some attractions just feel so much more useful than others.

But I think the biggest problem is that the game is prone to prolonged chunks of time where everyone is just waiting around, flipping over cards. The first few turns of the game are spent doing just this, and then later on once the requirements for an attraction have gotten quite high there can be a lot of time where player after player flips over a card, sighs and concedes their turn. Even more annoying is that after one of these lengthy sequences you might finally be in sight of getting enough Barker cards to play an attraction, only for someone else to use the cards you needed. 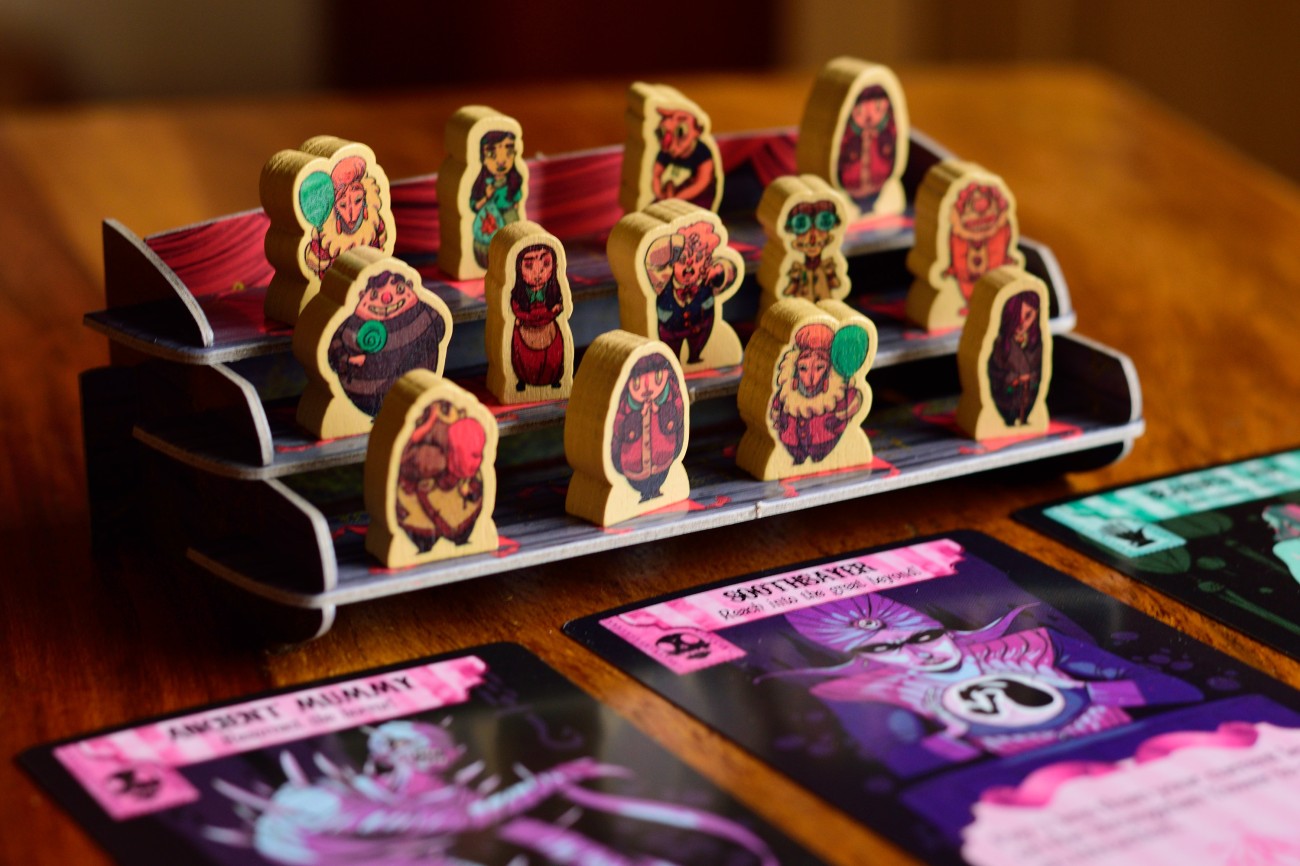 I’ve never been against luck in games, and don’t even mind ones that are based almost entirely on Lady Luck herself, but for me games like that need to use their luck so that they can be crazy or fun or both. Barker’s Row, though, doesn’t do either of those things. It’s enjoyable, but it never has any really funny moments or daft stuff to take the sting out of the luck, nor does it offer any way for you to mitigate luck or have any genuine say in how things play out.

I like Barker’s Row. That might surprise you, but I do. It’s lovely presentation is a large part of why. There’s some joy to be taken from checking out the various attractions and playing with their abilities.