V-Rally 4 Review – A Middle Of The Pack Racer

Review code provided by the publisher.

After 20-years in a garage under a dusty tarp a developer has finally decided to wheel V-Rally out, give it a new paint job and see if the old girl can still run. It’s a sequel I never expected and a difficult one to review because even V-Rally 3 was 16-years ago and my memory of it is fuzzy to say the least. So this is going to be less of a review focusing on whether it’s a good sequel that carries on the series legacy and more of a review talking about whether it’s just a good racing game.

The core of the game is the V-Rally mode which acts as your typical campaign, starting you off with a single rally car and the straightforward goal of becoming the best driver in not only that discipline but also four others. As you win events you gain money that you can turn invest in new rides from the decent selection on offer as well as upgrades for your existing collection of cars. You can also spend some cash on bulking up your team, hiring new mechanics and engineers for repairing cars between stages, while agents can focus on things like finding more events of a specific type.

We’ve seen this team building crop up in a few games, and like them V-Rally doesn’t do all that much with the concept. It basically boils down to hiring the best stats for the job and ensuring you have the money to pay them on payday, a potentially tricky task if you ramp the difficulty up so that race wins don’t come as often.

It’s a shame that there isn’t a little more flair and fanfare throughout the career. Winning a championship is the same as winning anything else; it’s ignored and then you move on to the next event. While other games at least try to give you a moment of celebration so that you can revel in a job well done, V-Rally 4 gives the impression that it just doesn’t care about your success.

All in all, the core career mode which forms the meat the of the game is a bare-bones, basic affair that doesn’t manage to justify the full price-tag of £40+, especially when you consider the budget feel of the game.

Maybe that’s what you want, though. Sometimes you just want to get racing and there’s nothing wrong with that, so let’s get to the on-track action. There’s a learning curve involved, not because it’s a deep simulation that recreates every microscopic movement of the tyres and every grain of sand but because the cars feel more nervous than me when I have to make a phone call. This is a pure arcade affair and cars can be thrown into corners and drifted around them, but there’s a strange twitchiness to them that initially makes getting around the tracks feel like a royal pain in the backside. It’s like a weird mix of the cars being glued to the track but sliding on a thin layer of plastic that sits on the top of the tracks. There’s a tendency toward oversteer by default that will likely make your initial forays onto the road involve a lot accidentally sliding sideways because the car decided that your push on the left stick actually meant, “do a doughnut!” 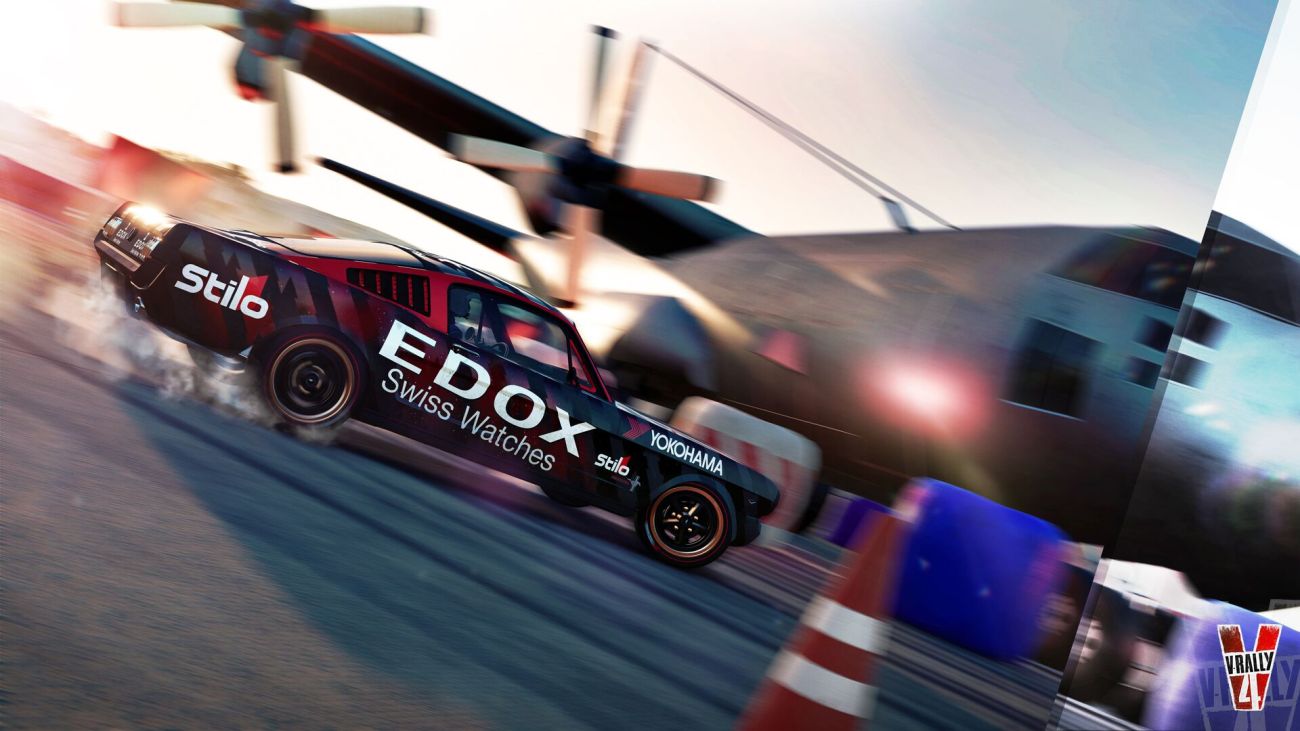 Eventually you’ll get a grip on how the strange handling works and you’ll be able to enjoy those moments where you drift around a corner like a badass, but even then the way cars turn and feel on the various road surfaces never truly clicked with me and as a direct result I never felt like I was in proper control. Now, in something like DiRT Rally there’s always a feeling out being out of control, but that doesn’t stem from the controls and handling, it comes from always being on the ragged edge of how fast you can go. Here it constantly felt like the handling and physics were slightly off. But maybe that’s just me.

Much of the problems stem from the fact that the developers have tried to include multiple disciplines like rally, rally cross, buggies, hill climb and Gymkana but also seem to have created different handling models for each of them. That’s absolutely fine because obviously different styles of vehicles can handle radically differently, but there should always be an underlying consistency in the physics that I felt was missing here. The hill climb cars, for example, take the twitchiness to a whole new level, like they’re magnetised to the track, while the hefty buggies feel oddly light and disconnected from the tracks. This leaves both disciplines as the weakest in the game.

Still, while I can never claim that the handling clicked perfectly with me after numerous hours I was comfortable with it and found that initial difficulty in adjusting was worth the effort. Rallying is a lot of fun as you can drift the cars around, while the gymkhana races feature tight tracks and fast cars that you can really fling into the corners. There’s something really satisfying about nailing the gymkhana courses. The rallycross is more of a mixed bag, though, as the A.I. really isn’t up to the task of side-by-side racing most of the time as it seems largely unaware of your existence and slow.

The tracks are kept purely fictional which works perfectly in the game’s favor. While the track selection per discipline is rather small, the overall amount is good and they’re almost all good fun to drive on. The rally stages had good mixes of confined, tight roads and more open spots where you could really floor it, while the gymkhana events had a few fun obstacles and settings to deal with.

Outside of the main career mode you’ve got a fairly standard bunch of options for jumping into a quick race or heading online, although even just days after launch the multiplayer is a barren place, so actually finding races was problematic. On the plus side you can also access online events in the career mode and since there are so few people taking part it’s an easy source of quick cash as you can set a basic time and probably wind up with a good payout.

A nod of respect has to be given for the game’s inclusion of split-screen in keeping with the good old days from which V-Rally harkens.

Graphically the small budget and limited technology make themselves apparent often, especially in areas where the lack of anti-aliasing makes the tracks look rough. It’s missing the sharpness you might expect to see and the overall quality of the textures is just passable. This is most noticeable on the cars themselves which look rather flat and lifeless due to their lack of detail and also due to the basic lighting model. However, the colour palette is vibrant throughout and there are some nice weather effects on show. In the end it’s a passable looking game, but that’s about it.

The same goes for the audio work. There’s minimal voice acting which is completely fine for a racing game without a story, so the focus here is on the rest of it. The cars themselves are a mixed bag of quality with some sounding quite nicely, especially as you transition from the open air into a confined space and can hear the sound of the engine bouncing off the walls and ceilings, but other vehicles sound weak and weedy, not at all like the snarling beasts that real rally cross and rally cars are. The sounds of your tyres on gravel, tarmac, sand and everything else is fine, but impacts with the environment or other cars sound and feels anaemic.

On the plus side the fact that this isn’t a visual powerhouse means that the performance is pretty much rock solid. I reviewed V-Rally 4 on an Xbox One S and didn’t notice any drops in the 30FPS framerate, although the slightly long loading times were a tad annoying.

In the end, V-Rally 4 is a tricky one to render a verdict on. I had fun with it once I wrangled the controls and began to get a better feel for how the cars twitched and pranced across the tracks, and I did really enjoy the gymkhana races. However, the fact that I thought one discipline was just okay and actively didn’t like the other two is a big problem. As a full-priced title I don’t think V-Rally manages to finish on the podium, especially when you compare it to the many other great racing titles that are out there already or about to be released. If this had arrived at a lower price it would have done so much better. So, my final opinion is this; it’s a decent arcade racer that might have benefitted from focusing more on a few disciplines and creating a fleshed out career mode rather than trying to compete with the DiRT titles on a much tighter budget. It’s only worth picking up if you’re really, really needing that arcade fix or if you find it on sale.