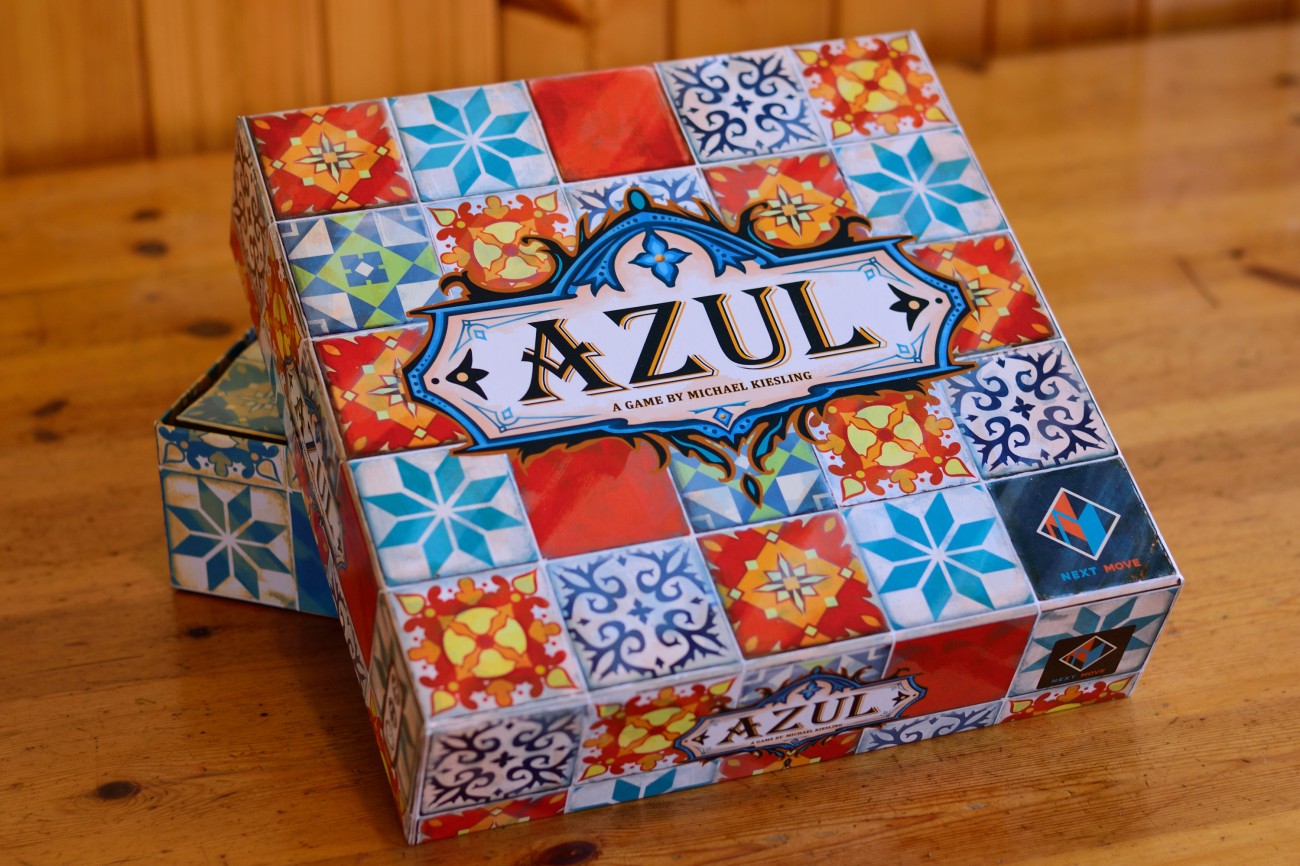 Many, many board games involve the concept of laying down tiles to do a variety of things, such as building the board. Azul, though, actually has you laying down tiles to create a beautiful mural. The reason behind this is that you’re a tile-layer who is to decorate the palace of King Manuel I of Portugal after the King became enamoured with azulejos (blue and white tiles, originally) of the Alhambra in Spain.

Azul’s beauty is a little more understated compared to some of the other board games out there. It doesn’t seek to entrance and entice with piles of sexy miniatures and oodles of cards dripping in pretty pictures. Nope, Azul is classier than that. It doesn’t feel the need to rip its clothes off and assault your senses, rather it understands the benefits of some sexy lingerie and…bloody hell, what is wrong with me this month?

The point is this is really a rather lovely game to look at. The stars of the show are the chunky, shiny tiles that come in a small array of vibrant colours. They look like juicy sweets and fancy chocolates, which is why I constantly had to keep them away from the prying hands of my littles niece who became utterly convinced that I was hoarding sweets. I mean, I was, but the tiles needed to be kept away from her regardless. These weighty tiles feel fantastic in your hands, and when they all got chucked in the included cloth bag so that they can be randomly drawn you get this wonderfully gratifying sound as they all move around. And then you get to put them on your own personal little player board and create a lovely picture. It’s like zen, but in plastic form. 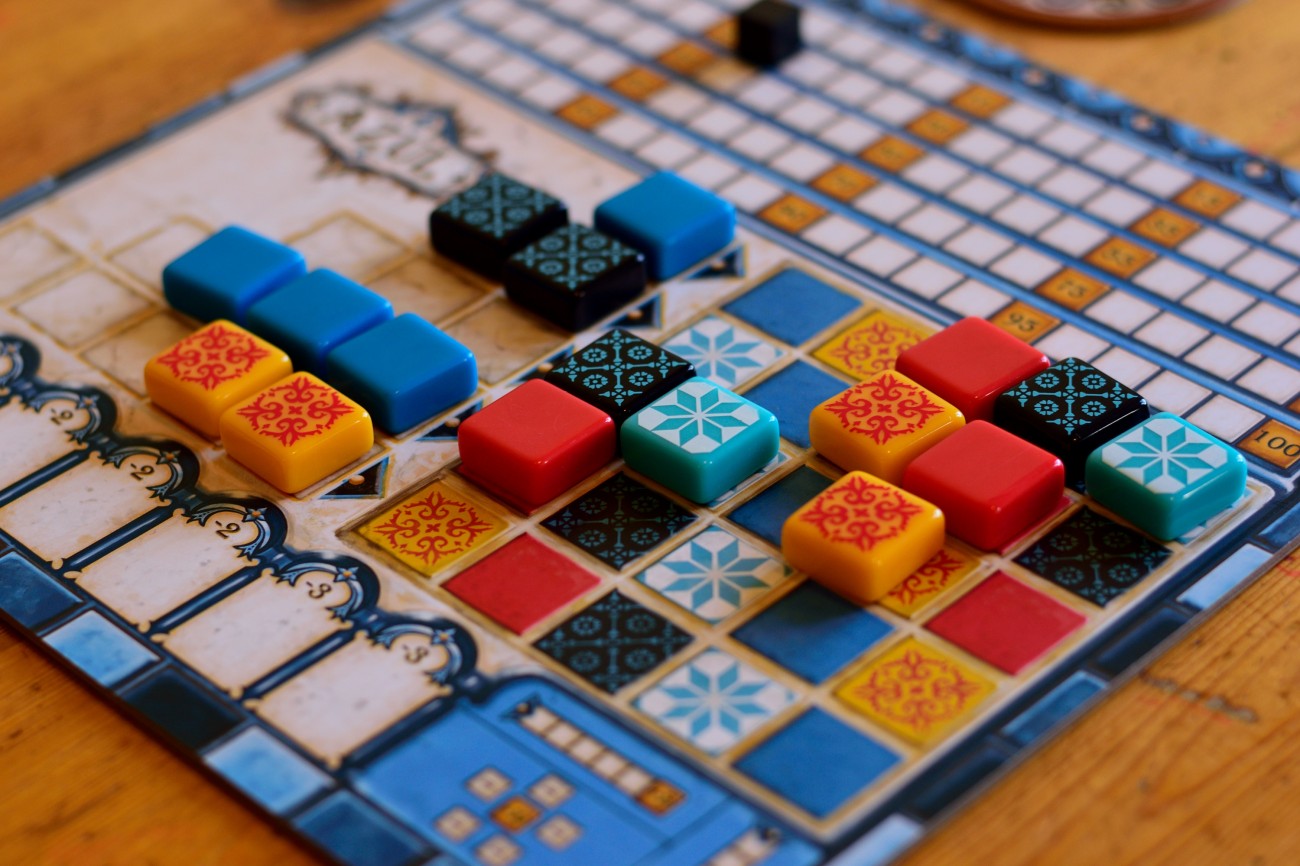 At the start of your turn you must take one or more new tiles from either the various circular factory discs or the central discard pile. The catch is that you have to take ALL of the tiles of your chosen color from that location, so that could mean taking a single blue tile or four orange ones. If there are any remaining tiles on a factory you shove them into the centre of the table, or if you took your tile/s from the middle then the very first person to do so gets to grab the first player marker.

Now that you have some shiny new tiles and have hopefully resisted the urge to eat them because they totally look like Starburst sweets you have some decisions to be made. All of your new acquisitions get placed in the left-hand display on your character sheet, ready to be moved over to the pattern on the right at the end of the round.

There are a few catches here, though; firstly each of the five rows contains a varying amount of spaces. If you have three red tiles and want to put them into the second row that has just two spaces you can, but that extra third tile will fall on the ground and smash, as represented by it being put on the special row on your player board where it will be worth negative points at the end of the round. Because you’re a clumsy bastard.

The next thing that you need to know is that if the row you want to use already contains tiles then you can only add new ones that match the colour of the existing ones. You can’t mix and match, in other words.

Finally, to actually be able to move a tile from the left-hand rows to the pattern on the right then the row must be completely filled. If it isn’t then at the end of the round all the tiles on unfilled rows just get chucked into the box. What a waste.

The round only comes to a close when all the tiles have been claimed, so it’s pretty likely that no matter what you do you’ll wind up with uncompleted rows and a small mountain of useless tiles. 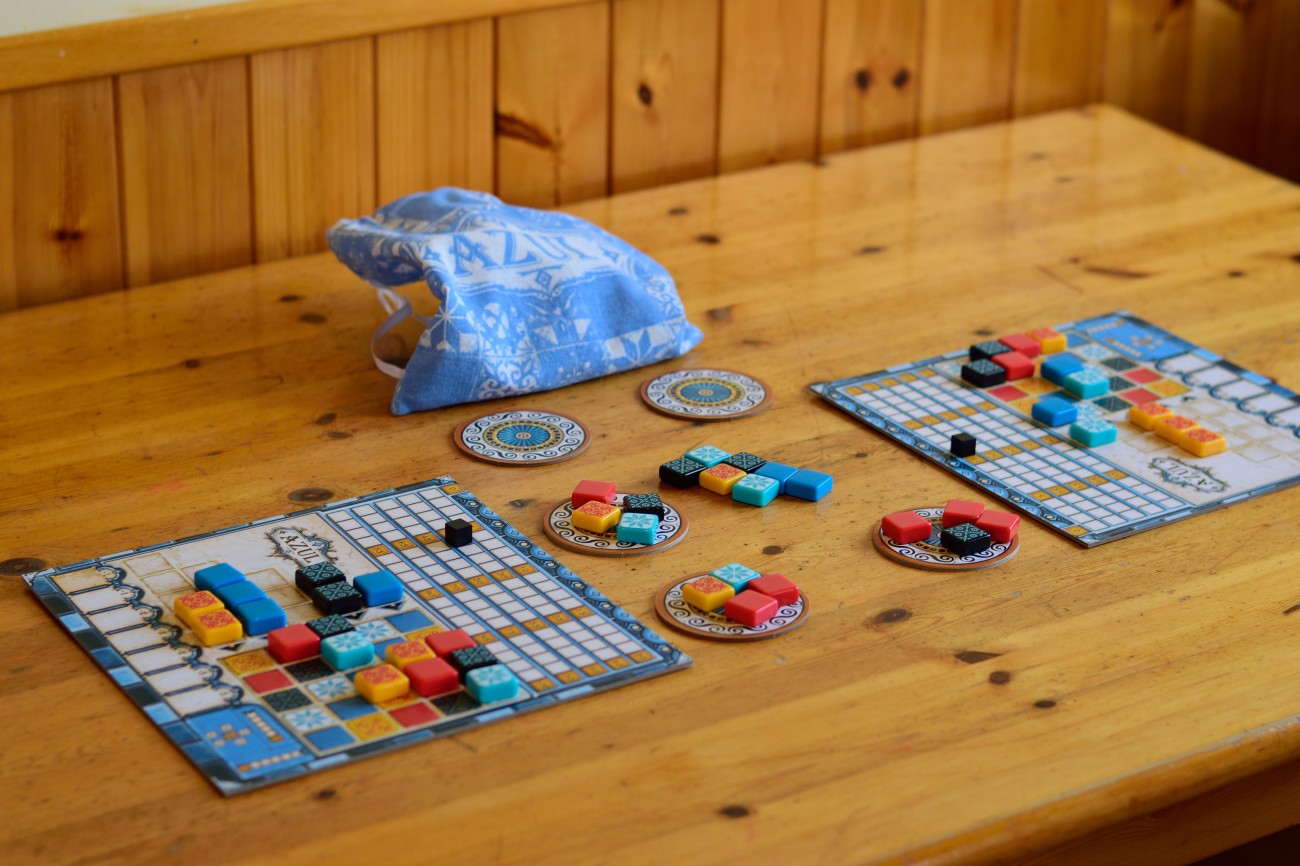 Okay, so you’ve managed to hopefully fill a few lines and that brings us to the points-scoring feast where all your hard work will hopefully pay off. On each completed row you take the rightmost tile and slid it across to its matching location in the pattern, while the remainder of the tiles from that row get tossed into the box for later. A single tile scores just one point, but if it gets placed somewhere that makes it part of a horizontal or vertical row of other tiles you get one point for each and every tile in the row.

In other words it’s a good idea to build up your mosaic of tiles in rows rather than placing a tile here or there, but be careful because if a player completes a horizontal row then that triggers the end of the game. At this point, some bonus points get handed out with completed horizontal rows granting another two points, and every vertical row netting you seven points. Finally, filling in all five spaces of a specific tile type gives you a whopping ten points.

It’s a pleasingly fun puzzle to solve, one that at first glance doesn’t seem all that tricky to work out but is actually reasonably taxing on the brain without ever being frustrating. It’s a tricky balance to get just right yet Azul manages it. The puzzle it offers don’t take a super-genius to figure it out, but you’ll still walk away feeling like your brain has been lightly exercised.

If you fancy a bigger workout for the ol’ grey matter you can flip the player boards over to their alternate side where instead of a colour pattern for you to follow there’s just a gloomy grey square waiting to be filled up with pretty tiles. The rules here state that no column or row may not contain more than a single tile of each colour, thus a seemingly simple puzzle becomes just that little bit trickier. 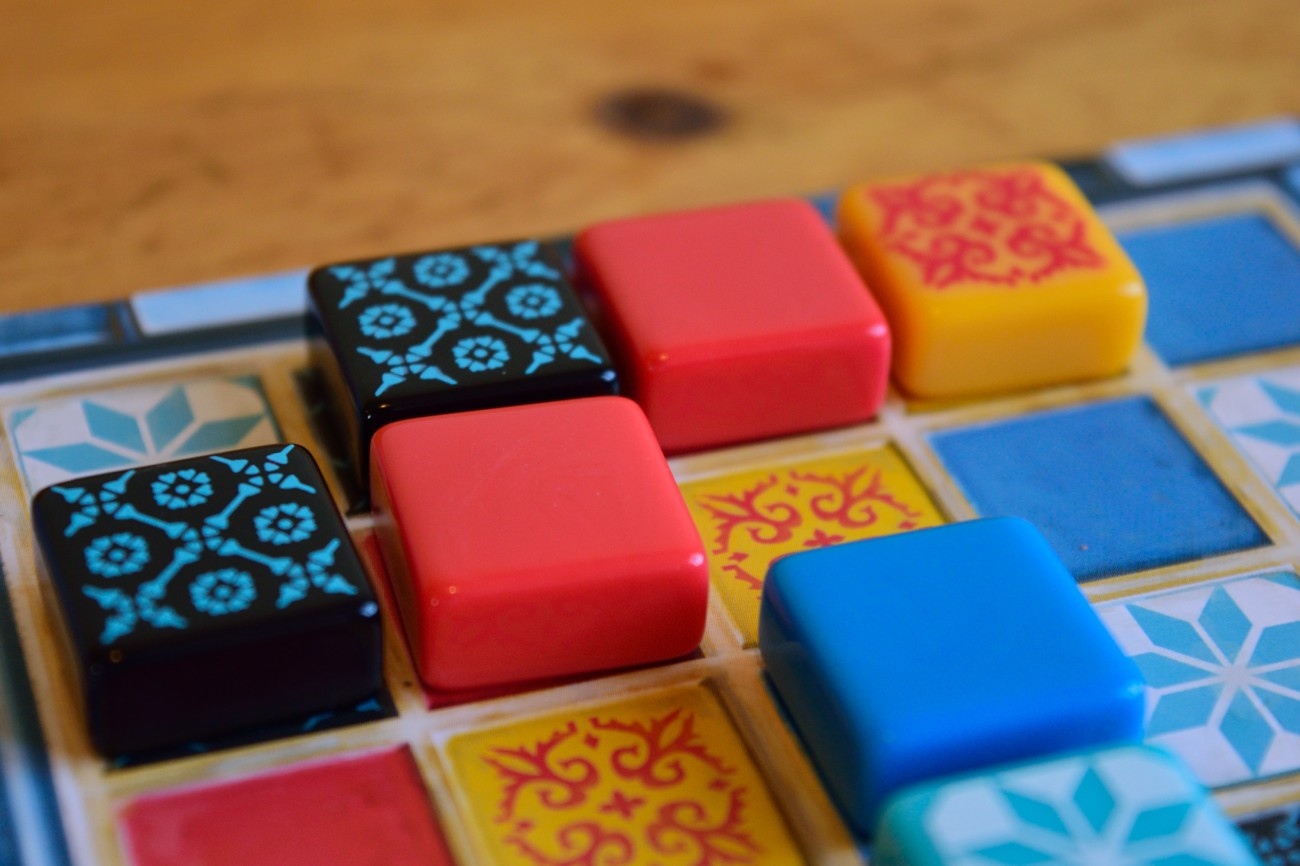 What I really found myself loving about Azul was that despite it being an abstract puzzle game it always made sure you were interacting with everyone else at the table. While you certainly don’t have to and it isn’t encouraged anywhere in the rules, there’s a lot of potential conflicts to be found within claiming tiles. Sometimes you’ll just pick up a bunch of tiles someone else wanted without even realising it, eliciting a heartfelt groan, but you can also keep an eye on what all the other players are doing and deliberately grab things they need, especially if you’ve looked at the table and already figured out that there is nothing else you can do for yourself. In other words, Azul leaves space for you to be an arsehole, and I’m okay with that.

And it’s all just so damned streamlined, too! It’s sleek and shapely and so finely balanced, not a single ounce of excess flabbiness to be found anywhere. Just a few player boards, some factories that look oddly like coasters, a pile of tiles and that’s it. A few pages of rules is all it needs to get you going, and once you’re playing there’s a sense of elegance about it all, a series of simple mechanics that result in difficult choices.

If there’s one thing I’d say is a problem in Azul is that it’s actually trickier to teach than you might think. The mechanics are all quite straightforward and simple, but a lot of people I tried to teach it to struggled a little, largely, I think, because the ideas aren’t the most intuitive. It’s the leftmost rows that seems to catch people off the most, especially since all the other tiles except for the rightmost ones get tossed back into the box to be used later when the bag needs to be refilled.

That’s a small and pretty insignificant problem, though, and does nothing to stop Azul being a lovely little puzzle game that’s good for a wide range of ages and types of gamer. What starts off feeling a bit like a solo game that just so happens to need a few people sitting at the table winds up becoming a tense affair as you eye up everyone else, plan out your moves multiple turns ahead and even steal tiles that the other players might need. For a game of this style it may perhaps be a tad too cutthroat for some, but to me that just adds to the brilliance of this stunning game. 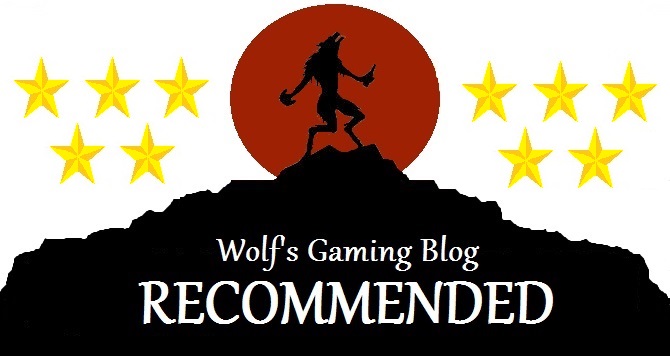