In a surprising twist it has been officially confirmed that Street Fighter 5 will be coming to PC and PS4 only, excluding last-gen players and Xbox owners. It was confirmed that the game is not a timed exclusive, so in theory it should not be appearing anywhere else. […]

Blood Bowl 2 Announced For PC, Xbox One And PS4

The violent, beautiful, gore-filled sport of Bloodbowl is getting a sequel. Announced today by Focus Interactive Bloowbowl 2 is set to arrive Spring 2015 on PC, Xbox One an PS4. For those a tad to young or not of the geeky persuasion Bloodbowl began life many years ago […]

Just Cause 3 Officially Announced For Xbox One, PS4 And PC, And Will Not Have Microtransactions Or Be Free-to-play

Following a series of leaked images Avalanche Studios have officially announced the existence of Just Cause 3. The announcement game via Game Informer magazine where Just Cause 3 will be featured on the cover, and seemingly the big reveal wasn’t due to the leaked images, instead it was […]

Elite: Dangerous Gets A Release Date

Back in November of 2012 the developers of Elite: Dangerous launched a Kickstarter which raised a whopping £1.5-million . Since then then backers have had access to the game across several different betas and alphas. Today, though, the game’s official release date was announced as December 16th. The […]

Ubisoft have announced what your rig will be needing to run Fa Cry 4 when it arrives on November 18th. Not surprisingly you’ll need a relatively good CPU at even minimum specs and a good graphics card. At max settings Ubisoft are recommending a pretty hefty setup including […]

CD Projekt Red have announced today that anybody who wns The Witcher 3, regardless of platform, can look forward to getting 16 pieces of free DLC. In an open letter CD Projekt co-founder Marcin Iwiński took a mighty swing at current state of affairs where heaps of DLC is […]

Star Wars: Battlefront To Launch in 2015 Along With Battlefield: Hardline, Battlefield 5 To Arrive in 2016

Ea have had a busy day. During an investor call today EA revealed that the new Star Wars: Battlefront game from DICE will be releasing in time for Christmas 2015. They followed up with an official announcement via Twitter: May the Force be with you: Star Wars Battlefront […]

Telltale’s Game Of Thrones Still Due To Release This Year

If you’ve been wondering whether Telltale’s episodic Game of Thrones game will arrive this year as promised then have no fear because one of the company’s PR reps has confirmed that the first episode will indeed arrive by the end of 2014. When questioned about the Xbox One […] 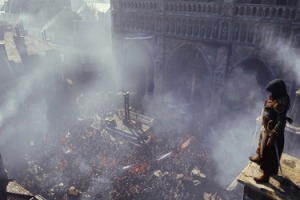 Ubisoft have revealed the minimum and recommended PC system specs for the upcoming Assassin’s Creed: Unity, and they’re a tad terrifying. Even the low end specs are actually quite demanding, while the recommended setup will scare all but the most hardcore PC lovers. Either the game is […]

The Incredible Adventures of Van Helsing Coming To Xbox One

It seems that The Incredible Adventures of Van Helsing is coming to Xbox One at some point. The news comes via the game’s official Facebook page where the above image was posted, along with confirmation that it will run at 1080p and 60FPS. When asked in the comments […]