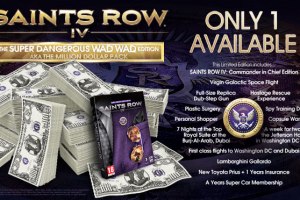 Deep Silver have gone off the deep end by today announcing the Super Dangerous Wad Wad edition of Saints Row IV.  Only one of these monstrous edition’s is actually available to purchase and that’s because it costs a stupendous  $1,000,000 to purchase. Rather oddly the pack is priced […]

Koch Media Announce That They’ve Acquired Saint’s Row And Its Developers, Along With Metro. Will Announce Plans For Both In the Coming Months